Hi, I’m Jonathan Higgs and i’m the singer and the guitar player in Everything Everything. My current setup is the Rocker 32 combo, it’s a pretty versatile amp. You can use it in the studio and we have done, but it really comes alive on the road, it’s very resilient and it sounds great on stage.

The best thing about the amp if the simplicity, its just basically a big volume knob, it’s just simple; you turn it up and there you are. You can sometimes get bogged down in all sort of settings with amps but this is nice and simple. 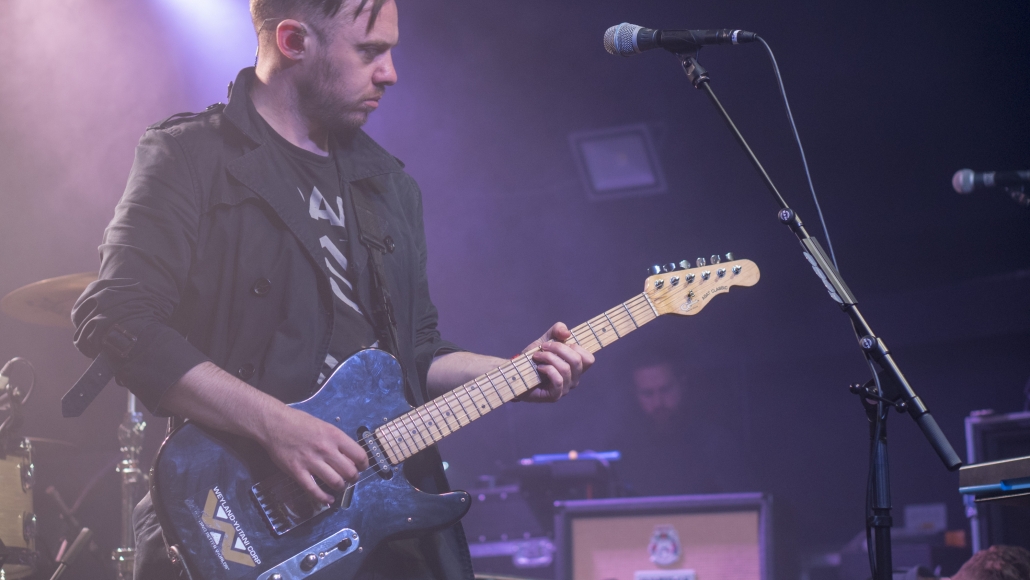 Hi, i’m Alex and I play guitar in the band Everything Everything. So at the moment i’m using the Orange Rockerverb MKIII, I decided to go for the Rockerverb MKIII because it has a very high Wattage and I wanted an amp that was really clean. It’s got loads of headroom, I want an amp with loads of headroom, so I can keep bumping it up and I am not hitting any compressed ceiling. 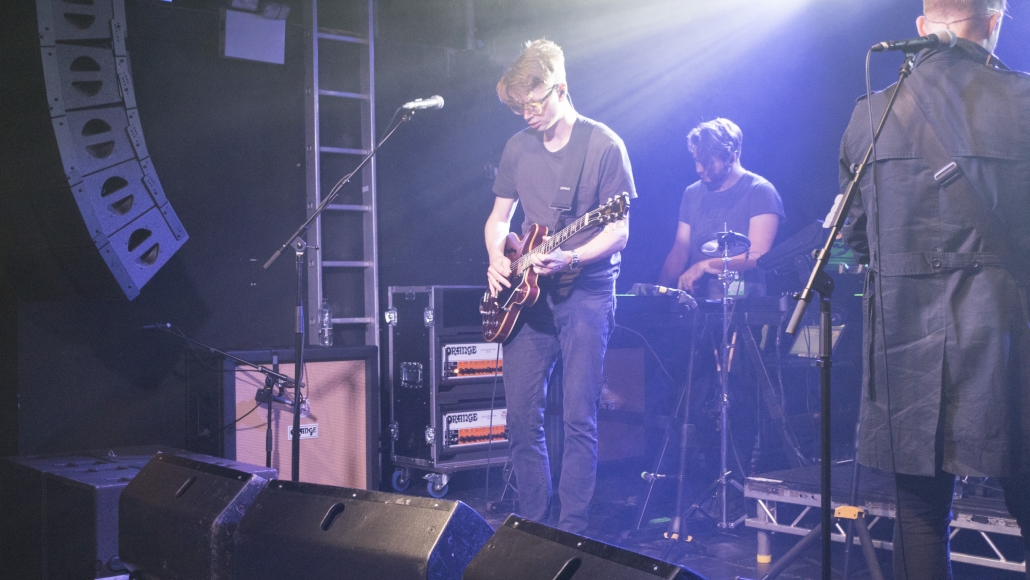 So i’m running the AD200 head and the 8×10 cab and the pedal board goes straight into that and it just covers everything you need in terms of frequency response on stage. I’ve always favoured any amplifier with just very high quality but simple components. I’ve always liked the heritage of the brand as well. 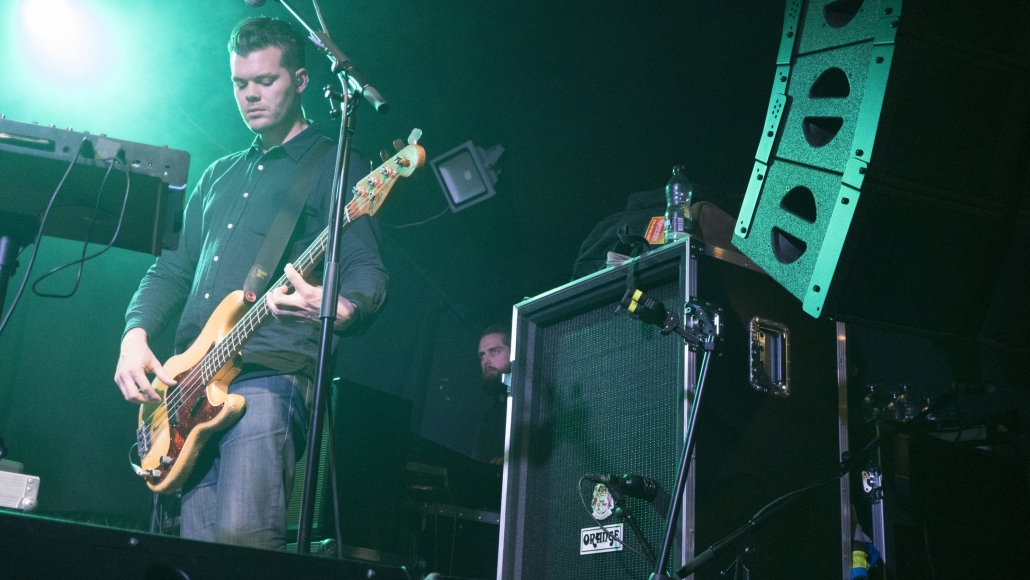 The actual look of the cabinet design and the head design is so distinctive, so you always knew if you were watching someone playing Orange. I used to go see bands like SUNN O))) and Sleep, really heavy stoner doom bands and they would always have these very distinctive cabinets and heads on stage. And a lot of those bands that i was really into and still am used Orange.

Plus our mates Foals, who have such a ferious live sound, Walter was always using the 8X10’s and Jimmy’s entire guitar rig is Orange. Even when I was a teenager and seeing Noel Gallagher with that classic Orange look was really memorable.

Jose: What’s up everybody, my name is Jose Rios of the Free Nationals, Anderson Paak we out here, 24 Carat Gold tour with Bruno Mars and I’m here with Orange Amps.

My first memory of Orange Amps, I was digging through Youtube and I was watching a Stevie Wonder clip and I noticed him using one of your guys cabinets. I was like wait this guy is a keyboard player, found out it was guitar amp, did my research and looked at the Rockerverb 50 and that was the one I wanted.

My current rig is a 410 celestion cab with a Rockerverb 50 MKIII head. I usually keep the bass around 7 o’clock, treble around 5 and there is no mid on that one. Volume is usually around 4, I do clean, I always drive the clean channel. All my effects is on the pedalboard I use.

The Rockerverb helps a lot because its got a lot of power, I’m playing really big arenas and festivals, so I need the push, I need to get on top of everything. It helps me because we have our rock moments in the set and a lot of metal guys and it has a nice creamy tone when I dial it in right. It helps a lot man, I love it.

Hank : Hey what’s up everybody I’m Hank, from Lionize, I play the bass.

Nate: I’m Nate from Lionize, I play the guitar, and we are here at our Black  Heart in Camden Town, London.

Hank: We are in our van, outside of that place.

Nate: We are in an alley in Camden.

Hank: We are in an alley in Camden, which is very homey!

Amp wise for me its two things and two things only. Its tone and reliability, if the amp sounds great but shits out every three gigs, its for the garbage pile.

Nate: One show even and soundcheck.

Hank: This my favourite amp ever and now i’m selling it!

My rig on this current tour, is the same rig as the home US tour, minus a speaker cabinet. Its an Orange OR50 going into a PPC112, thats AB’d with a 1976 Marshall JMP 212 Combo.

Hank: My rig on this run, I’m playing an Ampeg SVT Classic through the OB15 and OB410.

Nate: I always have an Orange cab in my rig, for specifically in guitar speaking for the low and mid. There is no low end resonance like an Orange 412, even the 112 is shockingly vibrant and resonant. They are quite heavy but I think once that wood connects with the floor, that’s how you get that sound. So gladly lug it up any set of stairs.

Hank: I go back to Orange simply because it adds an element of grit for me bass playing wise. Its add some dirt in a way that other cabs dont.

Nate: Different bands measure success on a spectrum, for some its money. Some its…

Nate: Lobster and hookers. But I think for a band like us because we are such fans of music and looking at the web site and seeing our name on same list as Stevie Wonder and Jimmy Page and Geddy Lee and Billy Gibbons. We are going to go along and say that’s a pretty nice notch on the old success…

Nate: Headboard! We measure success in headboard notches! Thats one of them! And Lobsters and Hookers!

Sef is the guitarist from Canadian rock band Your Favorite Enemies (http://yourfavoriteenemies.com/welcome-biam/). Sef is an interesting dude, to say the least. He, along with the rest of the band, all live in and rehearse in a church they purchased. It’s a seriously huge church too. Like, “holy crap you bought this?”-huge.

Now Sef has done it again and provided us with an extremely irrelevant, but thorough, review of his new favourite amp: the Orange Custom Shop 50 (https://orangeamps.com/products/guitar-amp-heads/custom-shop-series/custom-shop-50/). Check out the amp and check out the church in the video above!