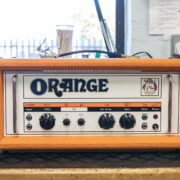 Over the past month, we’ve been taking care of an original Orange OR120 head from 1974 that was sent in by its owner for a tune-up before being passed down to their son. In the previous entries, we’ve had a look at the unit’s history and legacy, as well as how we’ve fixed it up for use in the modern age. Now, it’s time for the ultimate proof of the pudding — plugging in a guitar. All guitar sound samples in this post were recorded on a PJD Carey guitar with a single-coil pickup at the neck and humbucker pickup at the bridge.

The first thing to say about this amp is that it’s LOUD. Like, incredibly loud — louder than any modern Orange amp by quite some margin, to the extent that it is perhaps even less of a mystery now why so many 1960s and 70s rockers are suffering hearing loss in their dotage. We ran it through an Orange PPC412 speaker cabinet at about one-third volume in a space about the size of an average rehearsal room, and it was already dishing out instant bouts of tinnitus, and demanding ear defenders all round. Given that the amp’s sockets allow for the connection of two speaker cabinets, too, the potential of this beast is massive.

That sheer muscle is perhaps an indication of the era in which the amp was designed and built, before the age of complex, high-powered PA systems in the early 80s but shortly after the arrival of stadium rock and the outdoor music festivals of the early 70s (the original Woodstock was August 1969 and the first Glastonbury June 1970, for example). During that time, bands were largely expected to bring their own noise, and not to expect much in the way of a boost from a PA system. And with that in mind, the OR120 rigged up to a couple of 4×12 speaker cabinets would have no problem in filling huge spaces.

What’s more, with stage monitoring technology still very primitive back in the early 1970s, there was an expectation that you needed to be able to hear your playing directly from your amp on stage, even if it was 50 feet away and there was a rhythm section smashing away in between you and it. The OR120’s power could deliver all that with confidence, and was clearly designed specifically for that.

How the amp achieves this volume is mainly down to the huge 500 V voltage in its circuit, which is far greater than modern amps and will offer miles more clean headroom. Four power valves and a simple pre-amp circuit that doesn’t subtract too much gain from the signal also helps. There are also fewer tone stacks in the OR120 than a lot of its successors in the Orange range, which would account for less gain loss through the signal chain.

The amp’s tone is also an interesting indicator of its age. With all dials set to the middle, it’s remarkably clean and chiming, with plenty of heft and three-dimensionality, if not quite the character of Orange amps of the new millennium.

However, the unusual F.A.C. control, a six-point notched dial that subtracts increasing amounts of low end from the tone, has a huge impact in shaping the tone, making the sound increasingly brittle and bright as it’s introduced. At its farthest extreme, this sounds piercingly trebly to modern ears, but revisiting the records of the second half of the 60s and early 70s by the likes of the Beatles and the Byrds, for example, reveal this to be the sound of contemporary guitar music, suggesting Orange to be on the cutting edge, as ever.

When the F.A.C. is combined with higher gain and into overdrive territory, however, it adds a definition to the tone that counterbalances the slightly muddiness of the basic overdriven sound, and proves to be an invaluable component of the amp’s tone-shaping toolbox.

The two-band EQ is also surprisingly powerful, with the range of both knobs allowing considerable variety to the shape of the sound and consequent versatility, presumably another feature included with the idea of helping the guitarist onstage with a noisy band around him. Similarly, the HF. Gain knob has slightly more subtle control, moulding the mid–high tones in much the same way as a modern-day presence control would, but its interaction with the gain knob is still well incorporated.

Another interesting sign of the times, tonally, comes in the form of the OR120’s only modest overdrive capabilities: the amp’s noticeably clean chime only starts to break up as the gain is pushed up beyond about three-quarters, and there’s a lot of “edge-of-breakup” territory where the tone’s fuzz is largely dictated by the player’s technique. Furthermore, the absence of a master volume knob means that you have to be playing through the amp at an exceptionally loud volume before any semblance of break-up or overdrive emerges. Even at full gain, though, it’s a long way from the fully saturated tube screamers of the 1990s and beyond, and retains more of a British punk/Sex Pistols sound, with grit and ferocity, but also quite crisp (although whether the likes of the Steve Jones, who famously stole his early instruments, ever got his mitts on an OR120, is a moot point).

This marks the OR120 as an interesting artefact of rock music history: even in 1974, when this amp was made, three years after Led Zep IV and Paranoid had ushered in the dawn of heavy metal and huge-sounding rock music, guitar tones remained fairly polite, and the appetite for extreme howling overdrive was still clearly in its early infancy. Understanding that somewhat recontextualises those classic albums as real sonic boundary-pushers, and also serves as a reminder that the bloom from crunch into thrash and total saturation would take another few years — and perhaps the introduction of a master volume control. And we’ll have to wait for another Orange relic to arrive on the bench before we dig into that.

Zach Person – Orange Jams with Jam in the Van