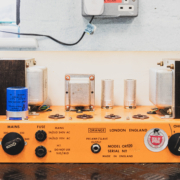 A couple of weeks ago, a fairly special old amp arrived at the Orange workshop — namely an original Orange OR120 from 1974 — in fantastic condition considering its age. The owner explained that it had been in storage for a while and wanted it returned to its former glory, so we were only too happy to oblige. In the previous blog entry, we looked a bit at the OR120’s history and legacy, as well as this particular specimen that’s been sent in. Today, with our head technician Jon having worked his magic on the old thing, we have a look at what needed doing to it and why, and how we got it ready to play again.

WHAT WAS FIXED, AND WHY

What should be said first is how little needed fixing on this 48-year-old amp: the circuitry, transformers and choke have all stood the test of time perfectly, which could be said to be a testament to Orange’s sustainability.

Some parts did need swapping out for new ones, but thankfully these are relatively inexpensive and still easy to come by. Perhaps the most important and easiest change was the valves — both the pre-amp valves (a pair of ECC83s) and the power-amp section (a quartet of EL34s). The pre-amp valves had become “microphonic” over time, meaning that they had grown undesirably hypersensitive to noise, and the power-amp ones are no longer matched, drawing differing amounts of current during use and therefore inhibiting the consistency of the amp’s performance. These valves just needed swapping out of their sockets, and new ones putting in their place.

The other main change was to the amp’s electrolytic capacitors. A little like rechargeable batteries, capacitors’ abilities to store electric charge declines unavoidably over time, and 48 years is a good innings for one of these specimens! When they start to lose their efficacy, the sonic effect is a flat, undynamic response from the amp, and an increase in “ripple” — a jagged, distorted sound (and not in a good way), and a constant buzzy hum. Changing over the capacitors required a little more technical skill with a soldering iron and a steady hand, but thankfully our tech Jon was on hand:

The eagle-eyed will spot that it’s not only the colour, but also the size and shape of the new capacitors that differs from those of the 1970s originals. However, in terms of their spec, it’s an exact like-for-like swap; the modern, slimmed-down versions are just a result of technical and manufacturing improvements over the past half-century.

GETTING IT READY TO PLAY AGAIN

Normally, when a vintage amp arrives in the workshop that hasn’t been switched on for several years, it’s good practice to gently reintroduce voltage using a variable transformer (the “variac”) that allows the user to vary the number of volts entering a system. Starting at zero and slowly increasing the number over a number of hours, it ensures that an old system isn’t given too much of a jolt, and subsequently overloaded, on its first resurrection.

When this particular OR120 first arrived, it was clear that enough needed changing that it wasn’t necessary to turn it on before the first fixes: the capacitors were visibly blistered, and the valves were not performing ideally on a valve tester. However, once the unit had been returned to its full working condition, it was crucial to run it through the variac, gently upping the voltage over the course of an afternoon, while keeping an eye on the current it was drawing, before actually putting an electric guitar through it — a treat that will have to wait until next time.

COMING NEXT TIME: How the refurbished OR120 sounds when returned to its former glory, complete with audio samples