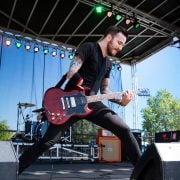 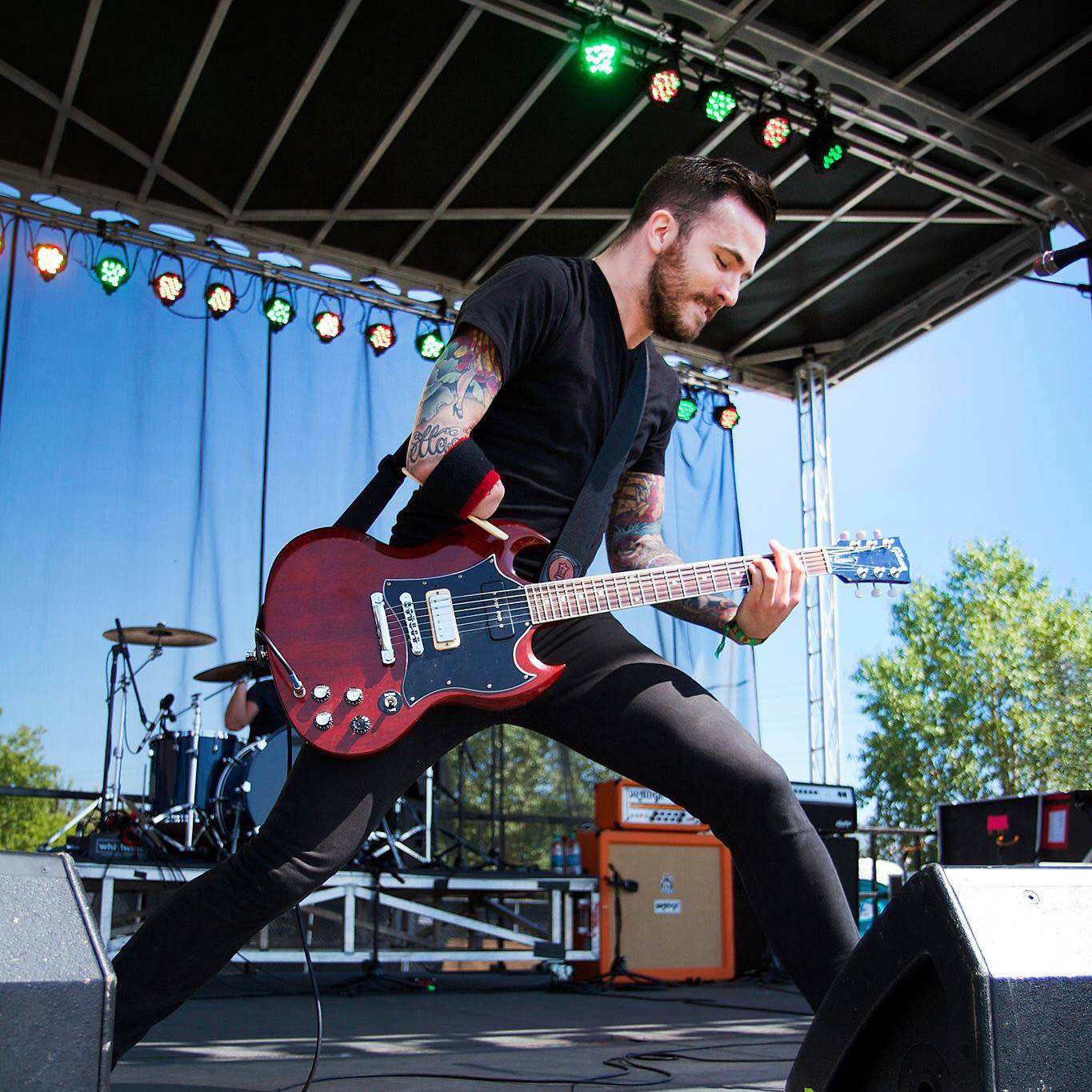 First of all, can you introduce yourself?
My name is Dan Aid, I live in Denver, CO, and I play guitar in Authority Zero.

Can you tell us a bit about the band you’re in – how you guys met, and how long you’ve been together?
Well, Authority Zero has been playing shows and putting out records since 1994, but I first met Jason and the crew in 2013. My other band, Wiredogs was opening up for them at The Marquis in Denver, and we just sort of ended up hanging out that whole night. Then every time they came through Denver after that, whether I was playing with them or not, we would always meet up and grab dinner or drinks and catch up. I got a call from Jason a couple of months ago asking if I could fill in for a couple of shows on Flogging Molly’s Salty Dog cruise, and then we got offered the Japan tour right after that, and then the dates with Pennywise came up, and then the US/Canada run, and then Europe, and I just kept saying ‘Yes!’ to everything, and that’s how we got to where we are now. Mostly I just feel really fortunate to be in this situation where I get to step into a family that has been working at this thing for 20+ years. It’s a very tight knit crew, and there’s a huge amount of heart and respect that go into every rehearsal and show, and I’m stoked to see what we create through the end of this year.

Was there anyone or anything that got you into playing in the first place?
My dad always had his guitar out when I was a kid, and he would play old Dylan tunes or Phil Ochs, and my sister and I would sing along. He then bought me this little Montana acoustic for Christmas when I was eight years old. I would sit down with this red spiral notebook of my dad’s, where he had written out all the lyrics and chord changes to his favorite songs from when he was a teenager, and I would just learn the songs by ear, and when I came across a chord I didn’t know he would teach it to me and I’d keep going.

Do you remember your first ever encounter with Orange?
The first orange amp I ever had the chance to play was a tiny terror. I remember plugging into it, shifting those three knobs into every possible configuration, and loving every tone and sound that came through it. I have never in my life had that experience with another piece of gear. In every other area of trying to create sounds for live shows or in the studio I’m always fidgeting with knobs, adding gear into my chain, taking other gear out of the chain, a constant struggle to capture something that my ears love. But with Orange, so far in my experience of it, I just have to plug into it and I get inspired by the tones that already live there. Plus they look cool. The first guitar player I ever saw playing orange was Lawrence from Mighty Mighty Bosstones. I was 14 years old at the Ogden Theater in Denver, and I distinctly remember the Orange full stack he played with the cabs and head wrapped in the white tolex. It seemed like every other guitar player in the mid 2000’s who was playing punk was playing the JCM Marshall series heads, so the orange aesthetic immediately jumped out at me.

How long have you been using Orange, and what’s your current set up?
I’ve been playing Orange amps for almost four years now. I currently use an AD30HTC head through a PPC412 cab, and I love it.

Playing with one arm you’ve been faced with a lot of challenges other guitarists haven’t, was there times you wanted to give up?
When I lost my hand I think there was a lot that felt unknown. From tying my shoes, to taking a shower, to playing guitar I didn’t know exactly how I was going to do any of it. But honestly, I’ve just figured out each of those things as they have come up. I’ve had to figure out my way of doing everything, and sometimes I’m successful and sometimes I fall on my face, but that’s just life.

What made you keep going?
I mean, I love music, and I love playing guitar, and I love writing songs, and I love sharing those songs with people. I have to do this; It doesn’t really feel like a choice. It’s where I feel the most alive, and that affects every other aspect of my life. So I guess I kept going for me, because playing music is where I feel the most powerful. And I kept going for my family, because we all lost a hand, and that sucked, but we all also have worked for and created all of these beautiful moments that I am getting to experience now. No success I have had playing guitar was created solely by me. It was created by the years of love and support from family, friends, fans, and anyone who has reached out and given a fuck and kept me going over the years.

Growing up, who was your musical role models?
Green Day and Rancid were the bands I discovered that really spoke to me as a kid. Green Day made playing the guitar feel accessible, with the simple, but super hooky riffs. Insomniac was the first record I ever sat down with and learned front to back. I feel like I really learned how to write songs from listening to Rancid records, and I feel like I learned how to put on shows from going to Rancid shows. Meeting Lars and Tim when I was 15 had a huge impact on me, they were just very human and encouraging. I wouldn’t be doing what I’m doing now if I hadn’t discovered those records and had those interactions at that age.

When you’re not busy making and playing your own music, do you tend to go to other gigs?
I do. There are a ton of great local bands in Colorado like Wire Faces, Spells, In The Whale, and Slow Caves, so I love going out and seeing friends do their thing as much as I can.

What sort of advice would you give to young aspiring musicians faced with similar disabilities as yourself?
We all get knocked down. It’s how we choose to respond in the dark moments that defines who we are.