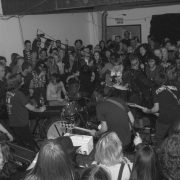 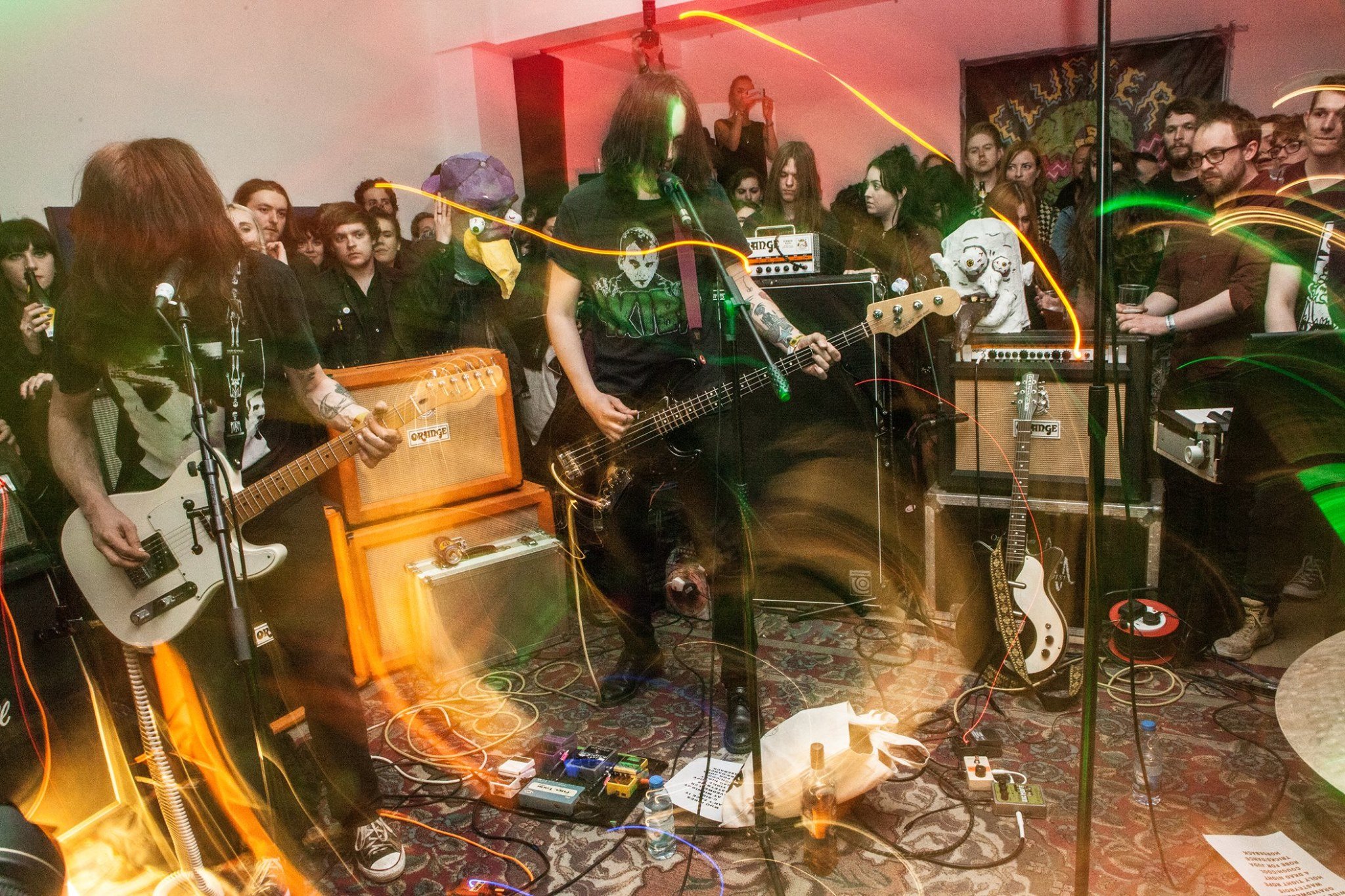 The Wytches, by Keira Cullinane

Last weekend Orange teamed up with Fluffer Records for their two sold out Fluffer Pit Parties headlined by Brighton’s dark psychedelic surf rockers, The Wytches. The whole Fluffer pit party concept ‘no stage, band in the middle, crowd 360’ has been taking over the East London music scene over the last six months, with the anticipation for this specific weekend having been high. 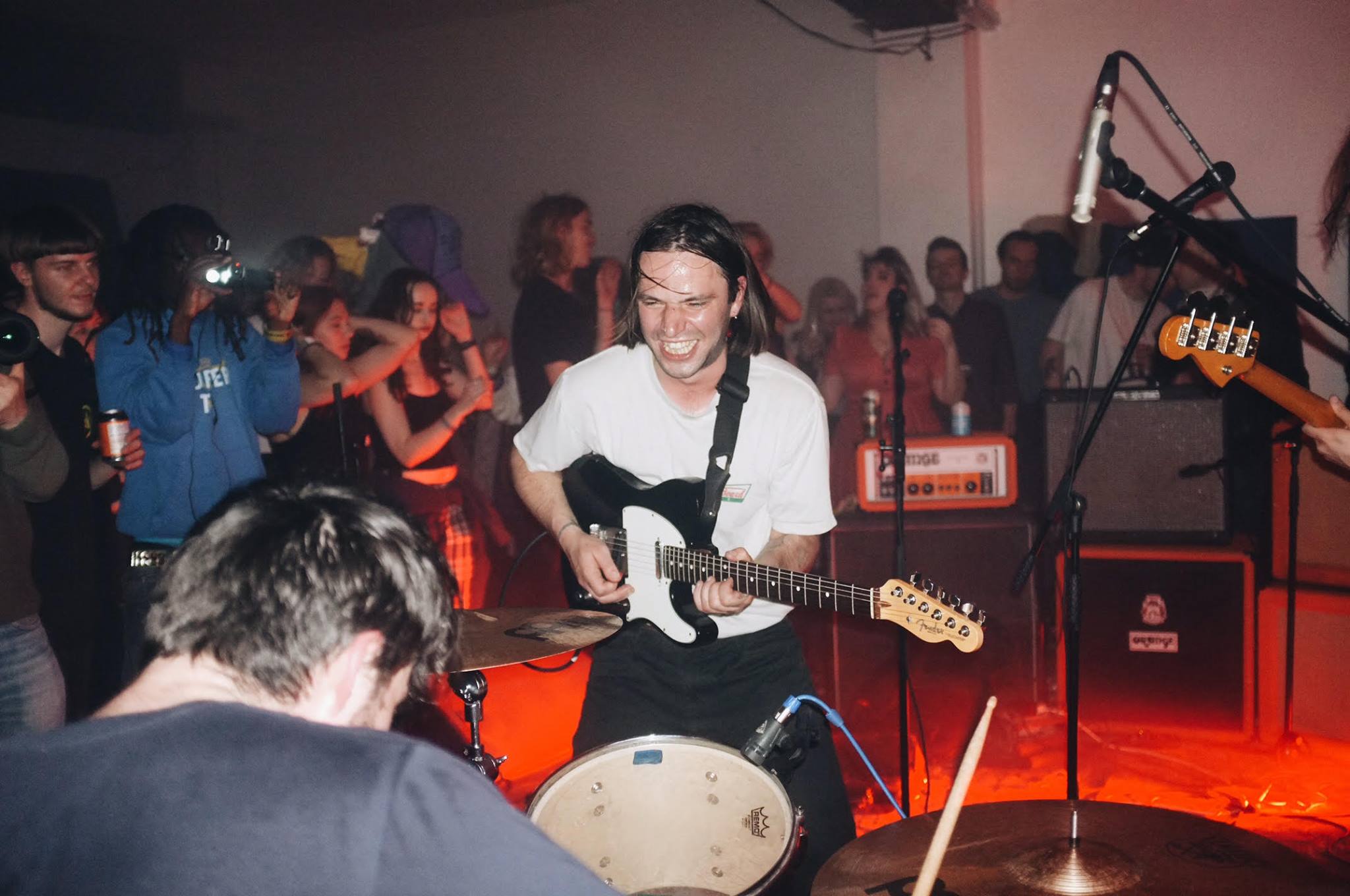 Friday night saw performances from three incredible support bands as well as The Wytches – First out was The Hungry Ghosts who delivered an astonishing performance of their slaughterhouse blues – they set the bar high! Luckily Phobophobes rose to the challenge, and kept the show going until Virgin Kids took over and delivered an absolutely killer set, which was their first one back from their recent 30 date UK tour. 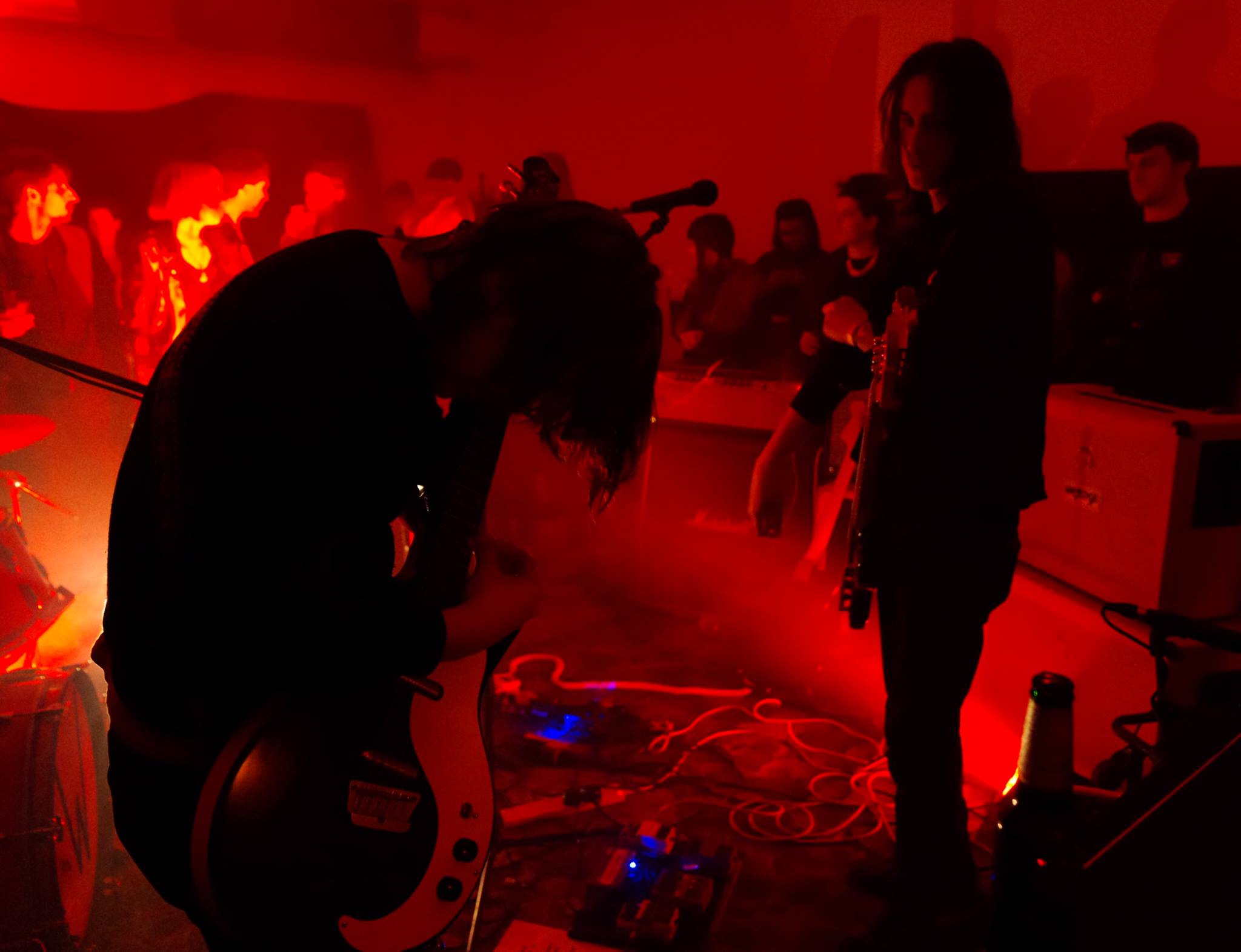 The Wytches, by Simon Shoulders 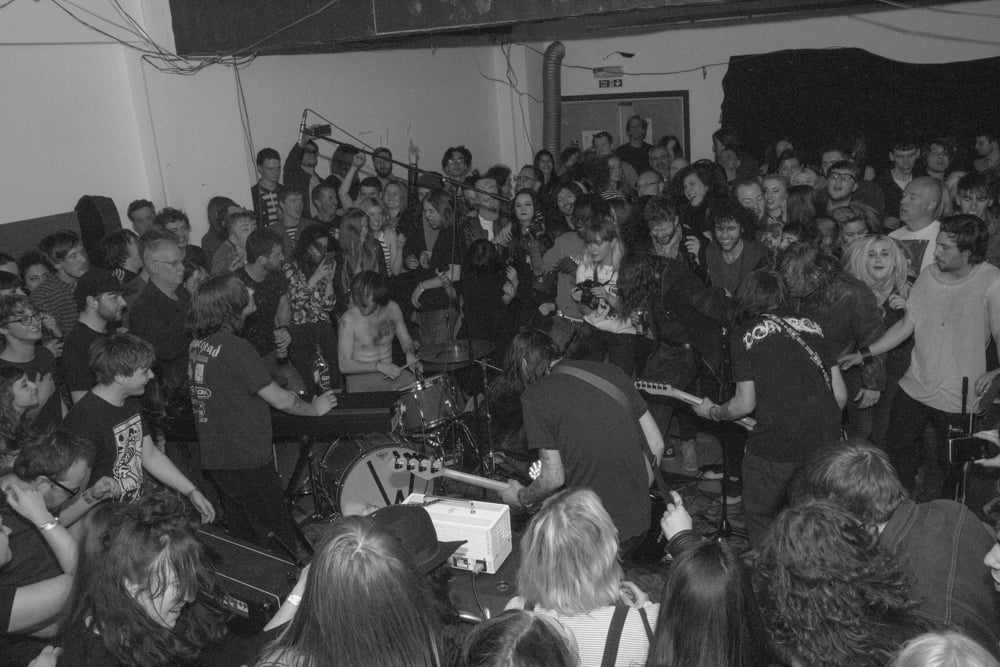 The Wytches, by Freddie Payne

Not too long after, it was time for The Wytches to enter the pit. The ones we’d all been waiting for, the main course. They enter the pit with confidence, and it doesn’t take long before the entire crowd is moshin to the sound of their fuzzy guitars and Kristian screaming out vocals. There’s Fluffer monster heads floating around in the pit, and you get to that point where you’re not quite sure who’s sweat you’re covered in, but it doesn’t really matter anyway, cause that’s what the pit’s all about – the band and the crowd basically being melted together in a big pot of noise, sweat and alcohol. After finishing their set, Kristian smashes his guitar before climbing out through the crowd. If I were to describe what I just witnessed, my only words would be ‘holy shiiiiiit!!’, so I decide to ask the guy next to me what he thought about the whole shebang, hoping his vocabulary is a bit better than mine; 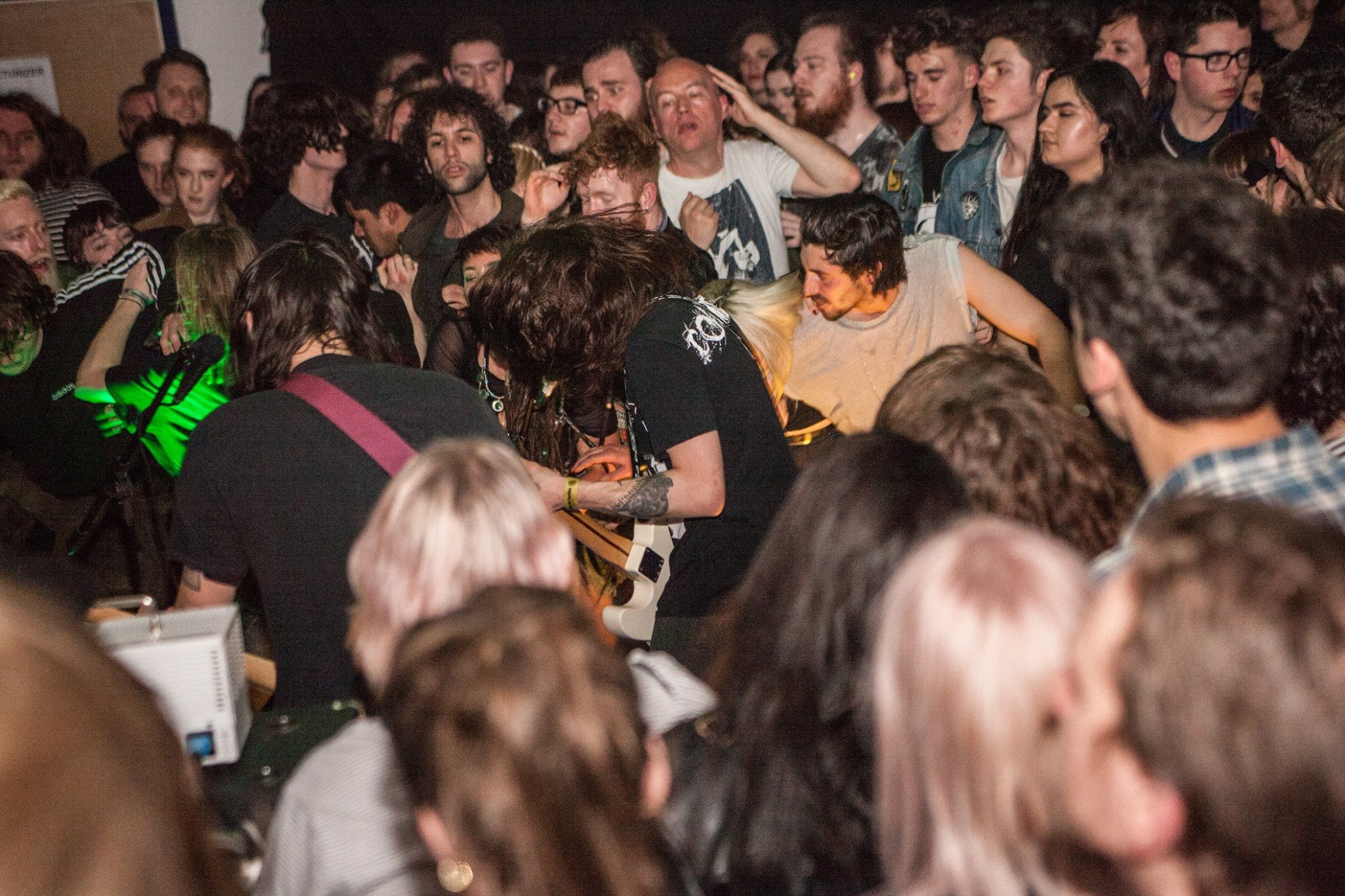 «The gig in itself was ecstatic. The atmosphere built up throughout the whole event, and everyone seemed to have gathered energy until the very last act. The place was a beauty! The concept of these pit parties is what most rock fanatics have been waiting for a while, a night out with live rock and old tunes until the very late hours of the night. The freedom of being able to gather as an audience around the band is the best and feels much more intimate. Great stuff!»
Max, 20

Despite having a pretty sore head from my 10+ Jack & Coke’s the night before, I wake up the following day well excited for yet another pit party. As I arrive at the venue I find the bands outside on deck chairs in the sun, drinking beer and talking amongst themselves. Before entering the pit room I hear a couple by the merch table saying they had flown in from Norway to attend the event, and that they loved the idea of the whole ‘band and audience becoming one.’ 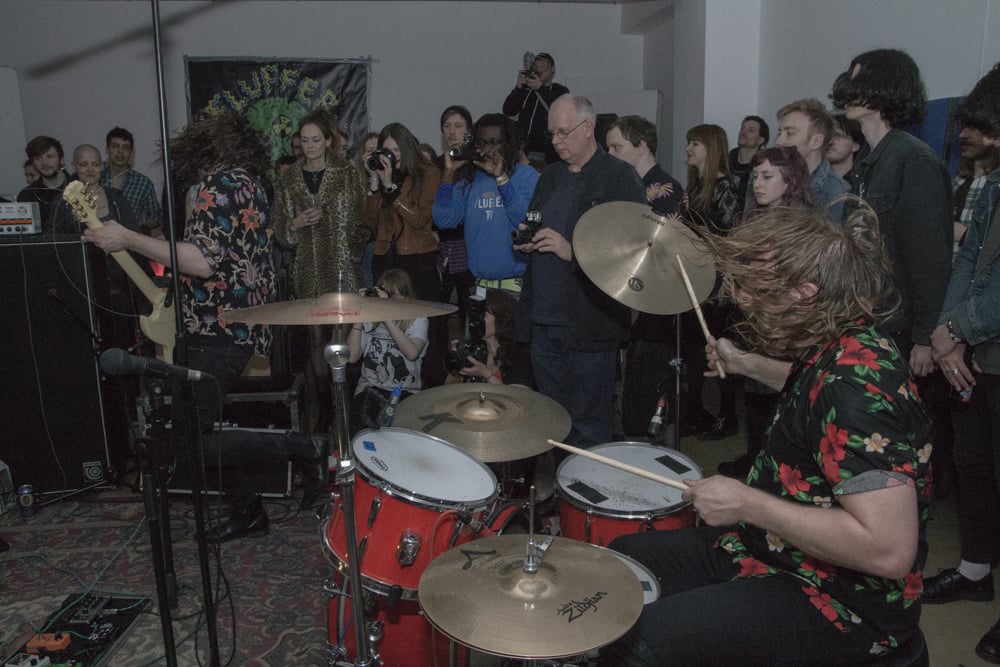 At 8pm, it’s time for Vulgarians to open the show, before punk band The Bodies takes over. The whole room is buzzing with excitement, everyone downing their beers so they can get enough drunken courage to start moshin’ around a bit. Dynamic duo and noise connoisseurs Love Buzzard is main support and delivers an energetic and aggressive performance, making me wonder how on , making sure the crowd is left on a high before The Wytches comes back for round two. 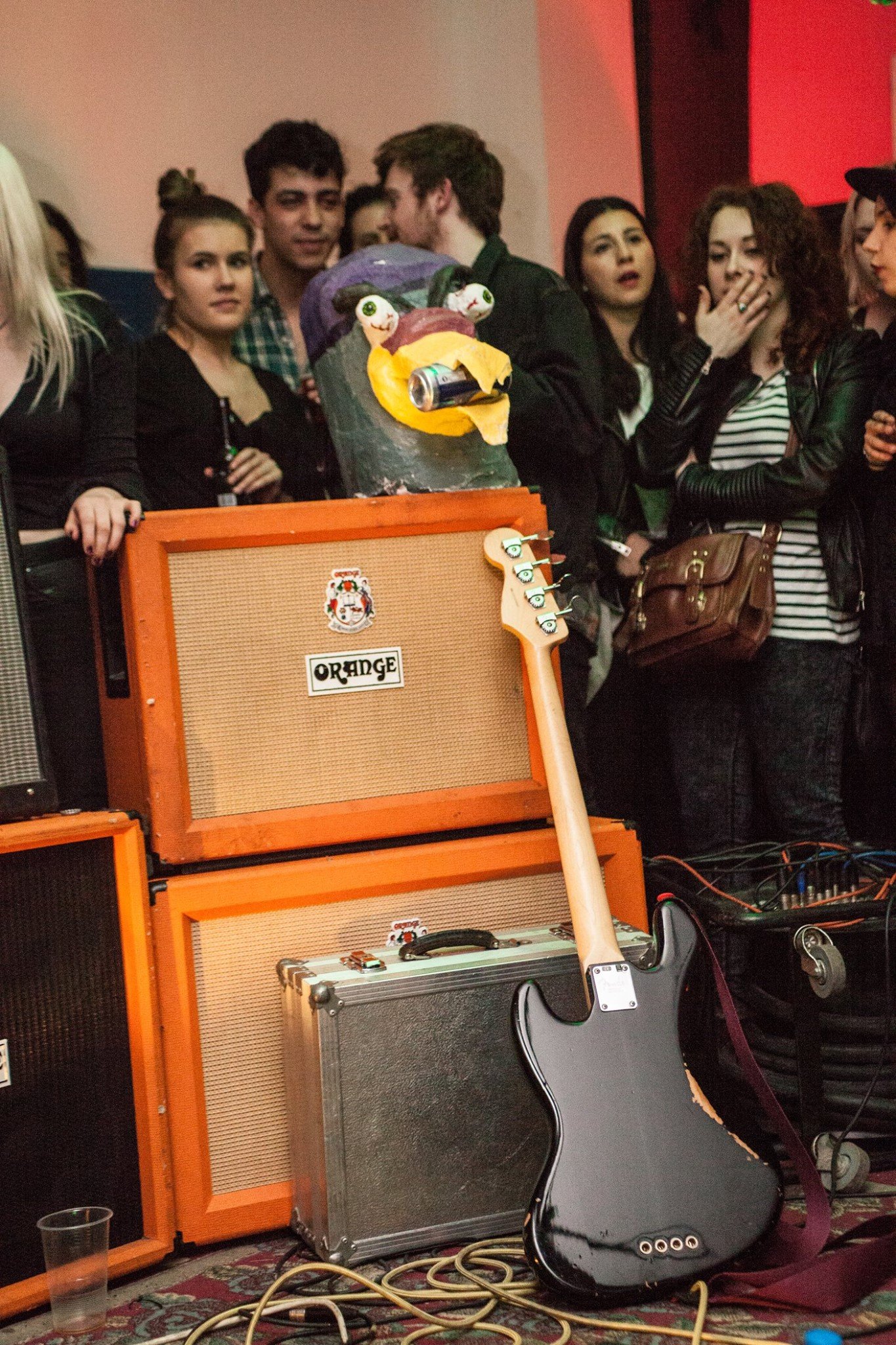 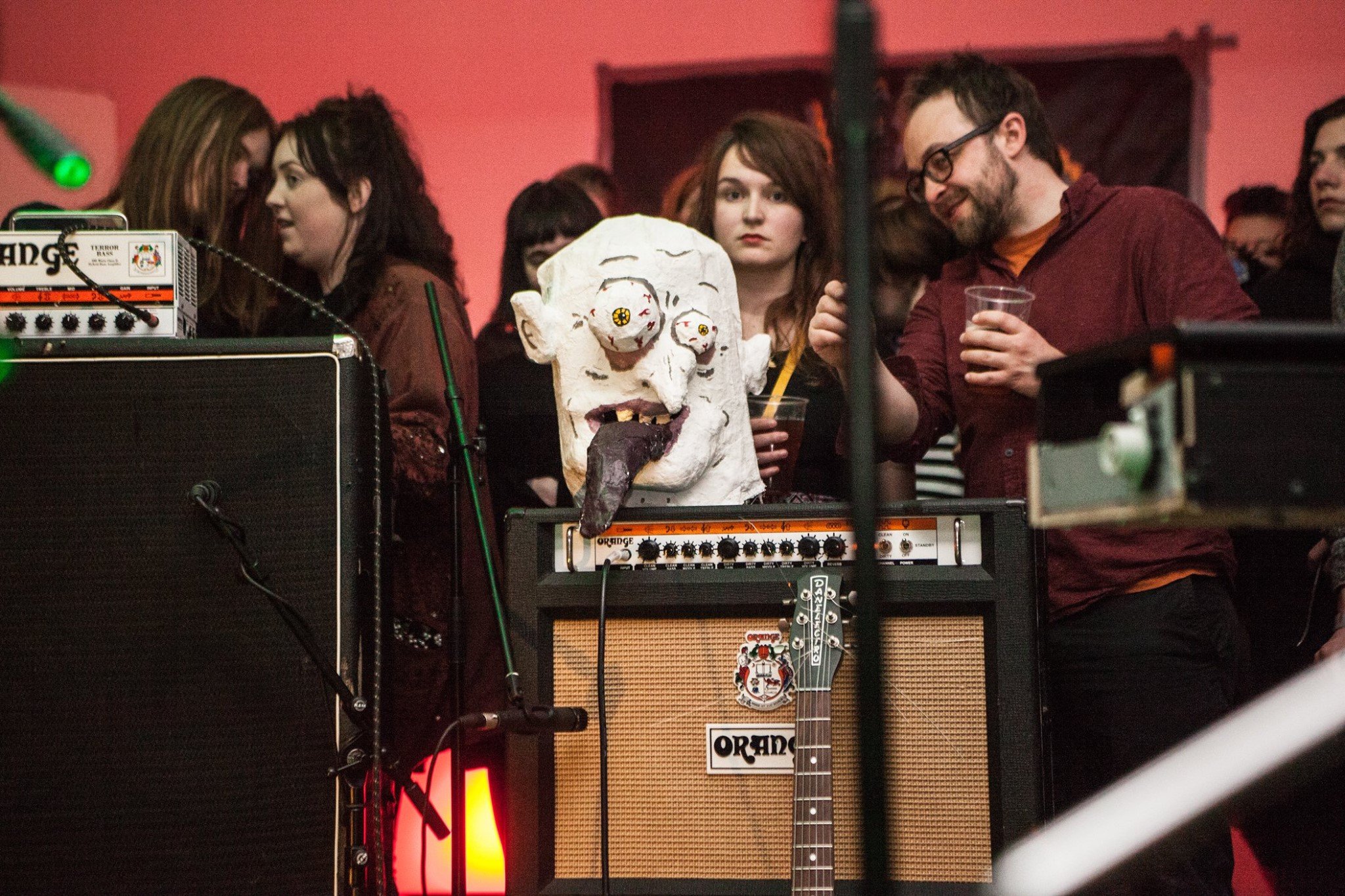 I somehow thought the pit couldn’t be any messier than it had been the night before, but boy was I wrong – the entire room explodes, there’s people crowdsurfing everywhere as well as paper mache monster heads being thrown about. A few heroes in the front work as a human shield between the crowd and the band, as the masses are raging behind them. The Wytches somehow managed to be even better than the night before, and as they finish their set on a high, drummer Gianni leaps out into the crowd, and crowd surfs through the room and to the exit. We’re all left covered in sweat, not really sure what we just witnessed, except for the fact that it was utter madness, in the best possible way. 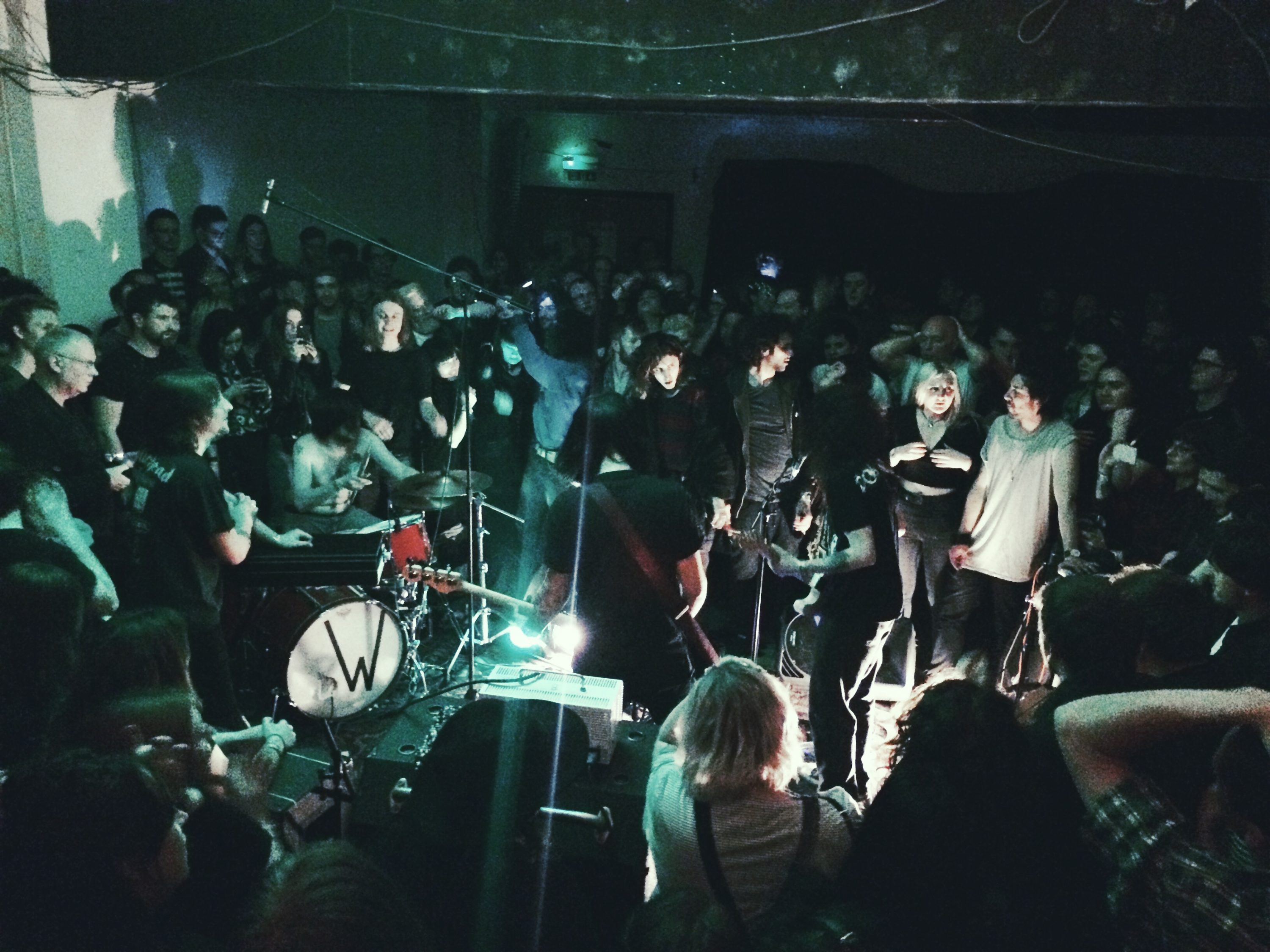 The music, the mayhem and the madness, by Ella Stormark 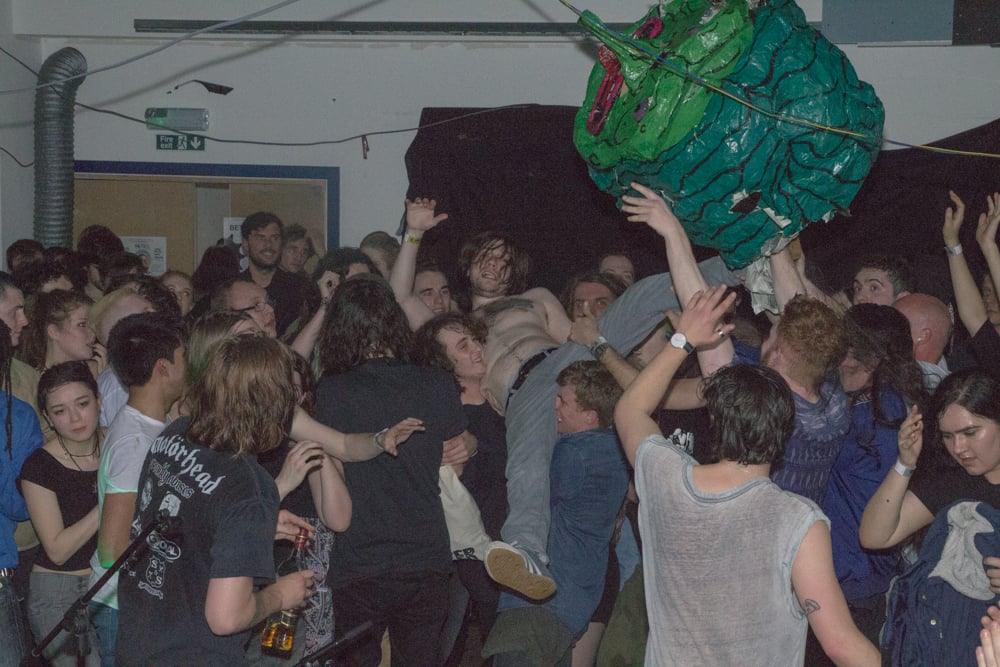 Post gig, I grab a hold of Wytches bassist and Orange Ambassador Dan Rumsey to get his thoughts on playing a show like this, and how that last two nights have been; 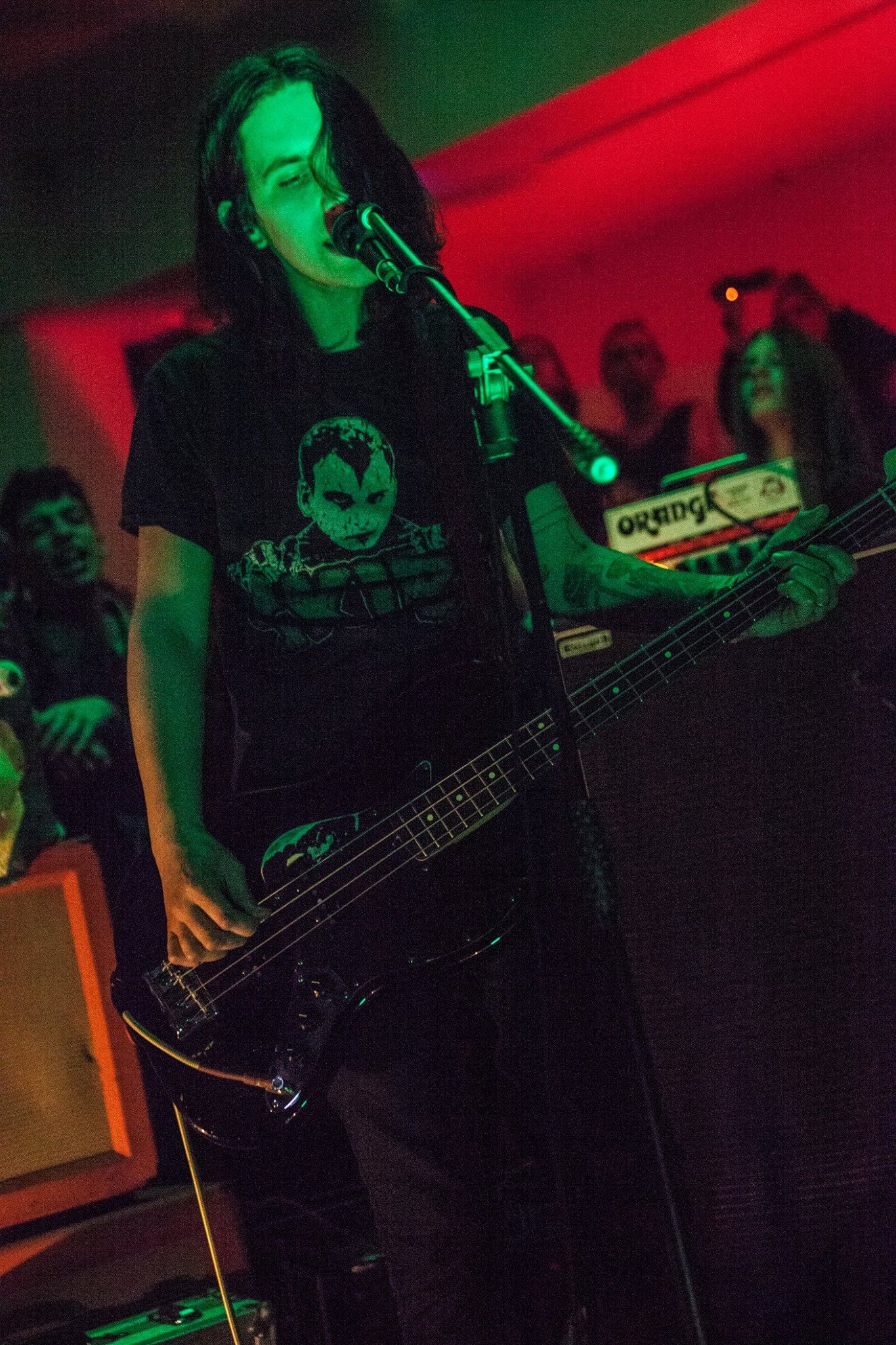 «It’s great because it’s something new. There are a lot of promotors out there putting on a lot of small gigs that are poorly attended so you need to have something else to offer these days. That’s why the pit party is good because it’s something interesting and Fluffer went all out in promoting the event with amazing graphics and dedicated online presence. I enjoyed it a lot, and it’s going to be tough to top the carnage of that. Especially tonights show!»