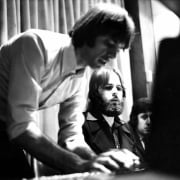 We started to build the Orange Studio in the basement at 3 New Compton Street in the summer of 1968. I worked with Brian Hatt, a good friend of mine and an excellent studio technician. Brian Hatt was also a good producer and musician, and played in the band Candy Choir. That summer we both burned the midnight oil for several months building the studio and preparing equipment. In those days, every jack socket and loom had to be hand-cut, stripped, wired and soldered – which seemed to take forever! I can remember doubting whether it would ever get finished, or indeed, work at all. Luckily, it did, and we opened the studio for business that same summer. The studio, with its ex-IBC 24-channel mixing desk worked very well.

In those pre-digital times, every module in the desk had four preamp valves – and if you’ve got twenty-four modules in the desk, that is a lot of valves… One effect of this valve situation is that the heat they generated kept us warm in the winter, but very hot in the summer. Valves also wear out, especially as they are often working 24/7, and so the studio’s equipment required ongoing monitoring and maintenance. A good engineer could hear any slight sound differences between each channel, and would become acutely aware of any loss in sound quality between the desk’s modules.

We employed a very gifted designer, Roger Jeffrey, who maintained the equipment and went on to design our Amity 24-track tape machines. I invested in an AG440 Ampex 4-track, which was a state-of-the-art professional tape recorder. With this and the stereo Ampex, we were able to bounce tracks. Our sound engineering had really moved forward and we attracted many famous names including Brian Wilson, Stevie Wonder, Robin Gibb, Mickie Most, John Miles, Paul Anka and lots of heavy metal bands. Our basement studio had a great vibe – it was very large and, as nobody lived or worked on either side, volume wasn’t an issue. Most bands preferred to come in for night sessions.

Hot Chocolate recorded one of their early hits ‘Love Is Life’ at the Orange Studio with their producer, Mickie Most. Many of our own studio engineers went on to become world-class producers and engineers. The Orange Studio is where Steve Churchyard learned his craft from Brian Hatt. We gave Steve his first job as a trainee engineer when he was eighteen, and he stayed with us for three years, before landing a job at Sir George Martin’s legendary AIR studios. Currently Steve lives in LA and has worked with just about everybody – world-class artists such as The Eagles, The Darkness, George Michael, and Sheryl Crow.