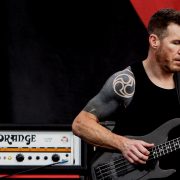 Tim Commerford: Yo, my name is Timmy C, and I play bass for the ‘Prophets of Rage’ and I did some bass playing for a band called ‘Audioslave’ and I’m the bass player of ‘Rage Against the Machine’, and I’m here to talk about some bass with these kids from Orange amps.

I think I was more influenced by the feeling of bands like the ‘Sex Pistols’ earlier on but then I gravitated to more intricate, progressive rock and became a Geddy Lee fanatic. He actually was playing this amp that I am standing on and I was searching for a certain tone. It sort of came from him, the sound he has is similar to what I was looking for.

I have an Ampeg head, Barefaced 8×10 cabinet and then I have another Ampeg SVT pro with a gain control through a 4×10 Barefaced cabinet and then the Orange head. This head is an incredible head for just going to that next level of overdrive. When I want to push it into a higher end, not going crazy but more into the white noise and the higher distortion; This head is a beautiful amp for that. I have different amps for different tones and there is all different tones, and there is all different ways that you can make the bass sound even better.

I’m a finger player and I feel like it is a sport and that’s the way it is supposed to be played. I’m on that field with those guys who play with their fingers and realize it’s just like a little miniature body on the end of your arm. It’s a deeper, for me, a deeper science, a deeper low end, a different feel.

Because I still enjoy going on the internet and going “Hey, bass lessons” or “advanced bass lessons”, these videos come up and there are great players out there and they aren’t in these huge bands but they are showing you how to do cool stuff. That’s something I didn’t have when I was growing up as a kid, now any song you want to play is on the internet. So it’s actually a good time to learn how to play an instrument and do it the right way. My advice is to put away the computer for everything expect for bass lessons, its killer for that!