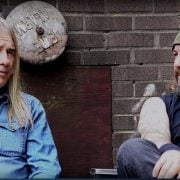 Ade – I’m Ade Emsley of Orange amps and this is Desertfest, I’m here with Matt Pike, from Sleep!

Matt – I’m Matt Pike from Sleep at Desertfest, playing his amps. So I take it you are a bass player?

Matt – I do now too, I just got this Gibson fretless Ripper, its fuckin’ badass! I actually use a Dual Dark Orange and an Ampeg.

Ade – Nice! Do the top end on the Dual Dark!

Matt – I use some of those Earthquaker effects, they have some gnarly stuff.

Ade – I tend to like to bi-amp with the bass, I like to put a guitar amp on the top end.

Matt – That’s the way to do it, well everybody I play with does that, everybody at least has a half stack.

Ade – Helps if you have new strings, you get the harmonics off.

Matt – Ye, and it dirtys it up without a distortion box.

Matt – I like having multiples because the difference between, there is kind of a chunk thing, chunk riffs! There is smooth where you have to hold it real long and you don’t want it to feed back unnecessarily, you want it to feed back smoothly into stuff. So it takes some dialling in.

Matt – Dude! Those things fucking shred if you have a bunch of them and you mic the shit out of them and use them for the PA tone. Then like a Pignose out the back as well.

Ade – Ye, a lot of artists like those because it was meant to be, the original were like our 40th anniversary and we had a plexi glass front on them.

Matt – I would like to get my hands on one of those.

Ade – We ran them for a year and then people started contacting us saying “can you do the OR50 again?” We were getting emails about it every day, so we brought them back.

Matt – I like it because tone wise they are really, really good, they saturate because there aren’t so many tubes to spread out to. It’s just those two to saturation.

Ade – They have a sound, three stage they are, they are three stages of gain. Whereas the Rockerverb is four, Thunderverb is a three.

Matt – The Thunderverbs, the two hundred ones are really good for massive amounts of sound being projected.

Ade – Ye they push! They push the bottom out of the cabinets in a certain way. But they play really firm. Ye I just try and make a good honest amp, with proper transformers. The other thing is there are so many people that say their amp is a hundred percent fully tube and it’s not. Like the effects loop is solid state, some of the distortion is solid state and they are saying its a hundred percent and they are just lying to people. I don’t like that, I keep the solid state stuff, solid state and the tube stuff, tube.

Matt – All tube yeh! Well in my Laney I have Patridge transformers, that shits, fucking, why don’t they make stuff like that any more thats the weird thing, I can tell the difference.

Ade – I think Transtronic have got the drawings for those.

Matt – It’s like that and Mercury does them, I have SLO Soldano’s, Mercurys are pretty good but there is nothing quite like the Partridges.

Ade – Ye we used the Mercurys for a bit in the U.S.A. amps and I liked them, I thought they were really good.

Matt – They are, definitely.

Ade – It actually prompted me because they actually sounded better than what we were using at the time. It prompted me to, I obviously looked at getting coils sent over from Mercury to Europe and then laminating them here. But they wouldn’t do it so I went to the drawing board and redesigned all the transformers, until I was happy with them. So all the fifty Watt transformers and upwards are all eight sections, you know like proper.

Matt – They are good, I mean they perform, they put out.

Ade – No they were great the Partridges, you can get similar made now though.  I mean ours are not a million miles away, I mean they are different design because I went from scratch. I didn’t want to tear anything down and rip it off, its not the way I roll. I went I’m going to make something that sounds similar to this or maybe try and better it. Do my own recipe, make a few different ones up and feel them and play them.

Matt –  Well then it is all a matter of parts, you know little parts, like capacitors and diodes. That’s why I don’t build amps, that’s where I get confused. Dudes like you! Well thank you for making them!

Ade – We still build some hand wired stuff, you know like the Custom Shop stuff, I always have a lot of fun doing those! They are different, they do sound different.

Matt – What is your preference on speakers? Do you mess with stuff?

Matt – Really? Its weird but the low end thing, the smaller you get and the more of them, produces low end.

Ade –  Well I like open back because its not so directional and you can still get a lot of bottom out of them.

Matt – I like open backs, my friend who records my other band High on Fire, Kurt Ballou, he is in that band Converge. Emperor made him a bunch of open backs and I think there just Celestion greenback copys.

Ade – I don’t like  speakers that are less than a hundred dB, I don’t see the point. If you are going to lug a 4X12 you want it to be loud. If it’s 96 dB speakers then it is half as loud as hundred dB speakers. Its the way the human ear hears Decibels, its half as loud. I’ve tried the Fane Alnicos, they are good.

Matt – Alnicos I’ve got to write that down.

Ade – They do a 60 Watt cream coloured Alnico 12″ which is really nice. Its kind of like the Celestion but a little bit softer. But not too soft, do you know what I mean, its a nice balance. The bottom is really good on them.

Matt – If they are a little bit puffy to begin with, thats where your effects come in and how you are driving the amp. I use a lot of mids, its smoother than if I turn all the mids off and its the bottom and top its what everybody like in Metal. I like the Randy Rhodes mid thing, Iron Maiden even used a lot mids.

Ade – Oh you have got to use a lot of mids on guitar.

Matt – If you want your lead to pop out add mid.

Ade – Ye, you don’t want to take it out if you want lead! Its going to sound like a wasp in a jar if you do that!

Matt – I think a lot of people try to add a little bit of treble to it or volume and treble.  It doesn’t make it smooth, more mid smooth.

Ade – Its like the Tiny Terror, doesn’t have any tone controls.

Matt – Oh I love that thing! I have two of those!

Ade – It’s actually a filter on the power amp, so the preamp hasn’t got any tone stack in there at all. That’s why its got the perceived gain of like a three stage, when you crank the gain up. Its actually a two stage because it hasn’t got the tone stack loading it down, you get more through.

Matt – You know on my rig out there, usually I have one of those with me in the States. Usually I have two of them, I didn’t get a chance to bring anything like that over here, you know weight wise and luggage and shit. We usually have one of those Tiny Terrors and a little two speaker deal and then we put in a Marshall head case or one of the big cases and then we just put a 57 in there. I started with a Pignose doing that and then I got endorsed by Orange and I started using that thing and it really rips. That’s what the guy at the board can really do shit with my guitar with that thing, he has a bunch of FX pedals up here, that distort that thing or give it delay or swirl it around the room. That means I don’t have to touch shit, I just have to play!

Ade – That’s cool! That is what you really want to do. Those saturate in the output stage nice because of the way the transformer is, its like a baby fifty Watt five stage but miniaturised.

Matt – That is great!

Ade – That saturates like an old late 60’s fifty Watter would but in fifteen Watt.

Matt – I don’t need it much either because it is in a box, next to a mic, going through the speakers out there. I got that from, it’s an old Frank Zappa trick, he would take a little Pignose and fool everyone, he would just be shredding it!

Matt – I’m not a big solid state dude, that’s not what I do. It’s cool for like practice room.

Ade – We make them for people who can’t afford the tube amps. We try to get them to sound as good as possible without being tube and so that the control panel, if they find themselves on a Rockerverb they’ll know where they are. The controls come in at roughly the same place, so they won’t be lost if they find themselves on a Rockerverb, a Dual Dark or Thunderverb. The gain structure works in the same kind of way.

Matt – Well I’ve been using these for so long, I kind of know all of them! I know what they all do. Thank you for making a solid amp!

Matt – Proud to play them!

Competition: WIN the Ultimate Pedal Board
Scroll to top