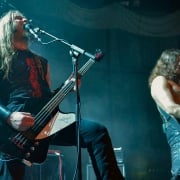 Grutle has been an endorsed artist with Orange amps for nearly four years now and has been using the AD200 and OBC810 around the world with Metal band ‘Enslaved’. When he heard news the Terror Bass was being relaunched he had to have a go.

Grutle: Good afternoon! This is Grutle Kjellson from Norwegian hard rock band ‘Enslaved’ and I want to talk a bit about this little gift I just got from Orange, it’s a reissue of their Terror Bass. It’s a 500 watt model, it’s a very powerful unit that weighs only about I think it’s a little more than 4 1/2 kilos (10/1 pounds). Which is pretty amazing for such a powerful unit.

It’s very simple, there’s on/off, standby, there’s a volume, treble, middle and bass, and gain. There is a clean and pad switch, the clean switch gives a bit more headroom and the pad switch is a active and passive switch. If you turn this switch down like I have, it’s for active basses and takes some input sensitivity off, about 6dB. There’s of course a balanced output, there’s an effects loop, it’s a very nice portable solution.

It’s a little bit difficult if you travel around a lot like we do. Try to get an AD200 amp onboard, it’s totally impossible it weighs a tonne. This is like not much bigger than a lunchbox, at least not for a guy like me, an ogre!

I’ve had this for a couple of months now and i’m really satisfied with it. Our sound guy actually told me that i’m not allowed to use anything else, so i even use this on tours. So let’s take a listen to it. 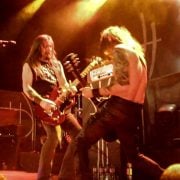 The Voice of Bass
Scroll to top