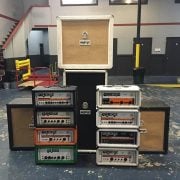 All of us have heard people talk about tone, or read something about certain bands or individuals having fabulous tone, or seen an advertisement stating that this amp or that pedal is exactly what you’ve been looking for and will help sculpt or define your tone. It’s no secret that guitarists are constantly on the quest for tone, but what the hell do we mean in real terms when we’re talking about ‘tone’ and do we really know what it is we’re actually looking for?

The English dictionary defines tone as ‘a musical or vocal sound with reference to its pitch, quality, and strength’ but I’m pretty sure none of those words get used that much when we’re talking about tone. Like everything else about playing guitar, ‘tone’ is a purely subjective matter and what sounds like a choir of heavenly angels to one person will no doubt sound like a bag of hammers being thrown down the stairs to someone else (don’t get me wrong that might be the sound you’re after but you get my meaning). Probably the biggest problem encountered by anyone searching for ‘their sound’ is that, given the subjective nature of what we seek, when it comes to describing tone we all use different words, facial expressions, body language etc. to say exactly the same thing.

To give you an idea of what we’re talking about we’ve borrowed a few ‘tone-isms’ (not quite sure on the legitimacy of this as a word) from our very own Orange Amps forum. Here’s a quick sample of words that have been used; your guess is as good as ours as to what they’re actually describing…Round, Swampy, Muddy, Woody, Chewy, Flabby, Brutal, Clunky…as you’ve probably guessed the list is endless. To be fair they’re all very descriptive and onomatopoeic (i.e. they phonetically imitate, resemble or suggest the sound that they describe) but do they actually describe tone?

When I’m asked to talk about tone and just what it is I’m looking for i.e. the ‘sound in my head’ (that would make a great slogan for an amp company!), I try to use words that are simple to understand which hopefully means that whoever I’m talking to is able to get a good idea of what the hell I’m on about. That said though, I’ll often shy away from having to do it or say as little as possible because I don’t think I’m able to put into words what my ideal tone is. Like every guitar player I know what sounds right to my ears and get that funny feeling in my bones anytime I hear it (you know the one I mean)…it’s a very personal thing but we all understand it.

Another dilemma is that our Holy Grail of tone can, and probably will, change over time (or like my best mate every other flippin’ day). When I first started playing guitar I was intent on recreating the indie sound of Brit-Pop bands. As my musical horizons shifted I longed to obtain a bone crushing metal sound and now in the prime of life I’m addicted to anything dubbed to be classic rock or bluesy. So is the quest for tone something that can be accomplished or is it some kind of impossible dream that like the pot of gold at the end of the rainbow is something that we’ll just never get our hands on?

A lot depends on the type of individual that you are. Are you one of those people that is happy with what they’ve got even though it’s not quite right or what you wanted? Or will something like this nag away at you slowly until you can’t take anymore? The resources that are available to you will also have a big impact; we can’t all afford to change our amps every time we feel like it or buy a new pedal just because it may hold the key. Also bear in mind your influences and artists who inspire you. For example, Joe Bonamassa is always changing his backline…so does that mean he hasn’t found his ‘tone’ yet or that he just fancied something different on any given night or tour? Slash on the other hand has been using a wall of Marshall’s since time began.

So…the quest for tone. Is it something that should inspire us, or something that will slowly but surely drive us crazy? I like to think it’s a little bit of both. We should always look to stretch and improve our musical abilities and equipment…after all that’s half the fun and we’ll always spend a fortune, make our loved ones suffer or travel great distances in order to complete our quest but it shouldn’t mean everything. The gift of playing and the appreciation of music are the true prizes and we should never take either of them lightly or lose sight of that fact ever but at the same time the sound coming out of those speakers should still send a quiver down your back so what’s the harm in looking? Happy hunting!