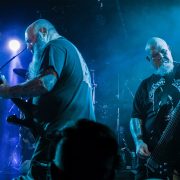 Kirk: Hey i’m Kirk Windstein from the band Crowbar out of New Orleans.

I started using the Crush 120’s, I ran into Alex at a show in Atlanta and we kind of reconnected again. Because when I left “Down” I had always used Randall solid state with Crowbar from the 80’s, Dimebag turned me on to them when Phil Anselmo joined Pantera in 87′, I used them ever since with Crowbar.

When I sent him the email saying i was leaving “Down” and I wasn’t going to be using Orange but thank you for everything and I still love the product.

He goes: “We make a solid state amp now, how about I send you one?”

So I’m like I can’t wait to get this thing to the rehearsal room, so I got it there and within two or three minutes I was like this is definitely what I’m looking for.

The thing is, up and till, when Dime turned me on to the Randall was right around the time we started to drop tuning, about 1988 Crowbar were tuning to B standard or drop A, way before the seven string came into popularity. I couldn’t get a good tone out of any tube amp but the Randall solid state got the bottom end was so much tighter and wasn’t so broken up, so I was sold on the solid state thing. When I tried the Orange Crush 120 I was blown away by how much even with our tuning it sounds like a tube amp, its got warmth that a normal solid state amp doesn’t have, it’s a better version of what I have been looking for.

I’m very old school, I don’t use an effects loop or anything, I actually just use of course a tuner. I use, I know they suck, everybody always asks me why I use it, I use a metal zone but I use it as a clean boost. So my level is on ten, my overdrive is on zero, so I’m getting no saturation from it, the EQ is at 12 o’clock. So the pedal, I’m not really using any EQ or gain, it just kind of gives it a little clean boost, it tightens it up. As far as my settings, i’m still working them out, I have my bass on eight, my treble on about four and a half and my mids on about four. It’s still a work in progress!

For me using the Orange 4X12’s its the wood, the Baltic birch, the rear mounted vintage Celestion 30’s which is pretty much the only speaker I like to use. It’s the same idea as the Marshall and Boogie and everything else, I just think it is a better made cabinet. Even our sound guy in States was saying when we were talking about the Orange cabinets:

“Man, I should have never fucking got rid of mine, it’s like the best sounding cabinet!”

To me it just is, when you pick the cabinet up, you can just tell, it’s just fucking heavy, not just sounding no pun intended! But its just a lot heavier duty, the handles are metal, everything isn’t plastic and trying to cut corners. Its just a very well made product and that shows in the tone you get out of it.

Thou Shalt Not…
Scroll to top