THE ROCKERVERB SERIES: A RETROSPECTIVE

Every once in a while something comes along that shakes things up a bit.  Its arrival might not have earth-shattering consequences but it’s definitely a game changer…and most definitely something that should be taken notice of.   The release of the Rockerverb series in 2004 was such an event, but looking back now, who would’ve ever have imagined that when Orange launched the series that they would be creating a modern classic.  Orange Amplification has a colourful history (of ups and downs) that spans back as far the 1960’s and the brand, as well as the products that it makes is held in high regard by many.  But 12 years on from its first release the Rockerverb series (now in its third incarnation) has managed to capture the imagination of more guitar players (whether they be pros rocking huge stadiums or bedroom rock stars dreaming of making it big) more than any other Orange amp.

Probably most famously associated with Jim Root of Slipknot (and Stone Sour) fame, the series has gone from strength to strength with each re-working…and is showing no signs of slowing down.  As well as Jim, the list of those happy to be ambassadors for the series includes Andreas Kisser (Sepultura), Tim Sult (Clutch), Frank Iero (My Chemical Romance), Sam Bowden (Neck Deep) and Mikey Demus (Skindred) to name just a few.  The Rockerverb has proved such a hit with Root that in 2012 his appreciation for the amp spawned Orange’s very first signature amp…the Jim Root Terror.  Dressed in black and emblazoned with Jim’s trademark ‘#4’ the amp is a 15 watt single channel monster based on the dirty channel of Jim’s very own Rockerverb MkI.

Jim Root with his signature amp and matching cab… 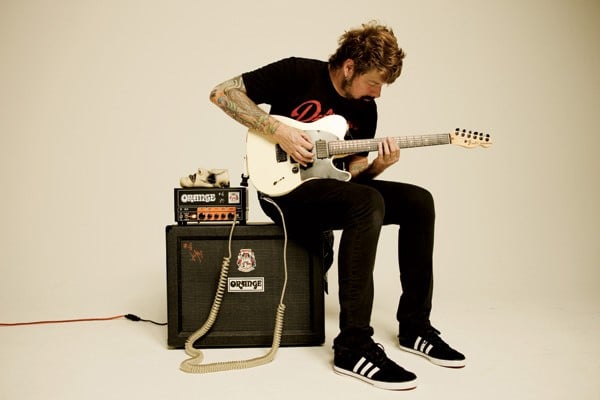 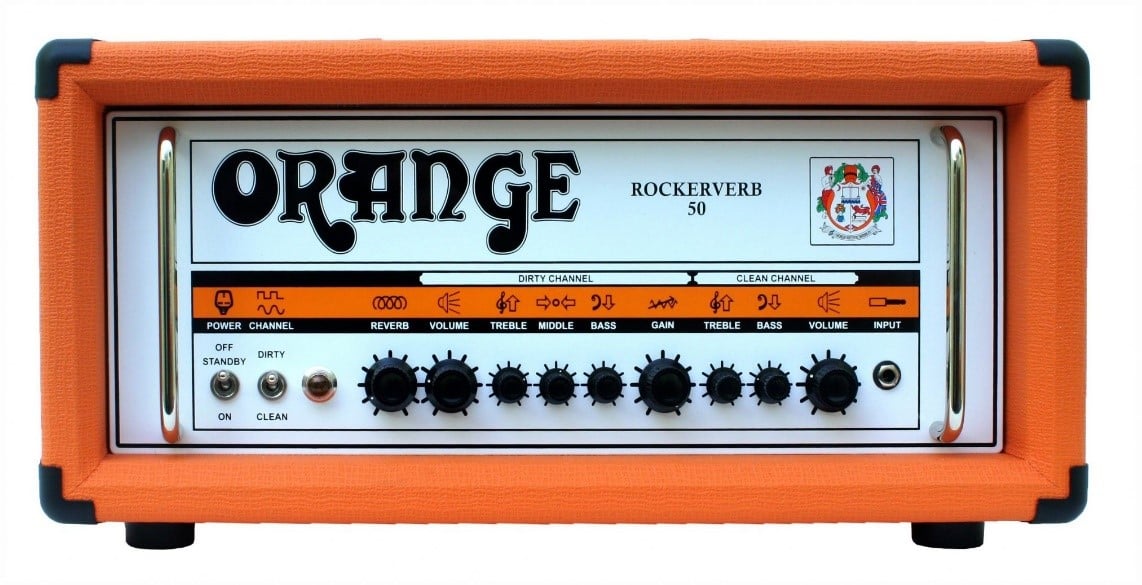 Launched over a decade ago (doesn’t time fly!) the Rockerverb series was designed to be a workhorse amp that would provide awesome tone night after night after night…but also be able to take the knocks it would inevitably get whilst being out on the road.  It was Orange’s first ever ‘high gain’ amp and quickly became a favourite with those that have, shall we say ‘heavier’ tastes, but it was by no means a one trick pony…and that, without a doubt is the secret of its success.  Prior to the Rockerverb series Orange amps had been renowned for their own distinct sound (nothing wrong with that we here you say) but it was a sound that was a bit like Marmite (look it up)…there was no middle ground; you either got it (which lots did!) or you didn’t!  With the release of the Rockerverb series Orange was looking to do things slightly differently this time around and create a whole different type of amp to ‘normal’…and so it was that the MkI set out Orange’s stall for their ‘vintage meets modern’ expansion of their product line.   Championed by the likes of the aforementioned Jim Root, Fall Out Boy, Evanescence and Mastodon (the list goes on), the MkI quickly established itself as a thoroughbred rock machine. 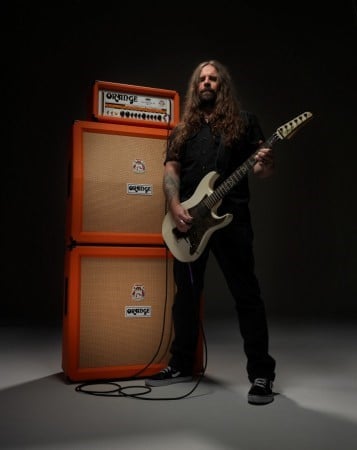 Featuring a quartet of 6v6 output valves with a new and exclusive output transformer dubbed the ‘V8’, the series’ focal point was to provide uncompromising tone.  The two stage clean channel was one of the smoothest and cleanest ever produced, with a unique power overdrive when pushed to the max.  Its interactive treble and bass controls allowing for a wide range of tones from only 3 control knobs.  The second or ‘dirty’ channel featured four stages of gain which allowed it to go from articulate clean chime to classic rhythm / crunch to simply, well…outrageous. 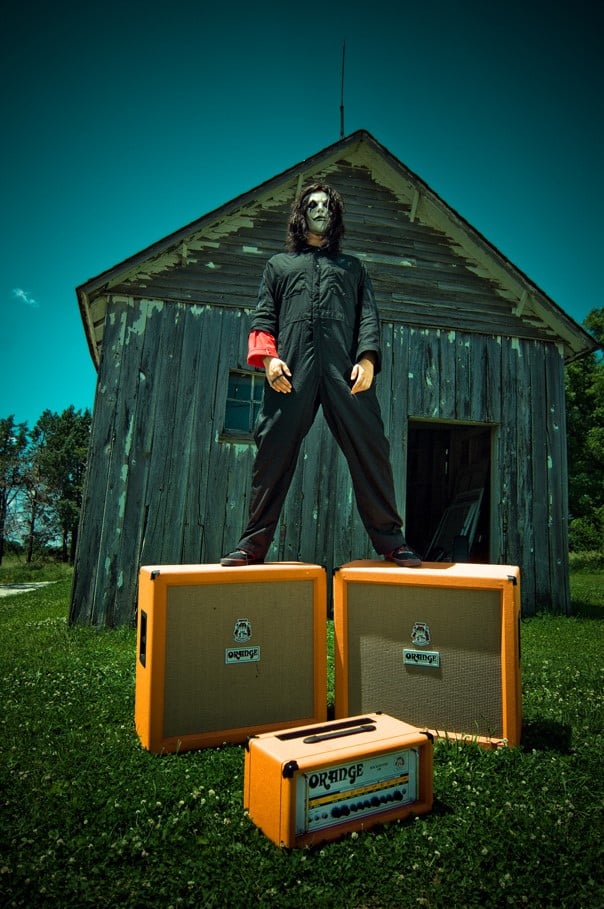 The 100 watt model in the series featured the same pre-amp channels, pre-amp and FX loop as its smaller relation but maintained Orange’s original 100 watt output stage.  Two additions to the output stage were the output valve fusing system and a special bias switch which allowed quartets of different output valves to be used (6CA7 / EL34 / 6L6 / 5881 / KT88).

Overall the amps in the Rockerverb series cost more to produce than any other Orange had previously produced but the sound that emanated from these amps was deemed to be worth every last penny and gave ‘high-end’ valve amps of the time a serious run for their money. 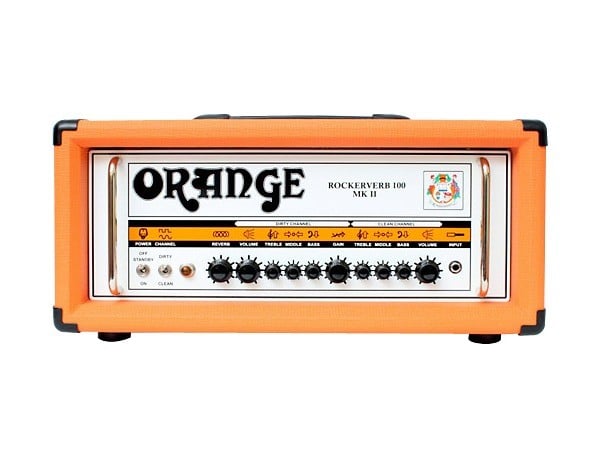 Orange’s initial inspiration for the MkII version of the series was a desire to streamline the types of tubes used in their amps.  The 50 watt MkI was the only amp that Orange had ever produced that used 6V6 tubes and they wanted to switch to EL34’s.  That said Orange also wanted to increase upon the success of the MkI and so taking on board the feedback they’d received about the MkI they set about re-working the series into something even more mind-blowing.  The trick would be to maintain the MkI’s epic tone but improve the amps overall functionality.

Following a lot of head scratching and countless late evenings, 2010 saw the release of the MkII version.

The most noticeable difference was the aforementioned change in power valves.  But although the 50 watt model now came fitted with EL34’s as standard, these could be switched out for 6L6’s, KT88’s or 6550’s if the user wanted to. 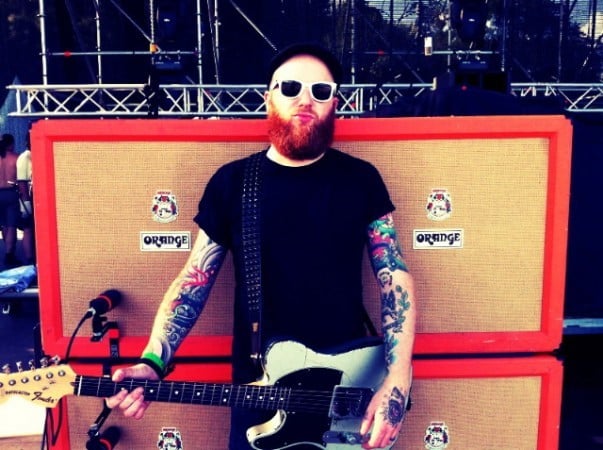 The general characteristics of the clean and dirty channels remained pretty much un-altered; each retaining the same number of gain stages as the MkI.  However, the clean channel did gain an extra control and was now home to a Mid EQ knob for even greater tone shaping but it still had that non-master channel vintage Orange amp vibe that would provide classic British crunch when cranked.   And the dirty channel was still a playground for those looking for tones for everything from the blues to metal…you could even find some country twang in there too!

The MkII’s FX loop was even more transparent than its predecessor’s and featured a 12AT7 tube.  The reverb was made bigger and more usable with an ECC83 preamp valve so it wasn’t as ‘spacey’ as the MKI.

The MkII also featured the option of having one of Orange’s DIVO units installed doing away with the need for manual bias current matching of output valves and the need to purchase ‘matched pairs’.  The DIVO optimised valve performance by constantly monitoring the circuit, automatically detecting any faults and if necessary removing a valve from the circuit.

The MkII was also the first issue of the Rockerverb series to be available in Orange’s alternative black basket weave vinyl and for a brief period in 2014 was available in a limited edition white vinyl with gold piping. 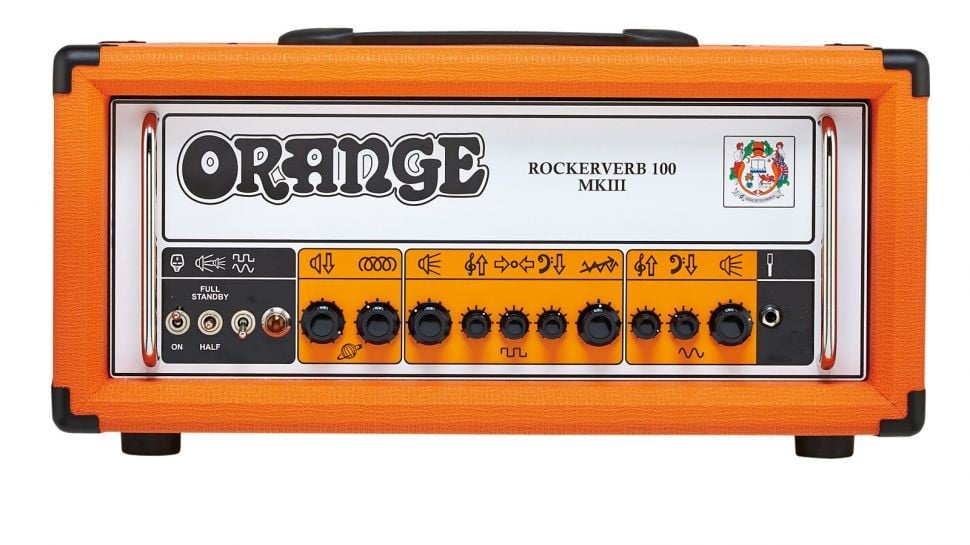 2014 saw the Rockerverb series celebrate its 10th anniversary and with the MkII practically garnering legendary status the question of how to make something already so good even better was in Orange’s mind.  After over a decade of tinkering and refining, they revealed the answer to this conundrum in 2015 at Musikmesse in Frankfurt, Germany…and it was without doubt the most feature-laden amp to bear the series name ever.  If the MkI and MkII versions had set the bar (and set it very, very high!!!) then the MkIII was about to take the bar and launch it into orbit.

Voiced a little brighter overall, the MkIII is able to cover anything from British crunch through to the heaviest of today’s metal tones whilst still retaining the clarity of tone that the series is renowned for.

The clean channel has been re-voiced to have an even more ‘chimey’ response and the headroom increased whilst still allowing the channel to retain its warmth and vintage vibe.  Oh and remember that additional Mid EQ knob that was added to the MkII? Well that’s been ditched.  The thinking behind this…it’s just not necessary since the series’ midrange is what makes it Orange.

The MkIII’s reverb is even more ‘usable’ than the MkII’s.  It’s been given a brighter trail and is the richest sounding to date with a more intuitive sweep ranging from subtle ‘air’ to full on surf.

New to the range is the ability to select output power; the 50 watt model features a ‘half power’ mode reducing the output power to 25 Watts.  Whereas its bigger brother (the 100 Watt model) features options for 70, 50 or 30 Watts output.  The mains transformers have also been re-worked to improve low end response and articulation.

…‘In an amp category full of one-trick ponies, the Rockerverb MKIII stands as a versatile jack-of-all-trades’…

Also included for the first time in the series is a foot-switchable attenuator (borrowed from its cousins the Thunderverb and Dual Dark series) which allows users to have all the saturation they could possibly ever want from a fully driven tube amp but still be able to have a chat and not annoy the neighbours with silly volume levels.

The changes aren’t just internal either!  The cosmetics of the series has been given an overhaul; gone are the labels of the MkI and MkII faceplates and in have come Orange’s fabled glyphs for a totally  ‘pics only’ front panel.  The MkIII also features de-tinted control knobs.

…’the Rockerverb MkIII is a hell of an amp and

As a side note…the MkIII has proved so enthralling that even Mr Root has finally made the switch from his beloved MkI and is now rocking stages around the world with the latest Rockerverb.

Frank Iero of My Chemical Romance… 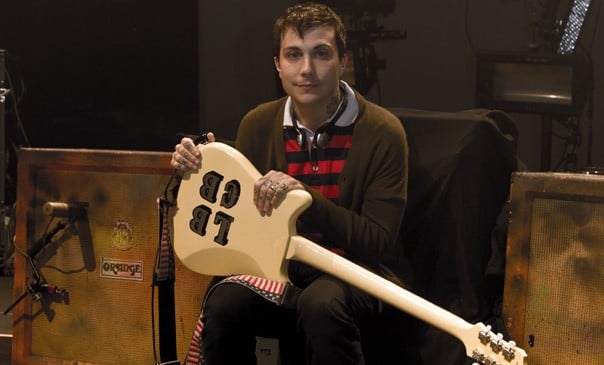 As to the future of the Rockerverb series…who knows?  Clearly the series is a firm favourite with many guitarists (just look at who uses ‘em!) but having already improved on greatness twice its hard to imagine Orange being able to take things any further.  But then again they’re Orange and making things the best they can be is what they do best, so we’ll just have to wait and see…MkIV anyone?