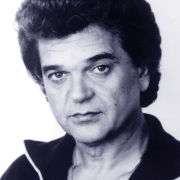 Question: What if Ghostbusters was like, still about blasting ghosts, but instead of using proton packs they used Orange amps strapped to their backs and the guns were guitars?

I’ve been thinking about this a lot lately. The Ghostbusters are some of my favorite people. They’re all laid back and cool, but at the end of the day they’re action stars, superstars even. They saved the f*cking world. They’re pretty ugly guys but that’s what makes them endearing. I mean, look at country music icon Conway Twitty:

Conway Twitty came from a time when you could be ugly as sin but still be a music superstar. We called it the 70’s. That dude was beating off women with a stick.

The Ghostbusters have proton packs which, according to the definition I found in my sock drawer, have “the power of 1,000 suns harnessed into a backpack that could potentially malfunction causing the end of the universe as we know it.” That’s a whole lot of power for these men to wield.

In fact, we should fear the Ghostbusters. They’re basically gods. Which is why I don’t understand how a guy like Martin Peck, representing a governmental organization like the EPA, would think it’s even in his wheelhouse to try and tell these guys what to do. Put them on their pedestal and give them their gold medal because nobody is worthy of their greatness.

And so that’s why I think they’re basically the same as Matt Pike.

The Ghostbusters have technology capable of tearing holes in the space-time continuum. Matt Pike has a wall of Orange amps. That’s pretty much the same thing. Also, the Ghostbusters shoot beams of energy (music) at ghosts (their audience). Then they capture the ghosts (the audience’s attention) and transport them to an otherworldly holding chamber which is essentially purgatory (the merch line).

It doesn’t? You’re upset you even started reading this opinion piece? Fine, no worries. The whole point of this was to show a picture of a Ghostbuster with an Orange cab strapped to his back.