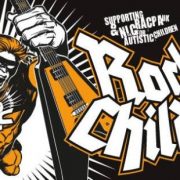 As the dust settles on the 7th NLC Festival it is time to look back and try and remember what actually happened, every year gets bigger, more insane, more fun and it takes things further than I could have ever imagined back in 2011.

Arriving at the venue Saturday morning knowing myself and Kieran (Son and Stage Manager) had the full back line to set up and stage to dress in under 2 hours certainly filled me with dread, I’m not getting any younger you know, oh and Orange Amps are so well made (read, heavy LOL). We had decided this year to make the stage huge so not only did we have 3 Cabs and 3 Heads for guitars we also added dummy cabs plus a 8 x10 bass cab and head, it looked awesome with our Bright Orange drums sat neatly in between, we knew that bands would love it. Set up and first Band sound checked in plenty of time, first mission of the weekend accomplished.

Saturday we had 11 bands lined up including our after show party Band The NLC All Stars who had the one rehearsal booked for during that day, at least they did one this year.. It would take too much to go into every bands set so let’s just say each and every one were on fire delivering set after set of awesome Rock n Roll that kept a packed Sold Out venue Dancing and Rocking for 9+ hours solid, thank God the Venue had fitted Air Con this year, it was needed. It was a day when smiles and laughter filled the Venue, when the crowd mixed with bands and met old friends. Many Bands came for the whole weekend which is amazing and became part of the whole event. Saturday finished with a huge party and a little late but hey we won’t talk about that, It was home with aching limbs and the thought of 6 hours sleep before we had to go again.

Sunday is Party Day at NLC fest, a day when everyone knows things are going to get louder, faster, hotter and just a damn fun day, with 11 bands once again ready to give 150% we were off on time and a packed room at 1pm, the room never went quiet all day or evening and again the bands were Electric, creating an atmosphere that I had never seen before at the past events, there was something very very special in the air that I wish I could bottle and sell. There was a lot of emotion around, good emotions as we knew something good was happening and that records for our fundraising were going to be made, oh and The Venue Bar takings that is another story.

As the final band The Main Grains played their set it was time to gather flight cases ready to dismantle what had been an outstanding back line, with more bands using the Orange Rock Verbs than ever before, it had certainly delivered on all fronts and made a lot of new fans. Stood looking at those cases it was like being at a Major gig at a huge venue, a pretty proud moment. 30 minutes and the stage was clear, the supporters were in the Bar and 2017 had been brought to an amazing close.

This Festival is run to raise awareness and funds for Child Abuse and Autistic Children via our very own project NLC for Autistic Children and Rock Against Child Pornography and Abuse UK, every band that plays does so freely and give up their travel costs to be with us, these guys are the Rock that builds this platform so we can do what we do each year along with our supporters who come back to party each year.

We knew that funding records would fall but by how much I could never have dreamed, the total that was raised was a huge £6000 which smashed the previous year by two grand. This will now go to help Abused Children and the fight against child abuse and also to help Autistic children have a better education via I Pads etc and to also help them be able to enjoy life as equals in a safe environment.

A huge thank you must go to Neil at Orange Amplifiers for believing in what we do and letting us put the Orange name out there and also to Richard at STS Touring for their brilliant service with delivery and collection of the back line.

Thanks to Steve Russ for the videos.