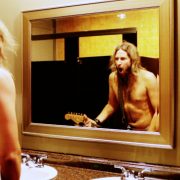 Troy Sanders of the explosive, unbridled force that is Mastodon was as sick as a dog when he found out that all six of his amps had failed just before a gig. Orange Amplification’s Micro Terror was rushed to him by wonder dog ‘Bear,’ who ran mile after mile across all terrains to deliver the amp and save the show! This is not a shaggy dog story, check it out at http://youtu.be/tTkv7NR-EbE.

The Micro Terror is Orange Amplifications smallest, most portable Terror amp yet, delivering a classic Orange sound way bigger than it looks and more than capable of giving enough stage volume to satisfy the mighty Mastodon.

Orange Amps – a breed of their own, be careful how you use them.

A special thanks to Newmerica (http://newmerica.tv), the creative video agency that collaborated with us to produce this video. Music by The N.E.C. and Rump Posse.