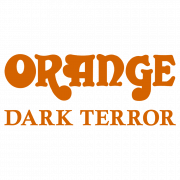 The first high gain amp in the Terror series, the Dark Terror is a true master of saturated distortion, making it an ideal match for Hard Rock players looking for signature Orange ‘chug’ in a portable package. Featuring the same 15/7 Watt output section as the Tiny Terror, plus the addition of our  low impedance, valve buffered effects loop, the key to the amp its high gain preamp section and our exclusive Shape control.

The Shape, which first appeared on our now discontinued Thunderverb Series, takes your sound from scooped, chunky modern rhythm tones in the fully clockwise position, to a more classic voicing (anticlockwise) with boosted mids and smooth highs, and everywhere in-between. This makes the amp much more versatile than its single channel, three knob layout (and black chassis!) might suggest. The preamp features four stages of gain, becoming increasingly aggressive as you turn the Gain control, reaching truly insane levels of drive. Ignore the clean and crunch tones at your peril, though. There are some tasty Blues tones to be had here!

We listened and took feedback on the Tiny Terror to deliver something different. More headroom and more varied tones.

Allows you to change the shape of your tone – move your guitar tone around the EQ spectrum with just one control.

A 4 stage Tiny Terror with a tube [valve] effects loop. Similar to the lead channel on the TH30 but the shape has been re-voiced so you get more chime.

This amp is the perfect high-gain partner for recording and medium-sized gigs.

The Dark Terror does its job brilliantly – and that job is to kick hairy arse.