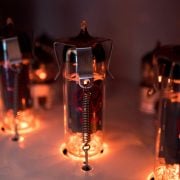 Like sediment, rock music has been compounded by time. Layers of innovation and genius have terraformed our culture, leading to two unique sounds that lay either side of the Atlantic Ocean. We are of course talking about the American and British sounds of rock.

The origins of guitar amplifier tone

Delta Blues, a contemporary to the folk music of plantations in the southernmost states of America carried with it the soul of African American sentiment; there it stayed until mid-1930s. Its transience, owing to the affordability of tabletop radios powered by pioneering 6v6 valve technology spread the sound of the blues up the Mississippi; eventually evolving into electrified Chicago blues.

Electric amplifiers carved a new sound into the bedrock of the music industry. Inside, those same 6v6 valves, once providing comfort to wartime widows awaiting the return of their loved ones, became synonymous as the sound of American rock and roll. Open and glassy; unforgiving as they are transparent, 6V6 tubes provided an almost cheery optimism for an economy recovering from the brink of collapse.

In part, the American sound maintained its roots in the country styles from which has been a staple of the pop music since the ‘20s. It’s ideally suited to articulate picked or plucked notes, highlighted with a bold, solid voicing and bright top end. Just like audio production methods still used today, the American sound is tight and precise.

But on the other side of the pond, an alternate path was being drawn. Manufacturers adopted a higher-powered newcomer known as the EL34 that soon became a staple for use in British guitar amplifier design.

The EL34 reflected the gritty realism of post-war Europe, a dark time that was played out through the music, with guitarists expressively pushing their amps to the edge. The EL34 valve was perfect for the role; its scooped mids, gave a nastier, forward and downright aggressive tone without necessarily distorting the signal.

A bullish, British sound that gave Hendrix the headroom to expend blistering performances, driving home a wall of sound from his favoured Marshall Plexi Amps right up to his 1969 performance at Woodstock. From that point onwards players were looking for something extra to make their mark, and they found that in Orange Amplifiers.

The timeless sound of a nation

Fleetwood Mac, one of Orange Amplifier’s first endorsees took the first Orange rig on a three-month tour of America in the winter of 1969, and although the true voicing of the EL34 valves had yet to be realised. Neither the less, a monster wall of tone pummelled through six 100-watt amps (two with standalone spring reverb units) and 16 speaker cabinets (a mix of rectangular 4x12s and 2x12s), making the world take note.

By the 1970s, the first true Orange Amp, the GRO100 Graphic Overdrive amp came to be, with those classic EL34 tubes being ground into by the front-end input. That thick mid-range compression breaking up in a raw, unadulterated way voiced the British sound of many classic rock albums of that era.

By the 1980s music had evolved from those heady days of psychedelic hippy rock and valve amps fell out of favour, eventually being replaced in guitar music with solid-state amplification.

A reprisal of THAT sound

In the mid-90s that signature Orange Amplifier sound broke new boundaries as Oasis conquered the record industry worldwide, of which Noel Gallagher used Orange OR series amplifiers to record his first two albums. An example of that classic tone can be heard on Some Might Say featured on their 1995 release, ‘What’s the Story) Morning Glory.

Times have moved on since the early OR series amplifiers with the modern equivalent, the Orange OR15 features EL84 power tubes. EL84s give that same British roar but with less headroom, allowing the amp to break up faster. They don’t blow your head off in smaller spaces, but still retain that classic grit tone.

Fans of all things tube require more raw power than the OR15. The AD30 is a 30-watt Class A amplifier that offers more flexibility to tonal flavours than a gelato ice cream seller on Brighton Pier.

Along with that vintage British power amp distortion, a second channel offers a creamy, classic voice; a Swiss Army knife of amplifiers, like the bastard son of the Vox AC-30 but with that earth-shaking Orange tone. A lovechild embraced by Jimmy Page of which can be heard on the 1999 record, Jimmy Page and The Black Crows ‘Live at the Greek’.

We will accept no compromise

Since 2004 the British tone has received a pumped-up steroid-fuelled monster called the Rockerverb, genetically modified to satisfy the tastes of touring musicians that want to fully manipulate headroom, volume and the wrangle with the beast within. Today’s Rockerverb 50 MKiii disregards the protest movements of the old guard, instead choosing direct action with chimey cleans and iconic gain tones that goes from classic British crunch through to the darkest, heaviest modern genres.

If you want a great example of the Rockerverb 50 MKiii in action listen to Mothership’s 2017 release ‘High Strangeness’:

There’s no denying that the two sounds, British or American are distinct. So much so that when it came to producing all-analogue solid-state amplifiers that personality had to shine through.

The Crush Pro series is the epitome of that transition. The analogue signal path allows for those rich tonal characteristics, the hallmark British sound combined with the ruggedness of a solid-state amp. Two channels, one is a classic vintage-inspired design with sparkle at the top end, but as you push it a bluesy crunch oozes from within. Channel two matches closely to the Rockerverb’s high gain aggression. Flying the British flag of inclusivity, yet tipping the hat to those across the pond.

Rock music has always been about pushing the limits, from its roots through to the complexity of modern-day performances featuring an array of tonal weaponry laid at the feet of giants. And that British sound, still as prominent as ever, lives on because British amplifiers give that something extra.

And like many great mix engineers will tell you:  ‘It’s better to cut from a sound than it is to add to it’. 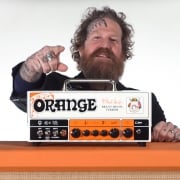