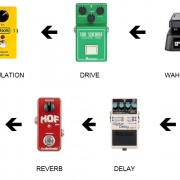 Previous blog articles have briefly looked at the types of effects that are available to modern guitarists, what you need to be thinking about when taking your first steps into the world of pedalboards, and the enigma that is the effects loop.

With those previous editions in mind, this article looks at arranging your selection of effects in order to optimise their performance and get them doing what you want them to. The way in which your effects are arranged has a massive impact on your overall sound. This is because they will all react differently depending on where they are placed in the chain due to the signal that is fed into them (i.e. pure guitar signal or signal from another effect).

Deciding upon your setup is a big decision…so how do you know which way is right and which is wrong? Well as you’ve probably come to expect by now (as with everything else when it comes to your setup) there is no right way or wrong way to chain your pedals together…it’s simply all about finding out what’s best for you!

This arrangement means that the raw signal (i.e. from your guitar) is straightened out and refined first, before being distorted and boosted and then made to wobble. Next echo is added to the modified signal and finally it is reverberated.

This follows the order above and is a good place to start if you’re trying to get to grips with arranging your effects. This is considered to be the classic setup.

This is a common variation on the standard setup. Here the wah-wah and the modulation pedal are swapped around. This arrangement will make the wah-wah stand out a lot more. When using older (more often than not analogue) modulation pedals it can be worth experimenting and placing them before your drive pedals, as sometimes they can sound a bit mushy when placed after.

If your amp has an effects loop it’s always worthwhile trying your delays and reverbs in it (modulation pedals are often placed in effects loops too). This setup will usually mean that your delay and reverb will sound more prominent. It will also simplify the signal going into the front of your amp.

Compressors should always be placed at the start of your chain, as their job is to even out the dynamics of the signal. Putting them later in the chain will only amplify any noise built up before them. You could also try this arrangement with a wah-wah positioned between the compressor and modulation pedal.

So there you go…as easy as that. If after reading this you’re sat there thinking it all looks and sounds very complicated (although it can be if you want it to be) don’t be put off as in reality it’s very simple…you get a pedal and plug it in, then you add another to it, then you swap them around and then add others and change the order until you find the sound that you’re after. Some decisions will be made for you (e.g. if your amp doesn’t have an effects loop you’ll have no choice but to put everything into the front of your amp) but for the most part it’ll be down to your personal preferences. Remember when it comes to effects experimentation is the key so get your hands on some and get stuck in!

Orange Are People Too: Rohan
Scroll to top