As a guitar player with endless possibilities for a rig and obsessing over the smallest details, it’s possible that maybe the biggest pieces of the puzzle can get missed. For a second, let’s step away from your cabinet, pedals, cables, even picks—and focus on the most important piece aside from your amplifier: your guitar. No brainer, right? Maybe, but also possibly overlooked. Of course there are numerous rabbit holes you could wander down on this discussion, however, let’s explore beyond tone woods and pickups and zero-in on another interesting topic: solid vs. semi-hollow body guitars.

Solid bodies guitars are thought to increase sustain and be the perfect complement for rock, metal and punk players. Purist Les Paul followers will insist that the best Les Paul, is the heaviest Les Paul. Modern players don’t want any of those swiss-cheese, hollowed out bodies nor do we want our grandfather’s acoustic guitar. We want to plug in a loud, mean, sunburst Les Paul and crank it! Growing up with a picture of Jimmy Page on the wall was an iconic symbol of rock history that rooted a lot of us in our current tastes. Of course, in his hands you’ll find a Les Paul shadowed by a still-in-production Orange AD Series in the background. 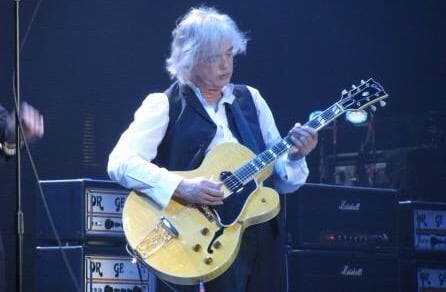 Holding this revered image in mind, once upon a time I insisted on a heavier guitar. I didn’t want a Les Paul with holes in it or half the body hollowed out and missing; that’s not a real guitar, I thought. Where’s the sustain going to be if the manufacture removed pounds off the instrument? Will it still sound good? My concerns weren’t limited to just a Les Paul, it didn’t matter if it was semi-hollow or even a hollow body–it didn’t entice me. Looking at telecasters over the years and seeing the open f-hole on one side of the guitar peaked zero interest for me. Sure, it looked nice (and we know guitar players can be a bit superficial) but I looked upon those guitars as something for the faint of heart not for someone that wanted to dime it.

Then there’s the semi-hollow crowd. Like most, I thought this group of 6-stringers was too laid back, only for country pickers or jazz guitarists. Despite this fact, as a young boy I was floored watching Chuck Berry hop on one foot with a cherry red ES-335. Chuck was a pioneer of rock and roll and brought a new sound to the masses even before Jimmy did. Other than seeing Chuck mesmerizingly play an ES-335, I didn’t appreciate how it could work for me. I am certainly no Chuck Berry and felt only he could get away with it. In recent years, we have seen new artists come up through the ranks and increase the use of semi-hollow body guitars. Dave Grohl of the Foo Fighters has recently re-popularized an ES-335 signature model based upon an older version used by jazz guitarist Trini Lopez in the 1960s and ’70s. Now I get it. Dave is someone anyone would consider a rocker and if an ES-335 is good enough for him it certainly is for me.

So which is right? Is there even a wrong answer? Is the real question–do I want to sound like Jimmy Page or Dave Grohl? Like most guitar player related Q&A, neither is wrong but, then again, neither is right.

Wandering down the avenues in which you intend to use the instrument and factoring in other variables such as tone woods and electronics adds an additional layer of complexity. Without focusing on all the bells and whistles, what we can be sure of with our guitars is the overall feel by holding the guitar and the perceived sound that is heard. If the amp you are using masks the tone of your guitar, what would it matter what you’re playing? What is it that you’re really hearing—the amp or the guitar? Plugging into an Orange OR100, is a very honest and liberating experience. There is no need for a pedal board—maybe a tuner between you and the amplifier—but that is it. A very organic sound is generated from the amp and allows your guitar to shine while keeping that classic Orange tone intact. 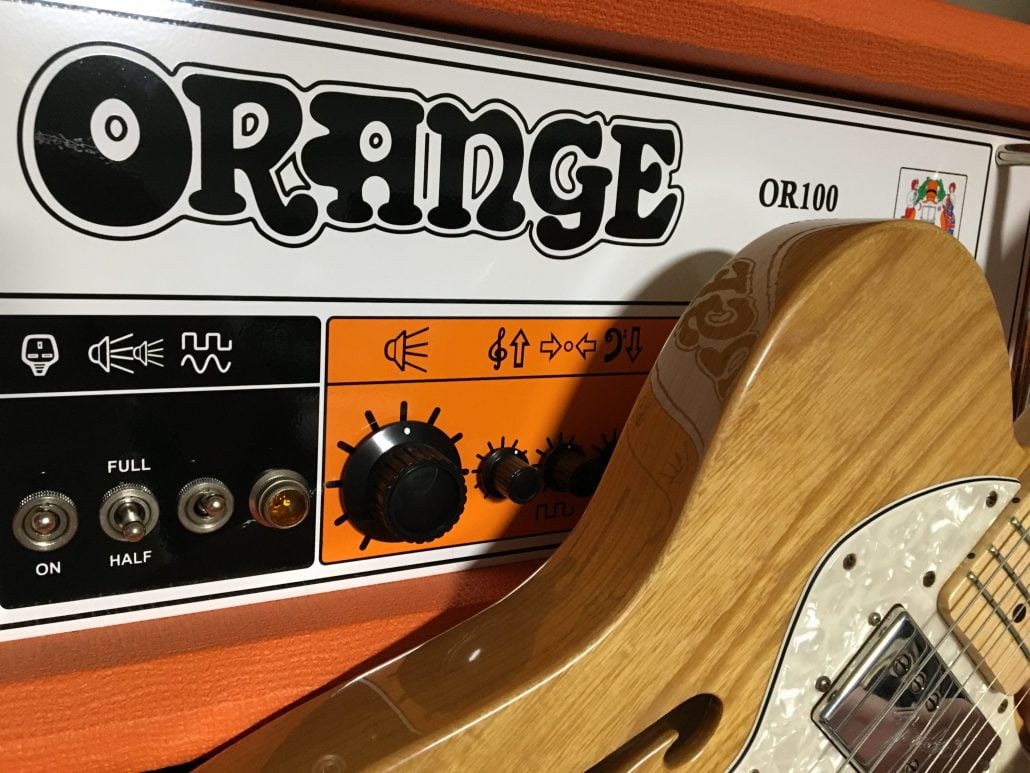 The major differences found between the two body types, like a Les Paul versus an ES-335 is two-fold. First, an LP sounds very familiar a la Page and second, there is just something about that striking tone–a steady, unforgiving power. Is it the model or simply a 9+ pound solid wood guitar singing? On the other hand the ES-335 is going to bring a classic Gibson attitude replete with some air in the sound and a little more space to breathe along with some playful feedback. Whether you want feedback or not it will occur regardless of guitar choice if you stand in front of the speakers or have gain engaged. Your guitars will squeal. There can be a great deal of screaming feedback with a semi-hollow or P90 equipped guitar, if you allow it and don’t choke your volume knob on the guitar during breaks.

After years of bliss (or ignorance depending on how you view where I am now standing), I decided to be bold and try my first semi-hollow body guitar. It felt good. It sounded resonant unplugged but now intrigued I was not content. I grabbed a cable, plugged into my trusty AD30 and a 212OB, struck a C# chord and immediately fell in love with music all over again. As I played random riffs I could recall asking myself many questions. What was this sound? Was it the amplifier? The cabinet? The guitar? Did I all of the sudden become a better player? In short, it was all of it–trembling together in beautiful harmony. The ethereal yet strong tone from this semi-hollow into the AD30s wonderful saggy Orange tone brought a smile to my face.

Thinking that maybe I just struck gold, I needed to further explore this little slice of heaven. It was time to start burning some EL34s in my Rockerverb. The result? The same stupid grin of discovery for a player who has found a home in a lesser-known realm of guitar tone. I have not seen many plug an ES-335 into an Orange, but just let me say: those who don’t are missing something special. I couldn’t help thinking about what else this untapped resource could be expanded into. To exclude our friends in California seem to be a shame so I picked up a 72 Thinline Telecaster. The result of this venture was another side of tonal euphoria. I found myself asking, why have I ignored such stunning instruments over the years? It could be just the guitar or for the pure love of yesteryear’s tones but plugging that Thinline Telecaster into an OR100 brings me to a place I never thought I could be. Finding your home in an amplifier is part of this exciting journey but coupled with a guitar as well, now that’s a thing of beauty. 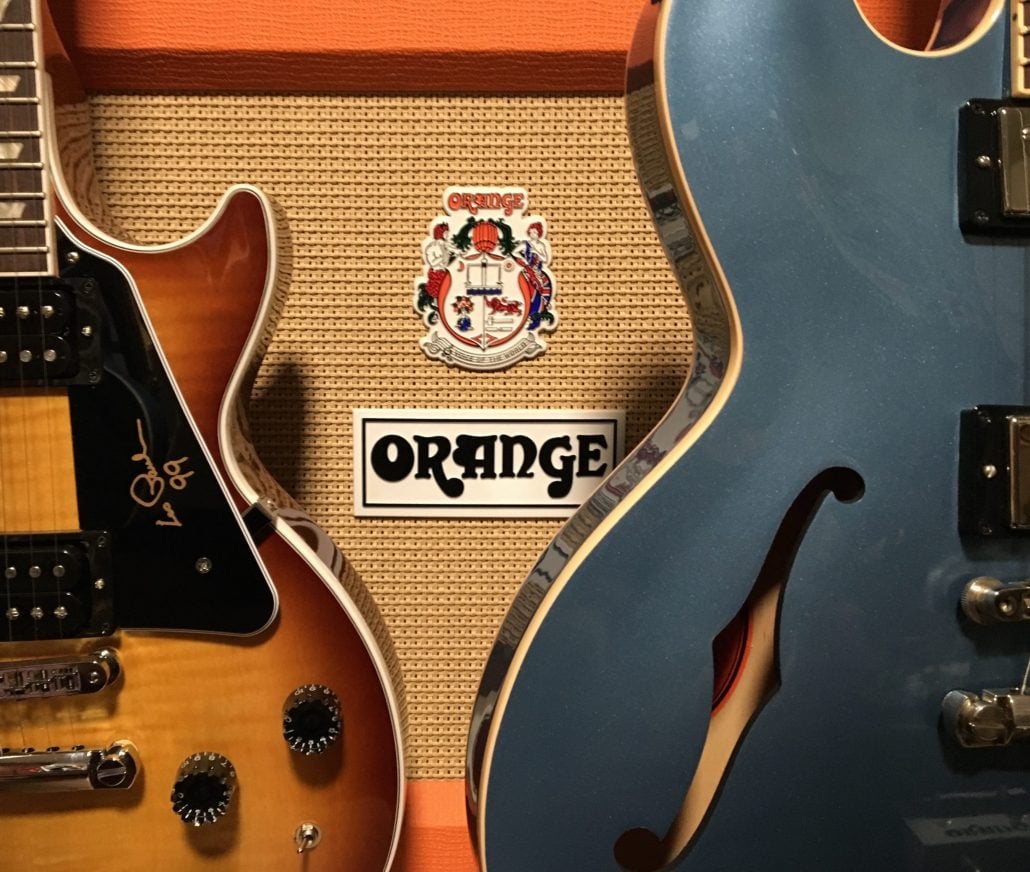 Based upon your weapon of choice a semi-hollow like an ES-335 might be the last thing you want to throw over your shoulder at your next gig. Traveling through the tonal possibilities and bending that feedback to your will can provide some outstanding results, not just ear-piercing shrieks. Learning to own those squeals can work in a variety of places both within a repertoire like in the last and final E chord you windmill as your drummer flies across the toms to bring a close to the night.

A semi-hollow body guitar might not be your first thought the next time you are in the market for a guitar, but I urge you to take a second look at a wonderful haven yet to be explored. As for me, my Les Paul still gets plenty of play time, but if I am leaving the house, I am grabbing that 335, a Telecaster and my Orange to share this new found love with the world.

Sef of Your Favourite Enemies Reviews the CS50