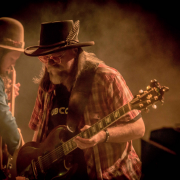 Marvin King and I have gotten to know each other pretty well over the last few years. I wanted to know how he’s enjoying his son’s phenomenal success and as a touring guitarist himself for many years, just how proud he is of his son. We were chatting away on the phone when I realized that I had better turn on the recorder and get to it.

[Marvin] This world we live in now is so different, you know. I think if this were the 70s or 80s he’d already be all over the radio.

[Pat] Well, because we had consolidated radio, we all listened to the same music. Now it’s so widespread. But anyway, I gotta go meet a tour manager at the showroom and swap some cabinets out at 2 o’clock. So, I’m gonna get on with this. All right?

[Pat] Marvin, you brought an amplifier to the Marcus King Band Family Reunion Festival in Asheville, North Carolina a few weeks ago, which was fabulous. And it was an old AD15. So, is that an amp that you’ve used a long time? And is it, perhaps the first Orange amp that Marcus played through?

[Marv] Ok. The amp that I showed to you and Jon actually belonged to a friend of mine and Marcus’, Charles Hedgepath, who plays with the Shady Recruits. I sat in at an after party one time here in Greenville. The stage was loaded with big amps and they tell me to play through this little Orange. I said ‘OK, what the heck’ as it was mic’d up and all. So, I jumped on it and I said ‘holy crap!!’ I played it and absolutely fell in love with that amp!

You know in about 1970, I bought a Marshall stack. At that point I never had heard of Orange except maybe from Wishbone Ash.

When I saw the Allman Brothers. I saw them in about 72 here in Clemson, they opened for the Brothers and they had all Orange amps. And I said, ‘oh man,’ cause we were already doing Wishbone Ash songs before we saw them. I believe ‘Jailbait’ was a song we were doing then. But I thought they were a great band. I thought they sounded awesome. And the Orange amps just blew me away. I just loved the way they looked and sounded.

From 1970, I think it was, not to bring up the friendly competition, but I bought that Marshall. I used it for several years and then it got to where I had gotten married. I had to play to eat and feed a family.

I had to play stuff that I couldn’t use the Marshall for anymore, you know. It’s just too rock and roll. Like top 40 club crap. So, I just got a [Fender] Twin and used pedals. But my whole career, Pat, and I’m not kidding, I’ve always tried so many pedals and amps and stuff that would work, and I know in my head I’ve always been wanting to get that sound that, you know, I cut my teeth on. When I played through that Orange, I went, ‘that’s it, that’s the sound I’ve been looking for,’ you know. Celestion speaker, British tube design, and its orange, too. How cool is that? So, I loved it. I loved that amp.

I said, ‘Charles, I want to buy that amp,’ and Charles, of course, said ‘man, if anybody, I’d sell it to you but I ain’t selling it. It’s my amp, sorry. Maybe I can find you one.’ You know, then I told Marcus, I’ve gotta find an amp like that of my own. But as far as Marv goes, that was my first experience with that.

And you asked about Marcus. I think Marcus played down in a little place here called Chicora Alley in Greenville where Charles was playing. And he sat in there and Charles let him use that amp. If I’m not mistaken, that was Marcus’ first experience with an Orange amp. And he dug it, too. He really liked it. You know, he was only about 13. He had Xs on both hands. He wasn’t supposed to be in there, that’s for sure. In South Carolina you have to be 21 to be around alcohol in a bar.

[Pat] Well when I first met Marcus that was the first thing that he said to me is that his dad had always loved Orange, so that was the connection for him. He was very receptive to trying some Orange amps. We got talking and we just hit it off. And that was a good few years now.

[Marv] So, when Marcus and you guys were so nice to get me that AD30 Combo, I mean it just was a beautiful moment in my life when he gave me that. I was just tickled to death. And then, you know, just for me. I’m 66 years old. I’m back at the same level I was when I got out of high school, but I’m 66. Until I sit in with Marcus, then I’m up there. You know what I’m saying.

[Pat] You played with Marcus and Doyle Bramhall II at the Family Reunion Festival. Have you have you gotten up on stage with Marcus before? And how does that feel to be on the big stage with your son?

[Marv] Oh, it’s phenomenal. I mean, it’s the planets lining up. I leave my body when I when I do that. And no, that was by no means the first time, you know, since he’s gotten to that level. I’ve sat in with him many times down in the (Allman Brothers) Big House and Theater there in Macon. Just a lot of really cool venues. He brings me up and lets me play and there’s a magic to it. Yeah, I’ve played with MY dad and people just, I don’t know how to explain it, but there is a magic to see a father and son play together.

[Pat] Yeah, he even played with Clapton for a couple of years.

[Marv] I told him afterwards, Doyle, I can’t believe I just played with you.

[Pat] I know that for Marcus, family is really important, obviously. And, you know, he told me the first day I met him that he plays his granddad’s ES345 and he told me a little bit about that story and all. So, your father was also a musician?

[Marv] Well, you know, my dad was in the Air Force but he was in the Army initially and that’s where he met my mom in Munich, Germany, and they got married. Then in 1952 or 53 they moved back to the United States. But dad didn’t play for a long time. We were stationed in Montana and he had bleeding ulcers. And the doctor said, ‘Sergeant, you’re going to die if you don’t get a hobby, do you golf or anything?’ And he said, ‘no, I don’t do any of that stuff. I love to play music, but I haven’t been able to play music in probably 10, 15 years.’ ‘Well, you better start playing again or are you going to die, you need a hobby.’ So, he went out and bought the Holy Grail. He bought that Gibson 345 and a black face Fender.

And then from there forward, he played every weekend. He had a country band, so he taught me Buck Owens and Haggard. I really enjoyed The Ventures and he played Chuck Berry a lot so I learned some of that. My dad played fiddle, too, you know. That was his first instrument.

[Pat] So it took three generations to produce Marcus King the guitar player?

[Marv] Actually, my dad’s father and my grandfather’s father were all fiddlers and my grandmother played acoustic guitar. My grandpa played fiddle you know, so dad had it in his blood. Now I have it in my blood and Marcus in his blood. We can’t even help it. We just, we come out of the womb looking for something to play, you know. Yeah, and it goes all the way back.

[Pat] I know I’ve told you the first thing that impressed me about Marcus, just meeting him, before I even heard him play was his awareness of great music. He was talking about organ players. He was talking about Jimmy Smith. Then he was talking about Curtis Mayfield and the Stax stuff. He invited me to come see the show here in Nashville. And I could hear all these influences like Motown and Curtis Mayfield and Stax-Volt and all this. I was amazed that somebody that young had not only an unawareness of that stuff but seemed to have a real knowledge of it and had absorbed it into his playing.

[Pat] Yeah, he’s very knowledgeable, and he’s an old soul. I mean, you would think that I turned him on to all this stuff. Well, a lot of that stuff. He turned me on to, you know, like being in the Air Force and on a base all my life. I knew Hendrix and Cream and Zeppelin and all that. I just knew they were blues rich bands, but I didn’t know anything about the blues, you know. So Marcus, he just gravitated to that. I didn’t push it on him. He’s just an old soul and he just liked that stuff.

[Pat] Well, he told me once that that he at one point growing up didn’t want to listen to Hendrix and Clapton and all those guys because he didn’t want to be influenced too much by that. He said he started listening to horn players and keyboard players.

[Marv] Absolutely, he did.

[Marv] Yeah. And he just plays what the song needs and no more. He never overplays. It’s great. Have you listened to “Huge in Europe”? You’d really enjoy that especially coinciding with this interview. And it’s an album my band did called “Marvin King, Huge in Europe” Featuring 11 year-old Guitar Slinger Marcus Lee King. You’ll see little Marcus with his cool hat on and his old Stratocaster. You know, you should get that record. I put an asterisk by his solos so his friends would know, because I’m serious. You listen to it, his solo playing at eleven. Okay. I’m forty some years old at that time. Been doing this all my life. His playing at eleven in the studio for his first time, just listen to it. How reserved and how in the pocket he plays, it blew me away. So, I put asterisks so you would know when he’s playing, cause you can’t really tell whose playing him or me.

[Pat] Thank you very much for everything Marvin.

[Pat] And Marcus has been incredibly loyal and supportive to us at Orange. I just see great things continuing to happen for him. I always have since the day I met him.

[Marv] Oh, yeah. All right, my brother. I’ll talk to you soon. All right. Thanks so much.