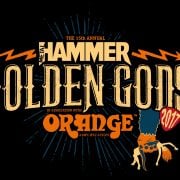 Orange Amplification is excited to announce their Ambassadors Mastodon are headlining the 2017 Metal Hammer Golden Gods. They will be joined by fellow Ambassadors, Clutch and Orange Goblin.

The 15th annual Metal Hammer Golden Gods Awards will take place at The Indigo at The O2, London on Monday 12th June 2017. Fozzy frontman and WWE megastar Chris Jericho will travel straight from Download Festival to host the show, which promises to be the biggest rock party of the year.

American rock golden gods Mastodon released their latest Album Emperor of Sand in March and will be touring the UK and Europe throughout the summer, including Download. They have won two previous Golden Gods awards, For Best Shredder and Best Album and this year are nominated for Best Live Band.

Joining them for an evening of metal merriment is Clutch who are currently touring Europe in support of their eleventh studio album Psychic Warfare. Orange Goblin will be returning to rock the stage as part of their extensive European tour to promote their latest album Back From The Abyss.

Other Orange ambassadors included in this year’s Golden God nominees are: –

Best UK Band: While She Sleeps

Orange Amplification are also sponsoring the prestigious Defender of the Faith Award. Voting is now open at http://2017.goldengods.teamrock.com where there is a full list of nominees and you can vote for your favourite.

To find out more about Orange Amplification, its products and its artists please go to https://orangeamps.com/.