Welcome to the Orange family, ladies! You’ve been around the Manchester scene for a while now, can we get a bit of background on the band for those new to you?
WITCH FEVER: We’re Witch Fever, a doom punk band from Manchester. We met during uni and have been a band for four years, with a line up change after the first year, and it’s been the four of us, Amy on vocals, Alisha on guitar, Alex on bass and Annabelle on drums ever since. When we started we knew we wanted to be heavy, and wanted to create music that empowered us and other people. We all have a very varied music taste which comes together to make the Witch Fever sound. Here’s some of the stuff we’re currently listening to:

One of our musical highlights so far was headlining House of Vans in London for Venn Records, particularly because V Man, the bassist for Slipknot, was there! We also played Manchester International Festival on a stage in front of the town hall which felt very special. Last year Alan Mcgee of Creation Records produced our singles Bezerk(h)er and The Hallow which was brilliant and something we’ll never forget.

Obviously the whole music industry’s come to a bit of a stand still lately with gigs, touring and practicing together off the table, how have you been keeping creative and connected?
WITCH FEVER: We’ve been recording demos to send over to Gomez (Orgone Studios) who we’re going into the studio with in July to record an EP, so we’ve mostly been focusing on writing new music. Outside of music we’ve been reading a lot, making art, cooking and Alex has played lots of Animal Crossing.

Exciting times with new music ahead, and that’s awesome you’re recording with Gomez! How did that all come about?
WITCH FEVER: We were connected with Gomez through a label we’re working with at the moment (yet to be announced…) so we’re very excited for whats to come! We’re recording an EP for now, but there’s talks about an album afterwards.

Of course, we gotta ask some Orange! What’s your history and experience with our amps?
Amy: My first memory of Orange comes from when I was a child, my Dad’s been in bands since I was young and plays bass through an Orange amp to this day. It always stuck in my head because of the colour, being the brightest thing in my parents bedroom. As a teenager I also developed a love for Cancer Bats and Slipknot, so there’s that association too! 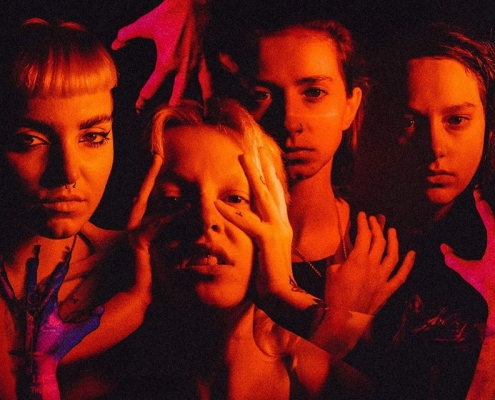