Our second ‘How I got into playing’ post where we as part of our ‘Learn the Orange Way’ campaign, offer free guitar lessons for all Orange users (more on that here), and share a series of quotes from some of our artists on why how they got into playing.

I picked up the guitar when I was 14, and I think my dad’s very much to thank for that. He wasn’t a musician himself, but he was very interested in music, and it was something that was a part of my life from a very young age; him playing various country and classic rock records around the house. I first started playing acoustic, but it only lasted for about a year as I realised electric was more my thing. I was just playing around at home, and signed up to Youtube where I started sharing videos of cover songs I was playing. I didn’t really think much of it besides wanting to share my passion with the world, so the response was pretty overwhelming as I ended up getting millions of views! Back then, it wasn’t many females my age doing that sort of thing, posting classic rock covers, so there seemed to be a market for it and it definitely helped me get where I am today!

I initially started out playing drums as a kid, and didn’t really get into guitar until I was 17. I’d watch people play Nirvana covers on YouTube and just copy what their hands were doing, that’s how I learnt the basics. I guess already knowing how to  play an instrument was a bit of a head start but I wouldn’t really say I’m a real guitar player, I just wanted to be able to play the Nirvana songs.

Starting it all off and sparking the interest was definitely the household I grew up in, both my parents and older sister was very into music. My dad in particular is pretty much a rock ’n’ roll historical – not as a profession or a job, but for as long as I can remember he’s just always had this encyclopaedic knowledge about dates, record companies, releases, band members and tours, and he has this amazing vinyl collection that I’d go through as a kid, pick albums to listen to based on their covers and end up with bands such as KISS and The Monkees, but it wasn’t until he played me The Beatles everything changed; I even remember the day and exactly where we were, sat in our car parked up waiting for my sister, and he played me live at the BBC by The Beatles, and I think I must have been about six or seven, I was really young, but it just felt like real life magic.

It’s been quiet from The Wytches for quite some time now, what have you been up to?
We’ve been working on a new album. It’s been a long process but we were so conscious of not
just rushing into another one, which we did with All Your Happy Life. We are also excited to get out playing again because it will be almost a year since our last show.

Last time we spoke you mentioned running an illustration business called ‘Oh So Grim’, is that still going?
Yes it’s still going and I’ve a few new shirt designs that will be ready to go into my store soon. I’ve also just finished illustrating a children’s book for a friend. She is publishing it very soon so I’m excited to see it in print.

Are you behind The Wytches’ artwork? If not, who is, and does the person work closely with the band to do so?
No, I don’t do the art, it’s an artist and friend called Samuel Gull. Sam did all the artwork for The Wytches’ previous records and I think our music and his art go perfectly together. But no, we don’t work that closely with him on it, He’ll listen to the music and come up with his own interpretation of it. He’s never come back with anything we have thought was wrong for the record.

You mentioned a new album, what can you tell us about it?
Well all I can say is it’s written and demoed, so we haven’t been in to record it just yet. We are still looking at studios and deciding who we want to work with but it will most likely be self produced. The aim is to record it before the year is out and release next spring.

What do you look for in an amp?
It needs to be able to work with my bass in a way that feels right to me. I’m not that tech minded so I just go by feel most of the time. The head I’ve used since 2014 from Orange feels like it was made to work with my bass and I can get the tone I need really easily from it.

You’ve been using Orange for quite some time now, can you tell us about
your current set up and why you’ve picked it, as well as any other Orange amps you’ve
used?
I currently use an Orange Bass Terror through a black Orange 810 cab. I originally chose the
terror head because I loved how simple it was and how easy to use it is, and I chose the black 810 cab because I’d used a 410 cab previously when we toured in the States. I loved the tone, but I found I was always leaning down to hear it onstage so it just made sense to get the bigger one.

What would your dream rig be, and why?
Not sure about dream rig but I’ve always been interested in the idea on running my bass through my current setup as well as a guitar rig and blend the two together.

Kristian, first of all – welcome to the Orange family! Can you tell us a bit about why you wanted to swap over and which amps you’ll be using?
Thank you for having me. Well my amp broke a while a go so I started using Dan’s touring Terror Bass that he’d left at my house. I’m not sure if that’s bad for the amp or anything, but it sounded great so at practise I started using an AD30 they had at the rehearsal space. My old amp didn’t have a gain knob, so I had a gain pedal for clean, but had to turn it off when a fuzz pedal was on. The big muff sounded better to me going through a clean amp, but with the gain of the Orange it seems to make the fuzz sound better.

Do you remember your first ever encounter with Orange, whether it was seeing someone else play it or playing it yourself?
I remember seeing a Black Sabbath video with some Orange stacks in the background, and I loved how vibrant they looked matched with dark music. A friend of mine at school also had an Orange head and cab which I thought looked and sounded great, he was the first person I knew who actually had one. He is an amazing guitarist with a kind of Sabbath sound and I used to love hearing him play.

It’s been quiet from The Wytches for quite some time now, what have you been up to in the meanwhile, any other musical adventures?
I released an album with my other band ‘The Mark and Kristian Band’ earlier this year, as well as recording a few other bands, and I find it really beneficial working and recording with others as it makes me think more about guitar tones and sound.

Can you tell us a bit about how you got into playing in the first place?
I initially started out playing drums as a kid, and didn’t really get into guitar until I was 17. I’d watch people play Nirvana covers on YouTube and just copy what their hands were doing, that’s how I learnt the basics. I guess already knowing how to  play an instrument was a bit of a head start but I wouldn’t really say I’m a real guitar player, I just wanted to be able to play the Nirvana songs.

What are you currently listening to?
I’ve been listening loads to these two Captain Beefheart albums, ‘Spotlight Kid’ and ‘Clear Spot’, and not much else. I didn’t know much about him before and was told those two albums were some of his more conventional ones, but they still sound pretty out there to me!

What would your dream rig be, and why?
I really like the 50’s and 60’s Gibson ES hollow body guitars. I used to have an ES120, but sold it a while ago. I’d love to buy that back and have a good quality tremolo pedal, the one I have was like £15 on eBay, but it does the job I suppose. I like the old hollow bodies because they have this ‘plonky’ sound that seems good for a lot of genres. Surf, jazz and rock ’n’ roll. 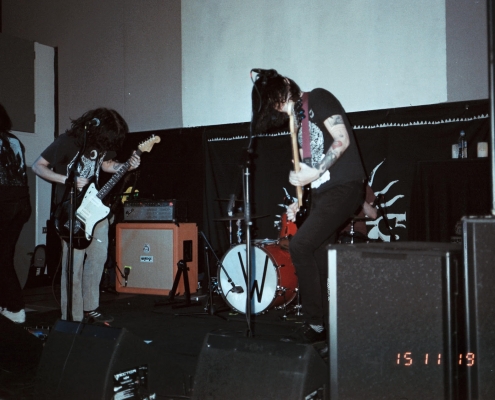 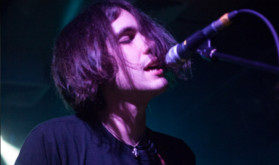