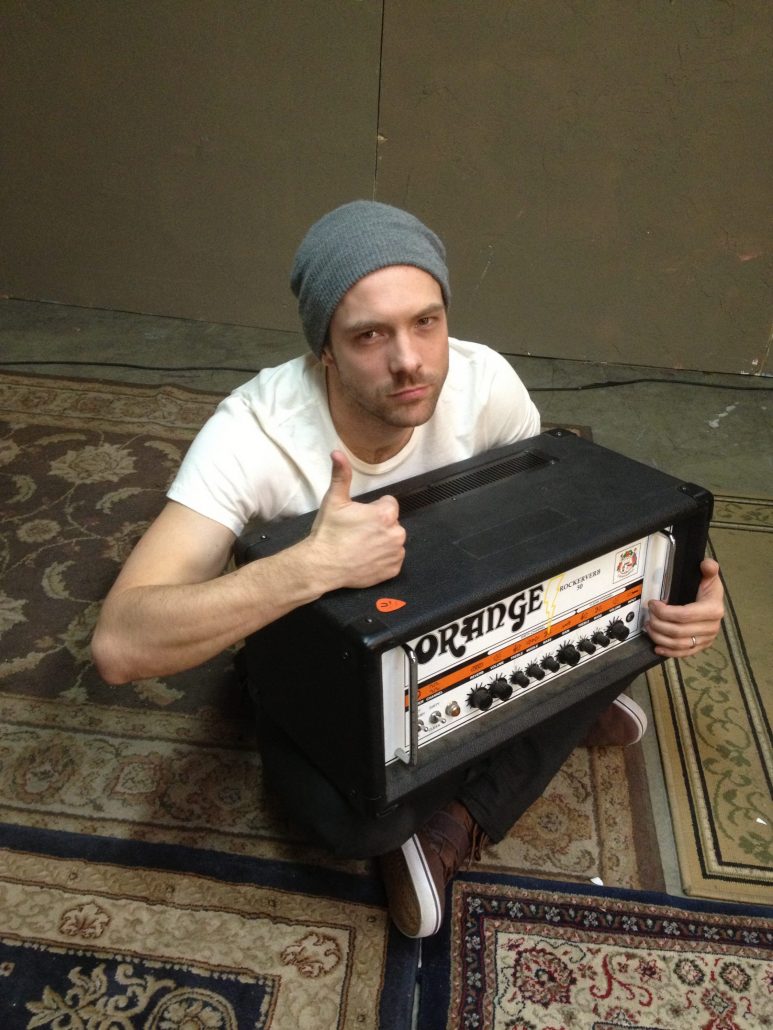 So will you tell us where you guys come from?

Quinn: Yep, The Used is originally from Utah, from different parts and areas, different areas from around Provo, Layton and met up all Salt Lake area, but right now I’m the only one who lives in Utah. The rest of the guys live in L.A. and Australia, Burt does. We’re scattered at the moment but I guess that’s kind of our head base, that’s where we record and do other things.

You guys just came out with a new record, how has that been going?

Quinn: It’s awesome, we did it ourselves we recorded and produced it ourselves, it was just really fun. We had about five or six songs from our practice sessions and we went into Hurley studios they had kind of told us for a couple years that we could use their studio for free and we thought these were some good songs. We wanted them to sound grungy and thrown away anyways so we weren’t looking for a specific polished high fidelity kind of thing. So we did it ourselves and to be honest I had the most fun I’ve had in a long time recording, doing it like that.

So what Orange have you been using so far during this tour?

Quinn: This tour and probably the last fifty tours I’ve done have all been with my Orange Rockerverb 50 MKII. I’ve been using that Jim Root #4 Head for about a year now almost but yeah I love it. It’s good high gain and also when I’m recording and stuff like that I can bring it down and it’s got a nice warm articulate kind of crunch. So it’s a good amp if you need to blend, I find it really good with single note stuff. Chords and stuff like that can be pretty thick and if you’re doing a really thick rhythm, simple rhythm with either a single string or power chords the Orange is nice and thick, everything articulates well. When you’re doing leads and stuff like that there’s a lot of tone behind each note and a lot of roundness in the sound.

Do you remember the first time you ever saw an Orange?

Quinn: I think the first time I ever saw an Orange was looking through my dads’ old magazines, like band rocker magazines. Seeing advertisements from the 70’s and seeing videos and stuff like that, I kind of always put it to the classic rock, I think it was like MC5 and some other people. Then over time and over time I kind of had the obsession with Marshall and the obsession with Mesa Boogie because everyone used to be doing that in the late 90’s. You know as a kid you start off and you get the really consumer Marshall amp that sounds like salt and pepper, a lot of high end and stuff. So when I first got an Orange I was just like they’re warm and they’re just a lot more of a tube amp than most tube amps. The first time I tried one I was with Glassjaw and Todd had one. This is back in the day, they were switching out amps and doing different stuff and companies were coming to them with different amps and stuff and I remember thinking well if Glassjaw, you know… especially on Todd’s side because he was the more kept together guitar player of Glassjaw and Beck was really a lot more of the rhythm and he would do all these really quick, I don’t know what he was using, he had a lot more gain and all the other stuff was Todd. I just thought they sounded great and it turned me onto it. It was a great amp, I loved it in recordings and people even ask me what it is and well I have this prototype rockerverb and then you know certain people I know, studio owners want that and they buy one and it doesn’t sound quite the same so I have to you know tell people it’s a MK one. There are certain things about it, it can get a little noisy when you gain it up, but most amps do that but that could be a tube thing because I switched them out. So I really do enjoy the sound of Orange, it works well for me and what we do.

So is it all stock the way you have it or have you changed a lot of things about it?

Quinn: I’ve had a few things changed with it. My old tech Drew Foppe, they sent it to him to do some work on it when he was out on the road with Slipknot and said dial this thing in. He sent it back and said here’s where I dialed it in, he dialed in the preamp in and sent them the settings and they said we’ll keep it now. So they sent it to him, and he was on the road with me at the time and so he let me use it and he just said you can keep it, so anyway it’s got a couple things to it that are modified but you know live I really find it when the gain hits around 2o’clock on the dial it really sucks all the tone into and pushes all the tone out like you can really here it, it really comes together right around then. When you back the gain down you have to make some adjustments to the preamp but you know if you’re going to gain down like if you want to bring down the bass a little bit because until that gain comes in when you have the gain it really pops the midrange and the low end too but low end is just always there. So yeah it’s interesting I just I keep everything right around 2o’clock on my mids, my lows, and my highs. I think my lows might be at 3o’clock and my highs are at 3o’clock and my mids are at right around 2 or 1 and sometimes I bring the bass down depending on if we’re inside then I bring the bass down, it tends to ring out a little more inside. Very versatile and very cool looking as far as aesthetics go, I like the old simple amp style, I like all the new amps they’re doing, it’s a really nice aesthetic. I think Orange makes great amps too for even just in the studio like one even Suge just got, my tech. I have several friends who play acoustic guitars through those, hollow bodies and they’re just great sounding amps.

Are you using any pedals currently?

Quinn: I’m using the full tone, full tone to overdrive. I do that for my leads it’s like a preamp boost. For out here one this kind of stuff I just over the years I just think it’s easier for me to go simple. So I have a DD-20 delay with infinite sustain since I’m the only guitar play I really need a sustainer or I need something to keep me in the mix but not really me playing parts, so I can step on that pedal and kind of fill in parts I just need to be in the mix. So I use that pedal a lot. I have my overdrive, my delay the DD-20, I have a phaser, I use a volume pedal. I use two amps so I volume down for my clean and my volume pedal has a little stopper on the bottom so I pull it back and I usually keep my volume knob down just a hair too because that’s just how I do my clean I just play dynamically lighter. I don’t comp my guitar out here, I don’t compress it or anything. I know I probably should but it works great for me it’s just really simple and then I have a PS-5 pedal as well that does like a pitch shift drop for me so like if we go into a part like out of a chorus into a bridge or something like that I can ring a note out and the pitch will shift down like four or five octaves. Yeah really minimal setup really. I don’t run a stereo rig or anything, I throw up a 57 and I think we have an audio technica mic on there as well that we’re trying out and it’s really great, it sounds great. I think I have three signals coming out.

What guitar are you using right now?

Quinn: I’m using a 2006 Gibson SG Standard with a custom five pickup and a Gibson Les Paul I’m using right now too. I usually play a Strat, I’m almost 75% of the time play a Strat but the weather out here and the heat in the trailer, I mean just look at the screws on the guitar from starting until now are rusted already so in this weather the SG is better I don’t know if it’s just because of the neck, but it’s sounding great. They’re both humbuckers and custom 5 seem to work very well with the Rockerverb, I would recommend that because I’ve tried five or six different pickups. I have a Jeff Beck Strat and I put in a custom 5 and I think it sounds mean as hell.

What have you guys been listening to on the road, and what’s been helping you pass the time?

Quinn: We watch a lot of documentaries; we tend to follow economics and world news stuff like that and when it comes to music it’s usually things we’ve grown up on or mostly strange guilty pleasures. We really, really like this band from Australia called Corpus. I would compare their approach to Middle Class Rut, it’s like that and At The Drive In. Like a 90’s discord heavy, but what heavy should be.

Quinn: I usually don’t eat all day, I don’t eat anything hardly ever. I usually munch on things, like I’ll have a banana or a handful of cereal. After show food 75% pizza and fucking pizza. I just don’t really have an appetite for food that’s processed, made, and built in this country anymore. When I’m home my wife and I try to eat as nutrient rich as possible so that means juicing and raw foods as much as possible. I was alarmed to learn your body rebuilds itself in nine months basically. Your DNA re-writes itself completely in three months, your bones regrow in six months; your skin regrows in like two weeks. So I’m like well I think it’s really important that I watch what I eat, that’s why I don’t eat a lot. I only want to eat what’s good for me.

Well thank you very much for speaking with us!

Quinn: Yeah thanks for letting me have a piece of the Orange pie.