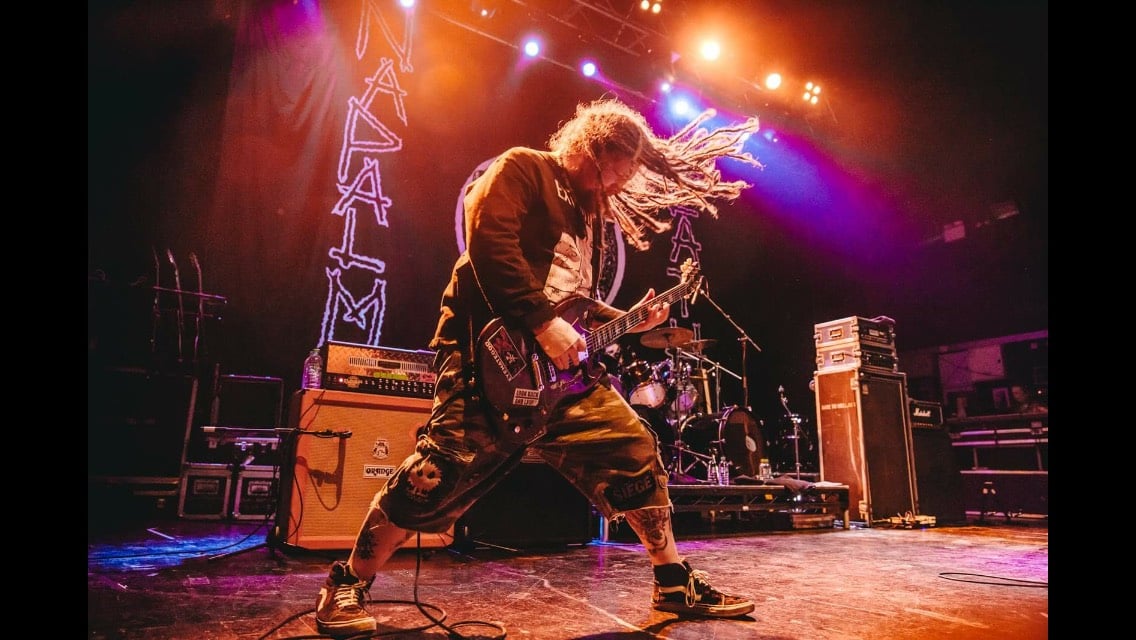 It’s a pretty neat bus you’ve got here, which I’m guessing will be your home for the next couple of weeks. I know you’re 15 shows into quite an intense tour, how’s the last couple of weeks been?
Yeah they’ve been good! A lot of sold out shows and the crowd’s been pretty crazy. We’ve also got quite a busy summer ahead, we’re playing Glastonbury which will be interesting – it’s quite a different crow. We’re also playing a few festivals in Germany and Romania, and I reckon we’ll be busy all the way up until December.

Whoa, that’s pretty busy. Are your days hectic when touring or do you get time to sit back and relax a bit as well?
When we’re on a tour like this one on a bus, it’s pretty relaxing. We roll in, and I get to sleep until 11 if I want to. When you’ve been touring for as long as I have, you end up having friends in lots of different cities, so before and after soundcheck I do get quite a lot of time to hang out and catch up with them. Flying tours on the other hand, is less relxing. You’ll end up having to get up at 4 in the morning after 3 hours of sleep to rush off to the airport, fly to where you need to be, hopefully have a nap, then play the gig and do it all over again – or change it up a bit and sit in a van for 16 hours, hah. There’s a lot of just sitting down in moving vehicles or planes…

What’s your history and experience with Orange Amps?
Before joining Napalm Death as a live guitarist, I used to be in a band called Corrupt Moral Altar, and I was actually endorsed by Orange Amps. I had a PPC412 and a Thunderverb 200 and I just really liked the tone and that big fat sound, especially that raw kind of tone you get from the speaker cabinets. I very much look at the tone when buying an amp, which is why I’ve ended up with and love Orange.

Were you a big Napalm fan growing up? And what other kind of music were you into?
I was definitely a big Napalm fan, and it’s kinda surreal to be in the band now. I also used to be in Venomous Concept with Shane and Danny from Napalm, which was pretty surreal as well. As far as music goes, I was into a lot of punk bands like the Exploited and Discharge as well, anything that was noisy really. Iggy and the Stooges, proto-punk and all that kind of stuff, and then after that it just got heavier and more and more extreme. I also listen to other stuff, one of my favourite bands is My Bloody Valentine, I like Lush, and a lot of shoe gaze with delays and stuff like that. Coming off stage with Napalm I’m not exactly gonna go and blast the same kind of music when I need to wind down.