Friday the 13th of November 2015, the unthinkable happened. Terrorists attacked Paris and the Bataclan where Eagles of Death Metal were playing a sold out show. 89 people dead, 99 critically injured. An absolutely shocking and disgusting attack on innocent people doing what they love the most, watching, listening to and playing music. Cowards with firearms, going after people with no way of defending themselves. It makes me sick to my stomach just thinking about it, and I cant even begin to imagine the hell they went through. 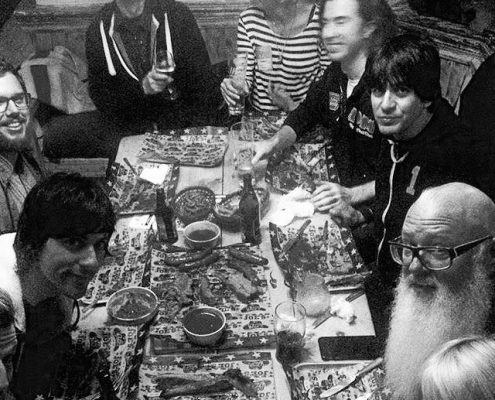 Just a week before, I was lucky enough to meet some of the guys before their London show, so it hit extra close to home. That could have been me, you, anyone we know. We all hear about the war but we don’t expect it to come knocking on our front door.

I wasn’t sure if Eagles of Death Metal would ever return after the shooting, but I knew that if they did, they would come back stronger than ever, like a phoenix from the ashes. Next Tuesday, they’re back in Paris, and I applaud them. It’s the biggest ‘fuck you’ to terrorism I have ever seen, and I’m incredibly happy the terrorist didn’t manage to take music away from them.

They’ve received massive support from the music industry, bands and artists covering their song ‘I Love You All The Time’ with all proceeds going to charity. I too wanted to contribute, and decided to gather some friends and acquaintances to have them do their own take on the song, whether that be a video or a studio recording. A lot of time, love and effort have gone behind these covers you’re about to hear, and I hope you’ll enjoy them as much as I do.

For these and a few other great covers, you can follow this playlist. Help spread the love, donate to The Sweet Stuff Foundation and play rock ’n’ roll, loud.