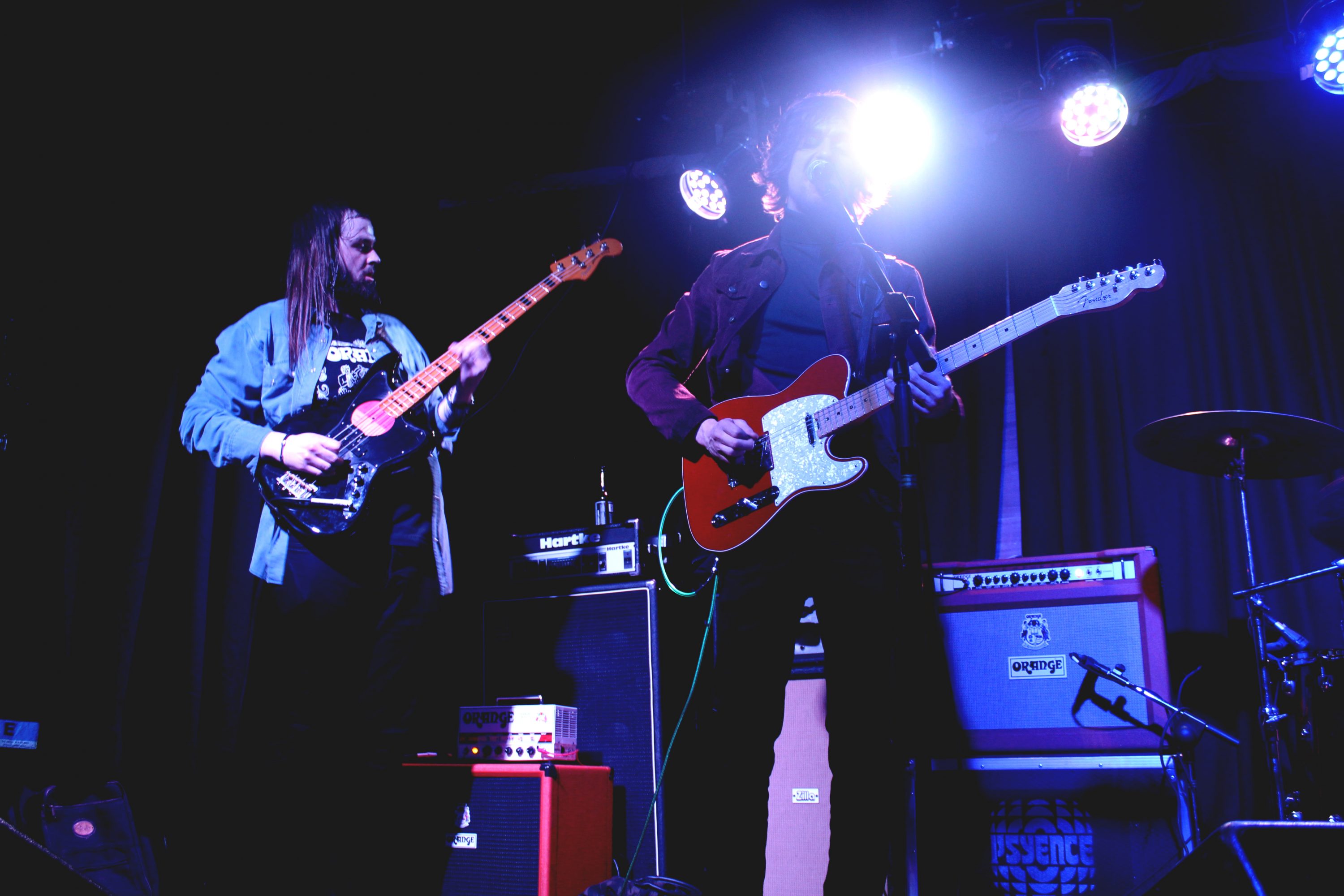 Hey guys, what’s up, what’s up – who are you, and you give us the lowdown on the band you’re in?
Stephen: My names Stephen Pye, I sing and play lead guitar in Psyence and have been since 2012. We also did some stuff together before Psyence when we were still in school.
Jamie: I’m Jamie Bellingham, and I play bass. And yeah, we have done some stuff before Psyence, some stuff that we don’t talk about, remember…?

Well, obviously now you’re gonna have to tell us…
Stephen: Well, when we were about 14, we were in this school variety show, Jamie on bass and me on guitar, and we covered ‘I bet that you look good on the dancefloor’ by Arctic Monkeys. Somewhere out there there is a video, and it’s hilarious. Obviously nothing we’d ever let you use in this interview though.

(Ok so I will totally search the darkest corners of the internet until I find this video.)

You just released your latest EP ‘A New Dawn’, which is awesome, and also quite different from your older stuff which seemed to be a bit heavier. Did you guys purposely change direction or did it happen naturally?
Stephen: Two of the tracks on that EP, ‘Cold Blooded Killer’ and ‘The Bad Seed’ has that sort of generic ‘Psyence sound’, then we’ve got ‘Falling in Love Once Again’ which is a bit spacey, a bit of a loose jam and kind of a mix, then what I wanted to do personally for the EP was to get a really slow tune on there, because a lot of my favourite bands from over the years have always had slower tunes on their records, so we did ‘A New Dawn’, which worked out really well, to be fair.

Personally I’ve never been to Stoke-On-Trent, but I know it’s not exactly the biggest and most buzzing city in the UK – how is the music scene up there?
Jamie: It’s perking up and there is a lot of aspiring new bands.
Stephen: A lot more bands now than when we first started, and we’re obviously not the first ones to be doing what we’re doing in Stoke, but a lot of bands similar to us did appear after we started gigging. We really, really pushed the band, and since that it’s become this whole new scene.

You originally started out as a five piece, then turned into a four piece, until having second guitarist Jamie Cartlidge join the band last year, how has it been for you two having a second guitarist back in the band?
Stephen: Basically, we went as a four piece for about two years, and in the studio I would lay shit down five times, to then realize ‘how the fuck do I do this live?’
Jamie: We got to a point where we realized we couldn’t replicate what we did in the studio when playing shows, so it’s taken a lot of the pressure of the two of us, and has given us more freedom. I mean, he’s a bit of a prick, but fair enough, he’s a decent guitarist…
Stephen: He’s definitely still on probation.

So he’s like the new kid being bullied?
Stephen: Yes, he is and he will continue to be for a while. On a serious note though, going back to being a five piece, has been a lot easier than it was being a five piece in the past.
Jamie: And to be fair, most of what he says is comedy gold, he’s a good guy, Jamie.

Obviously you’re both using Orange, so can you tell us a bit about your history and experiences with the brand?
Stephen: I remember first time ever seeing an Orange amp, and although I don’t remember which one it was, I just remember being so attracted to the bright colour. I’ve been through various amps over the years, Fenders, Marshalls, what so ever, but the Orange sound is just massive. Besides from them sounding awesome, I just love looking back when we play and seeing them, it looks mint! I’ve got a Rockerverb MKII, and it sounds amazing. I definitely want an Orange extension, and I’m never going back to another brand now.
Jamie: I think the first time I ever saw one was when watching The Enemy, and it was just like a beacon on stage, I just couldn’t keep my eyes of them until I got one. I had two Ashdowns and I blew ‘em, had a Peavey which I set on fire, so then I decided to splash out and got myself an Orange and I never looked back. I’ve got OBC212 cab and the Terror Bass 500, and I do want to get another cab as well.