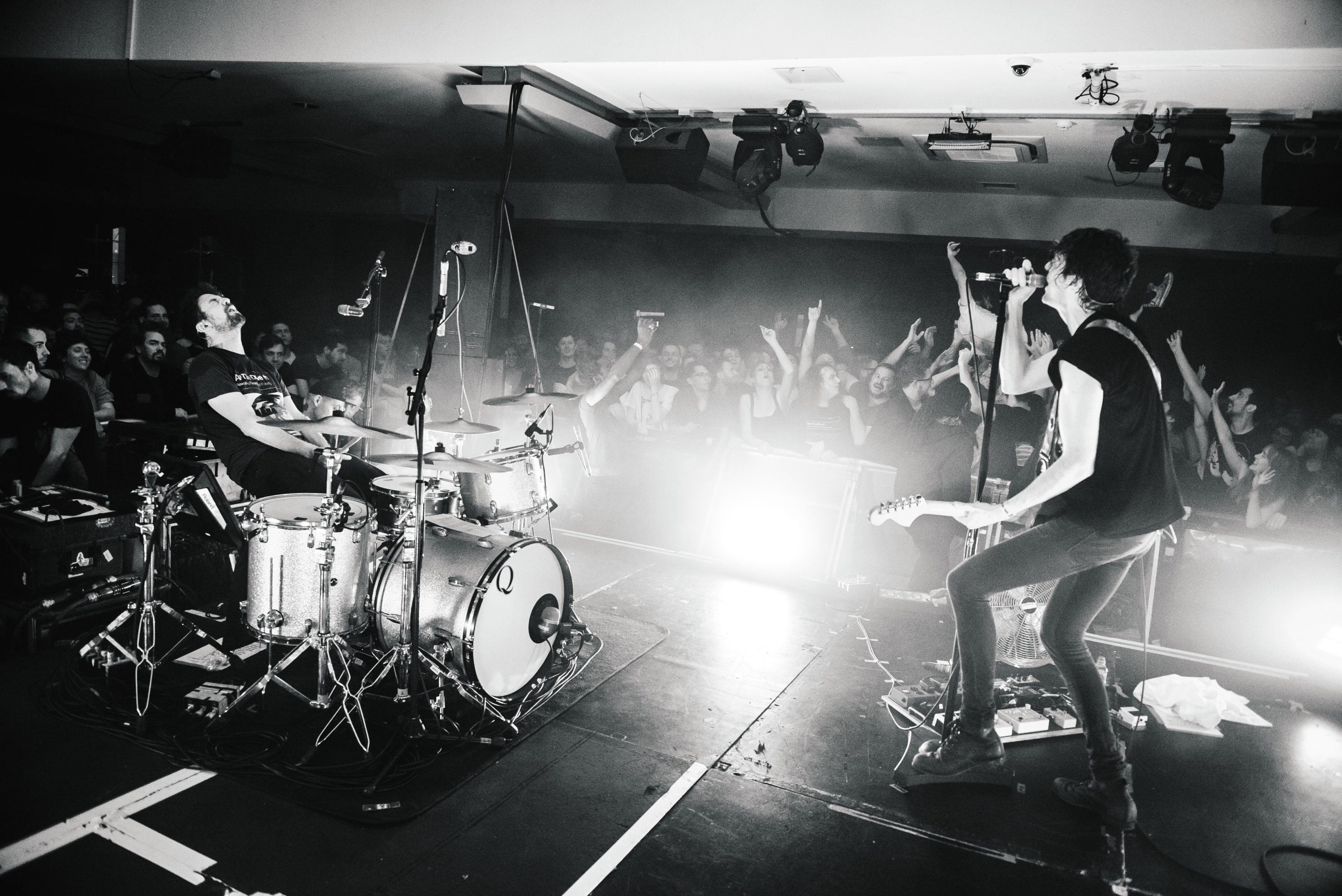 You released your latest album ‘Near to the Wild Heart of Life’ in January, a record I find – not necessarily more tidy, but more polished than a lot of your previous stuff.
I feel like when we started the band we wanted to be one kind of band and make one style of music, and that’s kind of what we did. We’d write a certain kind of song, record it a certain kind of way, play a certain kind of show, and we did that for several years, two records and about 500 shows. I think by the time we finished that we were both older and had been doing it for a while, and we’d discovered new music and kind of just began to be interested in doing things a bit differently. We were looking for a way to keep the band going, but also to keep ourselves very excited and interested in it. It’s easy, when you find success with a certain sound or certain kind of song to continue to do that indefinitely. Most people are glad The Ramones or AC/DC never drastically changed their songs or style of playing, as they’re both bands that do what they do incredibly well, that you don’t want them to stray from that, then there’s other bands that are equally as great, where part of their greatness comes from them deciding to switch things up and explore sonic territory with different kinds of songs, and those bands wouldn’t be as great if they didn’t do that. David Bowie wouldn’t be who he was, if he continued making the same record for 40 years. There’s that adventurous and rebellious nature in making music that can lead to spectacular failures, but also spectacular success, and I think we kind of looked at ourselves and the band and decided that for the third record, we could be going into either of those directions, but we had been in the game long enough to feel comfortable taking that risk.

Things that never used to interest us we began to find very interesting, changing the way we write songs, how we record them – just experiment more. Try to break out of our comfort zones. It’s our third record but in many ways it feels like our first record all over again, because we kind of just decided to ignore our past and do whatever we thought felt good, sounded good and what we were interested in, and in that process there was a lot of learnings both good and bad, but I think that’s what kept it interesting for us. Now that we’ve got that one record where we’ve started drifting away from what we were doing before, now it’s ok to explore some more. We play in a two piece band, and when a lot of people think of two piece bands, I think they typically think of minimalism, that the songs and recording will be done in a very minimal manner, and I think we’ve always had that opposite attitude where we’ve always wanted to see how big we could make everything sound, even if it was just the two of us, and I think that’s where we’re at now, with how we record those songs now. We did the minimal and lo-fi thing for a while and it was great, but for us there was no more adventure left in that. We know how to do that, and there’s no risk.

“There’s that adventurous and rebellious nature in making music that can lead to spectacular failures, but also spectacular success, and I think we kind of looked at ourselves and the band and decided that for the third record, we could be going into either of those directions, but we had been in the game long enough to feel comfortable taking that risk.”
Brian King, Japandroids

With this album we knew that it would alienate some people who were really into the old records, but at the same time, most great artists alienate people along the way. That’s just what makes their careers as a whole so great, that they’re bold and adventurous artists, and that’s the sort of the company we want to be in. I think my point is, that we don’t want to be that sort of band where you can reduce our sound to one simple song or record. As I mentioned before with David Bowie, not that I’m comparing us to him in any way, but with him – you cant just play someone a song and say ‘this is David Bowie’, you have to play them at least twenty songs as he covered a lot of ground.

You mention exploring new musical territory – I know you recently played a show with At the Drive In, a band which sound is pretty different from yours, is that one of those newly found sounds or someone you’ve been listening to for a while?
At The Drive In is a band Dave and I was really into ages ago when they first were around, so to get to play with them was really cool as they were a band we’ve always looked up to and idolized. Even though our music is very different from theirs, we share a similar ideology behind the music and how we play it. Both bands go out on stage and try to perform as intensely as possible. Dave and I always go on stage and try to give everything we have to give, and those guys do the same thing, the difference is that there’s five of them, and when you have five guys giving their all to their instrument, and giving it as tight as those guys do, it’s pretty fucking spectacular. There’s some sort of release that goes on when they play, they physically let go and give their entire body to perform that song and that set, and that’s what we have in common with them. 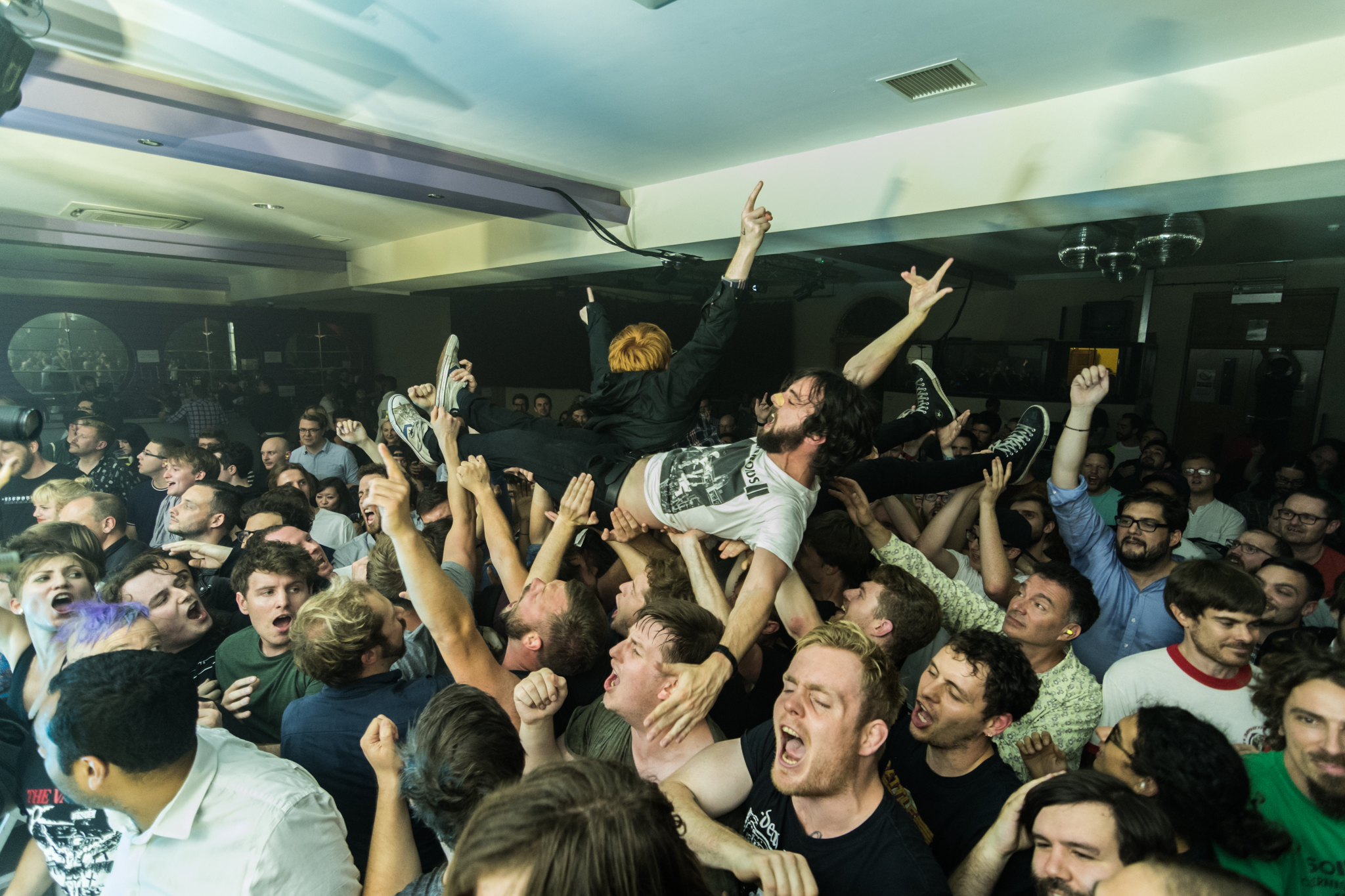 With you guys only being a two piece, there is a lot of pressure on you as a guitarist – what do you look for when selecting your amps, and what do you take into consideration?
When we first started playing together we had drums, one guitar and one amp and double microphones, very minimalistic, but that’s sort of all you really need. The White Stripes proved that you can be very minimal but still write great songs and put on a great show, and become one of the biggest bands i the world in their time, and that’s how we started. As I mentioned earlier though with us changing up our sound and what we do, we decided that instead of embracing that minimalism, we wanted to sound bigger than we really were capable of sounding. First, we added a second amp, and then a bass amp. After that, a third amp. What you start doing is creating this Frankenstein monster of amplifiers, and the idea is that each one is creating a different sound that on it’s own, necessarily isn’t anything special, but as a whole becomes something really big, really massive. Another thing we take into consideration is if the amps can actually survive to be an tour with us, as we treat our gear pretty rough. We’ve been using Orange cabs for quite some time now and they sure can take a beating.

In a few hours, you’re about to play one of the Fluffer Pit Parties, as show that’s set up completely different than a normal gig, with the stage and band in the middle of the room and the crowd 360, how is your approach to that?
99,99999% of the shows we play this year, we’ll be facing the crowd, so the fact that we have to re-think the way we set up, and the way we perform means that it wont be a typical show. There will be people here who’ve never seen us before and might not ever get the chance to do so ever again, so we’ll be trying to bring our ‘normal’ and proper Japandroids experience, then there’s people who might see us every time we’re in town, so we also want to give them a different experience than what they’ve seen from us in the past. We’re gonna set the amps up on the floor and have the stage pretty clear, which is very untypical for us as it’s normally pretty tight and we’re a bit boxed in, so I guess there will be a lot more room for me to spin around and play. Just given the set up and the fact that we’ve never actually played this way, I cant say how it’s going to go. I think it will very much be one of those ‘in the moment’ situations where you just get up there and get on with it and see where the vibe takes you and lay the land as you go along. 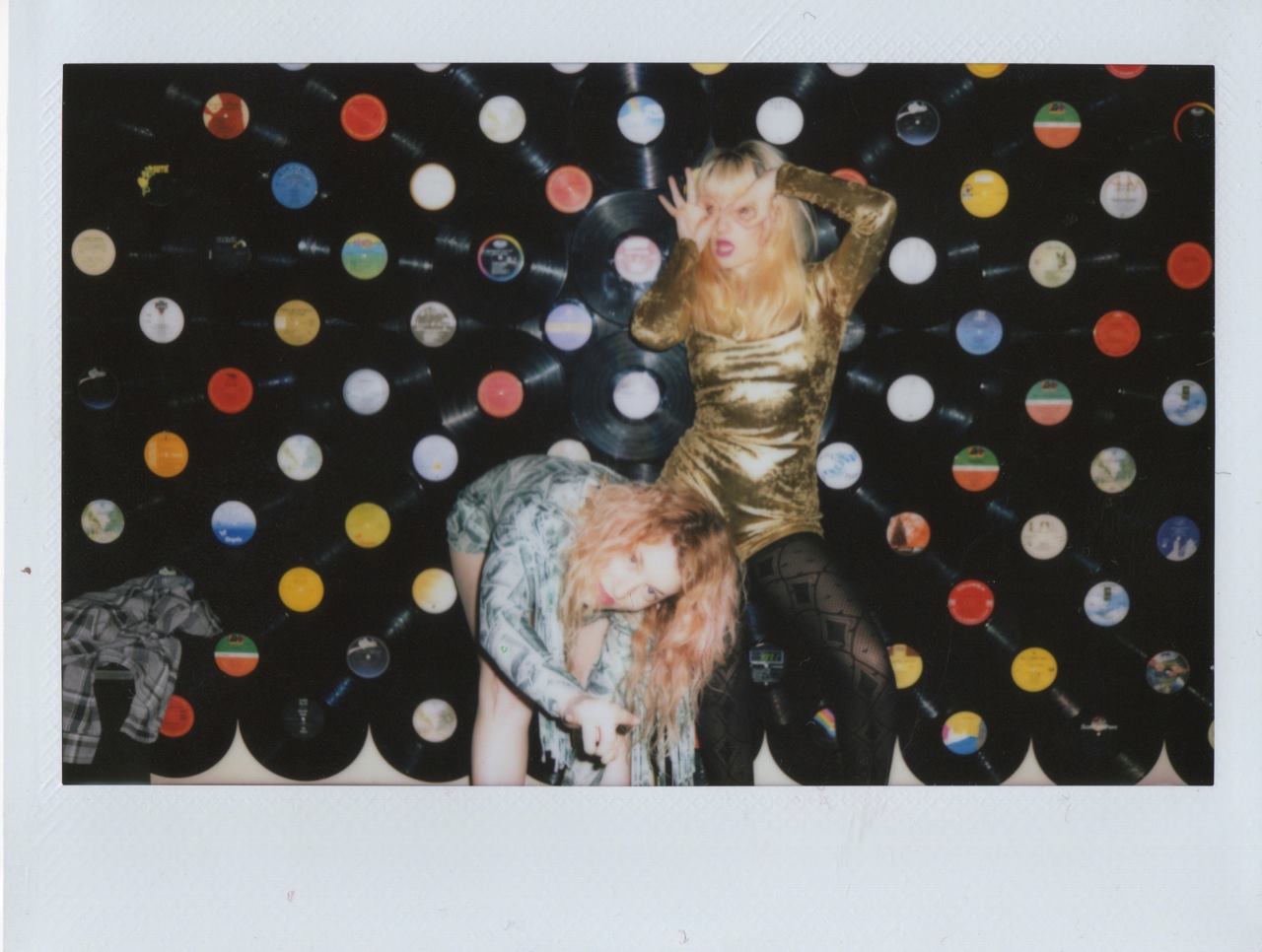 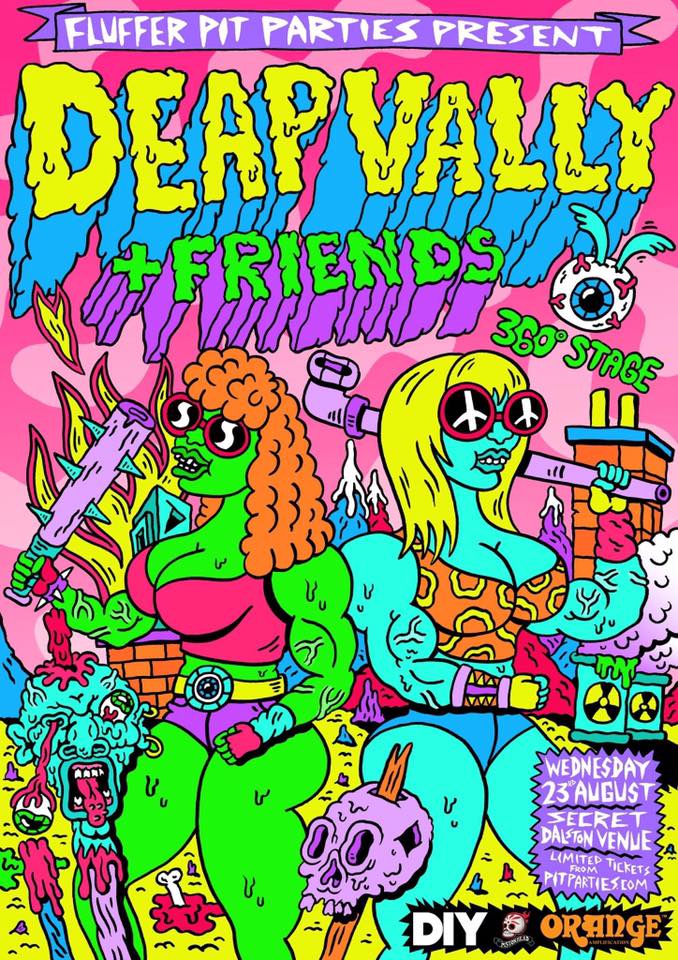 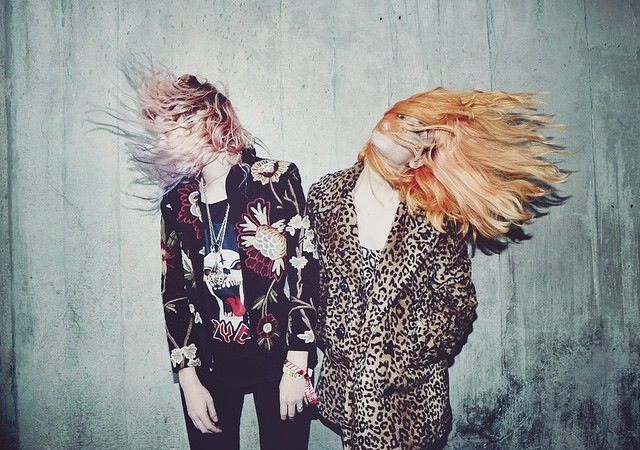