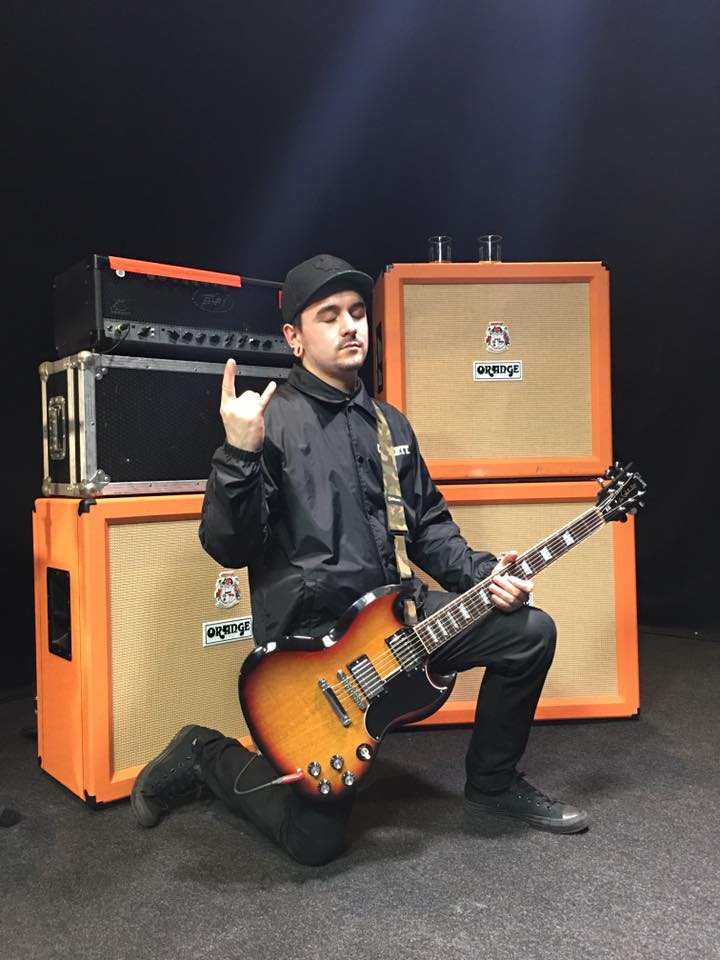 Hey man, who are you and what’s your deal?
My name’s Chris Pritchard, and I play guitar in Blood Youth. I actually wasn’t allowed music or music lessons when I was a kid because I’ve got ADHD, so when I wanted to get into music, my teachers at primary school and stuff wouldn’t let me, I had to kind of make my own way about that. I had a guitar at home, which was really bad, so when I started showing interest in that I eventually got a cheap guitar for Christmas, a Squier. I started playing that, but then swapped over to drums, which I played for about ten years. I actually studied that in UNI, and that’s what I wanted to be, a drummer. Eventually I decided I have to much energy for the drums, to sit there and be kept away, so I fell back into playing guitar. I’ve always loved that, and I think that’s my main thing.

That’s so odd though about your teachers, because surely you’d expect them to be excited for you to have this creative output?
It was probably the fact that they worried I’d use it to distract the other students, they just weren’t having any of it, so I would love for them to see what I’m doing today!

What kind of music sparked your interest and got you into playing?
I wasn’t really allowed to listen to the music I wanted to listen to – I wasn’t allowed Kerrang Magazine because they’d might have Slipknot in them, I wasn’t allowed anything with swear words or parental advisory on them. My mum would always listen through a record before I could have it, and I was so intrigued by Slipknot, KoRn, System of a Down, and all those early era Kerrang bands, and I’d end up paying my older sister to go into town to buy me Slipknot records and sneak them in without my mum knowing. My mum would always find them though, and hide them so I couldn’t get them. So, obviously having had all this kept away from me for all these years, my interest just grew stronger and stronger, so when I was actually allowed it was like this massive explosion where everything just hit me all at once. There was no smooth transition into anything like checking out one or two songs, it was full on binge listening and being blown away, and that was it, I’ve never looked back.

Well, I guess you must be preeeeeetty stoked about being endorsed by the same amp company as KoRn and Slipknot then?
Oh definitely, and Mastodon as well, I love them. I’ve been watching so many rig rundowns, and I especially love the Orange ones. Before I had the endorsement with Orange and I’d end up using rented backlines, every time it was Orange they’d always sound so, so clear, and would compliment distortion and this heavy tone so well, and I knew I wanted it straight away. I’m looking to get another Orange amp as well, but at the moment I’ve got two Orange PPC412 cabinets, and they sound sick – they are by far the heaviest things I’ve ever lifted though, totally worth it though. Plus they look killer! I want stacks of them, that’s the dream.