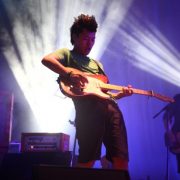 Guitarist, song writer, producer and band director, Sean Z has been busy of late. Following a successful tour of North America, the Vancouver based guitarist is currently touring Singapore and Malaysia with Wanting, a rising star in China.

Wanting Qu (also known as Qu Wanting; Chinese 曲婉婷) (October 10, 1983 in Harbin, Heilongjiang) is a Chinese-Canadian pianist, singer and songwriter based in Vancouver. In 2009, she became the first Chinese artist to be signed to the Nettwerk label; she is managed by Terry McBride. Her first album, Everything In The World (jointly released with Universal Music China in 2012) went platinum in China within its first week on sale, and her singles You Exist in My Song and Drenched were used in the soundtrack for the Hong Kong film Love in the Buff. Qu was raised in Harbin, but came to Canada at 16 to study.

Vancouver-based singer-songwriter, Wanting, releases her first full-length studio album, Everything In The World, on Nettwerk Records. Wanting, a self-taught musician with a voice similar to that of Chantal Kreviazuk, Anna Nalick, and Christina Perri, has been recognized in the early stages of her career. Having already sound-tracked the upcoming Chinese film Love in the Buff, appeared on a Mercedes Benz sampler, and amassed combined views of millions on Chinese YouTube, she is an artist to be on the lookout for. Wanting’s piano-swept music has won a following because her compositions pop musings that plumb emotion & resonate universally. The lilting first single “Life Is Like a Song” is a reflection on life s ebbs and flows and the cascading song “Drenched,” is about surrendering oneself to love. Meanwhile, “You Exist in My Song,” sung in Mandarin, is about old friends alive in one’s thoughts.