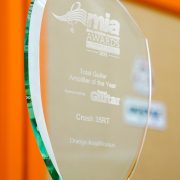 Orange Amplification Honoured For Fourth Year In A Row

Orange Amplification is proud to have won the Total Guitar, Guitar Amplifier Of The Year 2015 with the Orange Crush 35RT. This is the fourth year in a row Orange has won this prestigious award, which was voted for by readers of Total Guitar on the MusicRadar website. The award was announced at the 2015 Music Industry Awards, in association with NAMM, which took place on the 12th November at The Hilton London Metropole Hotel.

New for 2015, the Crush 35RT follows in the footsteps of previous Guitar Amplifier Of The Year winners; the Signature #4 Jim Root Terror Head (2012), the OR100H (2013) and the Dual Dark 50 (2014). Launched to rave reviews, the Crush 35RT is the largest, most feature laden model in the Orange Crush range. ‘It has plenty of classic and modern Orange tone on tap,’ said Total Guitar’s review, ‘sounding equally great at bedroom levels or cranked up with a band. Both the clean and dirty channels sound warm, fat and punchy, fooling you into thinking you’re hearing a much bigger valve amp, rather than a compact solid state combo.’

The event was a major celebration of the whole UK music industry’s best selling, most reliable and most innovative products, top retail initiatives and outstanding individuals and organisations. The awards were attended by senior figures from across the music industry.

Speaking about receiving this prestigious award for the fourth consecutive year, Cliff Cooper, Orange Amplification’s founder, CEO and winner of the 2011 Living Legend Award said, ‘It is humbling to realise that so many members of the public took the time to vote for our products once again. The whole team at Orange works extremely hard to ensure the amplifiers we develop and sell deliver what guitar players want. I would like to say a big thank you to all who voted for the Crush 35RT and to everyone at Orange.’

To find out more about the Crush 35RT and other Orange Amplification products please go to https://www.facebook.com/OrangeAmps and http://www.orangeamps.com/