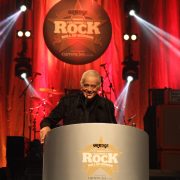 Orange Amplification proudly presents The Classic Rock Roll of Honour 2013. This is the third time Orange have been headline sponsor for these legendary awards, which applauds all that is great in the world of rock. The event will be held at leading arts venue, The Roundhouse, Camden, London, on November 14th 2013.

2013 has been an amazing year for classic rock, seeing the triumphant return of Black Sabbath, the launch of the critically acclaimed new Deep Purple album and Rolling Stones headline appearances at Glastonbury and Hyde Park. Black Sabbath will be receiving the Orange Amplification sponsored Living Legend Award this year.

Orange Amplifiers have been used for decades by many of the greatest Classic Rock bands of all time and this years awards see’s many of its endorsees nominated in several categories. Long time Orange Amplification fan Jimmy Page with Led Zeppelin are nominated for Best Film and Black Sabbath who used Orange Amps during the 70’s are in the Band of the Year section.

Orange Amplification have several endorsers nominated in the Album Of The Year category: Tim Salt (Clutch), Troy Van Leeuwen (Queens Of The Stone Age) and Scott Holiday of Rival Sons last years winners of the Breakthrough Act of the year. Up for the Reissue Of The Year award with Generation Terrorists 20th Anniversary are Welsh rock legends, Manic Street Preachers, with endorser James Dean Bradfield.

‘It is exciting to once again be sponsoring the Classic Rock Roll Of Honour and the Living Legend award,’ observed Damon Waller, Orange Amplification Managing Director. ‘ Orange Amplification is synonymous with rock history and its future. To be able to support the celebration of rock’s great achievements is something we simply love to do.’

To find out more about the Classic Rock Roll Of Honour and vote for your favourites go to http://awards.classicrockmagazine.com/ .