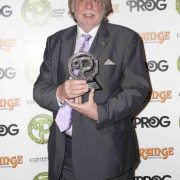 Above: Rick Wakeman with his Prog God Award

The Progressive Rock Awards 2012, sponsored by Orange Amplification, has been hailed as a huge success with massive widespread media coverage throughout the world. The inaugural gala event took place at the prestigious Kew Gardens on the 5th September 2012 and was attended by a glittering array of legendary progressive rock musicians.

Newsnight presenter and enthusiastic progressive rock fan, Gavin Esler, hosted the evening which honoured music acts past and present. He said: ‘I grew up listening to bands like Pink Floyd (who won the Grand Designs Award for the reissue of Immersion) and think it is about time we celebrated and rewarded the great British invention that is Prog Rock.’

The first ever Prog Rock Awards brought together progressive rock pioneers with newer current acts and its success proves that the genre is ‘in a rude state of health’ as Prog editor Jerry Ewing so eloquently put it.

The Orange Professional Cables Range Is Now In The Shops – Read ‘The Music...
Scroll to top