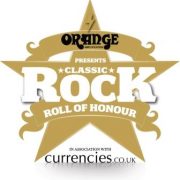 Orange Amplification proudly presents The Classic Rock Roll of Honour 2012. This annual star-studded awards ceremony celebrates the world’s greatest rock icons, performers, musicians and songwriters. It will be held at The Roundhouse, Camden, London on the 13th November 2012 with rock legend and Orange endorsee Duff McKagan hosting the evening.

Managing Director, Damon Waller, commenting said: “This is our second year as the headline sponsor and our partnership with the awards reflects our long association with supplying amps to the biggest bands in Classic Rock for over forty years.”

The Living Legend Award, which is also sponsored by Orange, is only ever awarded to those artists who have truly cemented their place in the rock hall of fame. Previous winners include Alice Cooper, Jeff Beck, Jimmy Page and this year it has been awarded to ZZ Top who, with a career spanning over forty years, have sold more than fifty million albums and continue to sell out arena tours around the world. ZZ Top is also nominated for the Band Of The Year award.

You can vote for your favourites at www.classicrockmagazine.com/awards