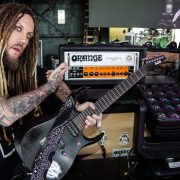 Longstanding user and new Ambassador, Korn’s Brian ‘Head’ Welch shares his thoughts about using his Orange Rockerverb 100 MKIII on tour and in the studio in a new video.

Welch, a founding member of Grammy Award winning band Korn and one of the driving forces behind the sound of the band, uses the Rockerverb to create, in his own words, a “buttery” clean tone. He will be taking his Orange Rockerverb with him on the up and coming Korn tour, playing sold out LA dates in March before touring Europe, followed by South and North America this spring. He also used his Rockerverb in the studio on the latest Korn album ‘The Serenity Of Suffering’ released last summer.

In the new video Welch, who has been using a Rockerverb for years, recalls that following his use of an Orange amp in a studio back in the mid 90’s he has always mixed the Orange tone into his music. Since then there has been an Orange Amp in every studio he has recorded in, for the last 23 years! Welch explains further ‘One of the reasons I started using the Orange Rockerverb MKIII live is because I was able to get such a smooth tone from my clean channel on classic Korn songs like ‘Falling Away From Me’ and ‘Here To Stay’’.

To find out more about the versatile Orange Rockerverb MKIII and the Orange Ambassadors please visit https://orangeamps.com.