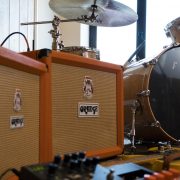 Orange Amplification’s latest combo amps, the Rocker 15 and 32, are small, light, and the best partner for any guitar players’ pedal board. Their performance and tone will take guitarists from the bedroom to live playing with ease.

The Rocker 32 is Orange’s most versatile amp yet: A portable, all-valve 2×10” stereo combo. At the heart of this unique amp is its valve driven stereo effects loop which opens up a world of limitless possibilities for pedal board users. The amp can be used as a ‘normal’ mono amp or be configured for Wet/Dry, or even true stereo for huge sounding panning effects. At 30 Watts (15-a-side) the Rocker 32 has plenty of clean headroom, but also features a handy half power mode to suit smaller venues.

The Rocker 15 is an amp for all occasions. Switching between 0.5, 1, 7 or 15 Watts of output it moves seamlessly from home, to studio, to stage. Despite its extremely compact 1×10” format, the tone is always fat and full, oozing warm valve compression and saturation. There’s also a valve-driven effects loop for total clarity from input to output.

The Rocker 15 and 32 have been designed by Technical Director, Adrian Emsley in the UK. Both amps feature an all-valve signal path plus a twin channel layout with an intuitive Natural channel. This channel features just a single control – Volume – and is perfectly voiced to bring out the natural character of different guitars and effects. The second, Dirty, channel has a more familiar look, with a three band EQ, and delivers the classic British grit that Orange is known for. Engineered with an emphasis on great tone and portability, both amps feature Orange’s new 10” Voice Of The World™ Gold Label speakers and the same beefy transformers found in the iconic Terror series.