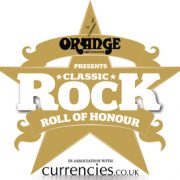 The winners at the 8th annual Orange Amplification Classic Rock Roll of Honour have been revealed at a gala evening held at the Roundhouse in London on Tuesday November 13th.

Among the other winners were Rush for Album of the Year and Band of the Year, Pink Floyd for Film/DVD of the Year and Reissue of the Year; Status Quo for Classic Album; The Damned for Outstanding Contribution and Rival Sons for Breakthrough. Anthrax were named Metal Gurus and manager Tony Smith was named VIP. The late Jon Lord was given the Tommy Vance Inspiration Award.

Lynyrd Skynyrd, who won the Comeback Award, played a 30-minute set for invited guests after a gala dinner.

Classic Rock editor-in-chief, Scott Rowley, said: “You would never know it from listening to the radio or watching TV – but while you were all getting excited about Psy and Fun and Nicki Minaj, it’s actually been a great year for new rock music. We’ve heard brilliant new albums from ZZ Top, Rush, Aerosmith, Kiss, Springsteen, Slash, Lynyrd Skynyrd and Van Halen.
Some great new artists are coming into their own: Rivals Sons, Tracer, Howlin’ Rain, Gary Clark Jr – the list goes on. Classic Rock is proud to keep on supporting rock music, classic and brand new, and the Roll of Honour has become an office party for the rock industry.”