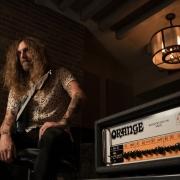 Canadian guitarist and songwriter, Nick Johnston, has become Orange Amplification’s latest Ambassador. The critically acclaimed musician, known for his fantastic tone, is delighted to be continuing his exploration of new levels of melody, harmony and composition with an Orange Rockerverb 100 MKIII.

Johnston is one of the hottest virtuoso guitar players around. He is much admired for his compelling ability to blend progressive metal seamlessly with thematic instrumental playing. Johnston’s distinctive approach is widely acknowledged as unique, drawing heavily on an extensive range of music genres from blues to classic sci-fi scores. The dramatic and mature combination of his musicality and natural storytelling skills allow him to paint vivid, luscious landscapes with his music.

He released his finely crafted, fifth studio album, Wide Eyes in the Dark, in April 2019. It is a timeless narrative which covers the whole gamut of the human experience. Johnston’s understated playing is full of complex, refined progressive rock ideas delivered with delicate sensitivity and finesse.Johnston’s newly acquired Rockerverb MKIII is a powerful and versatile amplifier full of the immediately recognisable British tone synonymous with Orange.  The amp is a mainstay for many touring artists and session aces, both on the road and in the studio. Talking about it Johnston said: “Not only is Rockerverb 100 MKIII the coolest looking amp on the planet, but it changes my playing in a way that makes me sound more natural, more organic and more like myself. It sounds massive, but it still manages to let my fingerprint shine through.”  Fans everywhere can’t wait to hear how Johnston’s tone will evolve with this new rig.