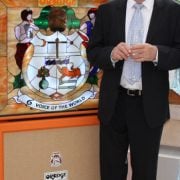 Cliff Cooper, the chairman and founder of Orange Amplification has just been awarded the coveted World Finance Magazine’s prestigious “Entrepreneur of the Year 2015” in Electronics for Western Europe. The magazine, published by World News Media, started the awards in 2007 to recognise individuals whose creative outlook, strong leadership and ability to drive through both successes and failures has led to business growth.

The British company has, in the last few years, developed the cutting-edge, award winning patented VT1000 Valve Tester, the revolutionary new guitar amp technology “DIVO” (Dynamic Intelligent Valve Optimisation), the “OPC”, a state-of-the-art Orange personal computer, the highly sought after “Crush Pro” amp series, which proved beyond doubt there is a place for solid state technology in guitar amplifiers. There is also the patented and innovative “Orange Musicboard”, which is set to redefine how music theory is taught in schools. Orange has also recently been granted a patent on their new innovative “Twister” cable.

The continued success of Orange Music Electronic Company Ltd has also been recognised in other ways. Between 2006 and 2012 it was awarded THREE separate Queen’s Awards for Enterprise and International Trade (Export), an accomplishment unprecedented within the music instrument industry.

Talking about the award Cliff said, ‘I feel deeply privileged; it represents the result of our enthusiastic world team. Innovation has always been the driving force behind the company resulting in our global success.”