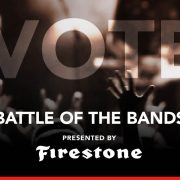 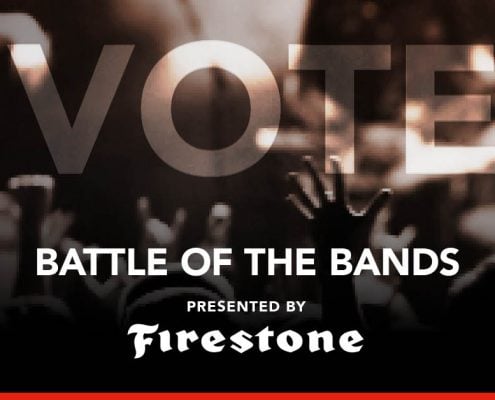 The Great British public are being urged to crank up the volume and appreciate the sounds of six talented unsigned acts, before voting on which ones should make the final of Firestone’s prestigious Battle of the Bands grassroots competition.

Around 300 acts have been whittled down to six and voting is now open at http://battleofthebands.firestone.eu/ for people to decide on who should take the final three slots, each of which will then be a step closer to making their big industry breakthrough. Once voting closes on November 23, the chosen acts will go onto play in the overall grand final on December 14 in Birmingham.

EL-Emcee, Sugarthief, Fire Fences, The Fleas, Super Furniture and Nuns of the Tundra are all on a journey to win the historic tyre brand’s nationwide talent contest, having beaten around 300 unsigned other artists to get to the shortlisted stage of the competition. A coveted Firestone trophy, more than £2,000 worth of Orange Amplification equipment and studio time worth £1,500 are all now within reach for the musicians.

Orange Amplification and returning partner Professional Music Technology (PMT) were faced with the tough task of judging the entries and agreeing on the six shortlisted acts.

Daniel Darby, artist relations and marketing at Orange, said: “It is so hard to make it in the music industry, so any competition that helps artists to break through is an in invaluable one. Battle of the Bands offers a real oppportunity for them, which is a brilliant.”

Professional Music Technology’s marketing manager Jake Marray said: “Battle of the Bands is such a relevant competition because it gives emerging artists and bands the chance to make a name for themselves. Many don’t have the budget for studio time and equipment can be very expensive too. Firestone have created something tangible and meaningful here.”

Both Daniel and Jake were part of a panel charged with whittling all of the entries down to six and they were fulsome in their praise of the quality of music on show.

“Each act is very authentic,” said Daniel. “The levels of self-belief when we were going through the entries was really noticeable. We were looking for acts who were doing things a bit differently and the final six certainly do this. This, combined with their passion and enthusiasm, has made for a very strong shortlist to vote on.”

Firestone’s brand manager Stuart Attfield said: “It has been a really uplifting experience to meet and listen to the shortlisted acts, all of whom have underlined why Firestone is so committed to music and promoting grass roots talent.

“Back in 1928, Founder, Harvey Firestone, brought together musicians and music-lovers on the Voice of Firestone, which gave known and unknown musicians a platform to perform on and an audience to perform for. This show was the first sponsored radio programme and quickly became the most successful entertainment broadcast of its time.

“Just as its tyres support drivers on the road, Firestone supports these rising talents on their Road to the main stage.”

“There is a diverse mix of talent with different styles coming to the fore. We believe that these six acts are the strongest that we have come across since launching Battle of the Bands in 2015 and we wish them all the very best of luck as they aim to make the final.”

The journeys that all six artists have been on with Firestone to get this far have been brought to life and can be also be viewed at battleofthebands.firestone.eu. Meanwhile, votes can also be cast on the same website.

A Choice Not A Compromise: The Case for the Rocker 15
Scroll to top