Fang Island describes its sound as “everyone high-fiving everyone.” And, the Brooklyn quintet’s anthemic and soaring songs make it quite possibly one of few bands befitting such description.

Its finger-tapping guitar lines, chanted vocals, triumphant harmonies and overall perky songs hearken to the sort of “Total Music” of the Fucking Champs, Jay Reatard, Ponytail, Kraftwerk, Marnie Stern, Thin Lizzy, et al. But, perhaps more so, its songs are like the music in your head at that moment when everything feels just right; that first kiss, that high score on the video game, buying your first small nation in cash… you know, good stuff.

Fang Island began, oddly enough, as an art school project while the band members were attending the prodigious Rhode Island School of  Design (also the foundation for Yeah Yeah Yeahs, Les Savvy Fav, Lightning Bolt, Six Finger Satellite and some band called the Talking Heads.) According to guitarist Jason Bartell, the goal was to “make music for people who like music.” That is, music without irony that harnesses its uplifting qualities. Just like a classic rock song or classical symphony can stir us emotionally, Fang Island exists to unlock that spirit.

Fang Island is guitarist Jason Bartell, guitarist Chris Georges, guitarist Nicholas Andrew Sadler, and drummer Marc St. Sauveur. They all share collective group vocal harmonies and the occasional hand claps. While Sadler is also known for his role in the debauched rock band Daughters, it is only his fretboard skill that translates between the two groups.

Fang Island begins appropriately with the sound of erupting fireworks on “Dreams of Dreams” leading into a cascading chorus of ringing guitar notes before the group vocal harmonies chime in with the mantra, “they all are within my reach, they are free.” The second song, “Careful Crossers” launches in beneath the vocals with a chorus of gleaming guitar harmonies smeared over the marching, syncopated rhythm section. Elsewhere, tracks like “Sideswiper” hearken to the metal-laced positivity of Andrew WK. ” Daisy” sounds like a unique collaboration between the Fucking Champs and Jay Reatard.

Throughout the album, it’s like listening to the cool version of classic rock — the type of anthemic pop — without the cheesiness — that you wished Journey and Boston could’ve made. 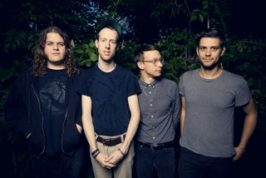