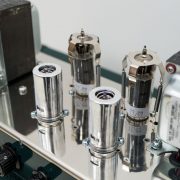 A new month, a new subject! September 2019 is ‘Voice of Innovation’ which means we will focus on our, well, slightly more ‘innovative’ amps. In 2017, Lead Amp Designer and Technical Director Ade Emsley was presented with a ‘People of the Moment Award’ at the MIA Gala Dinner, with the judges claiming Ade’s name was “Synonymous with innovative design, and that he is known and revered worldwide.” So yeah, we’re pretty innovative over here…

The discontinued Tiny Terror was a revelation when it first came out, and still remains so this day today. Created by Ade Emsley, the Tiny Terror was the original lunchbox amp which set the bar (high…) for those who were to come after. The Tiny Terror was initially an idea at a NAMM dinner where Ade wanted to make an amp that could fit into an A4 piece of paper, and just a week later, the prototype was a reality. About the amp, Ade has the following to say:

“The concept of the Tiny Terror was an amp you can carry anywhere. You turn up to play a gig and there are three bands playing. You turn up with your Tiny Terror it’s gig bag and your guitar. Before the gig you’ve sorted out the use of a mate’s 4×12 in one of the other bands. Plug in with the volume on ten and the gain on about six and suddenly you’re into 1980’s AC/DC territory.”
Ade Emsley

With the Pedal Baby we’ve captured that original rock ’n’roll sound, and we can’t describe it better than Brant Bjork, who at this point had been using the Pedal Baby for about 2 months, had to say about it at Black Deer Festival:

“The sound I’ve always wanted is the sound Hendrix had, playing through these huge stacks of amps, that original rock ’n’ roll sound. Unfortunately for me, the venues I generally play aren’t normally big enough to bring in that amount of amps so when I was recommended the Pedal Baby I was so amazed that this tiny thing had managed to replicate such a huge and iconic sound.”
Brant Bjork

The Pedal baby, which is a 100W class A/B power amplifier is designed for the touring musician as it’s easy to lug around with it’s neat size. As it’s fairly neutral sounding, it’s also perfect for pedal boards, modellers and digital processors.

The Crush Bass comes in three different variations; Crush Bass 25, Crush Bass 50 and the Crush bass 100. Here, we’re focusing on the Crush Bass 100. Despite it’s neat size don’t let yourself be fooled, the sound is huge and works well in small venues and for terrorising the neighbours at home (Trust me on this one, I’ve got one and the sound travels – far…) For the Crush Bass 100, we’ve taken the Blend and Gain controls from our equally popular OB1 Series with those in mind who plays around with guitar and bass amps at the same time so you get the layers, harmonics and distortion from the guitar amp, with the core bass tone from the bass amp.

In the Rocker 32, we like to think we have captured what might as well be the perfect pedal amp. The Rocker 32, which is an all-valve stereo amp can either be run like a ‘normal’ combo straight in, or with mono effect loops, the latter working well if lots of delays and huge soundscapes is your thing. If not, stick to option A and go for the ‘wet/dry’ mode to separate effects to one speaker, and clean guitar to the other, which creates separation on stage.

Protected: Can you guess which Orange amp these artists used?
Scroll to top