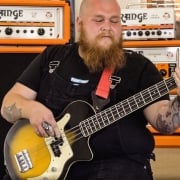 Hailing from the Black Country, Wolf Jaw are very much flying the flag for, as they describe it “thunderous rock and roll.” Listening to their huge songs and riffs, you can’t help but imagine their live shows are a force to reckoned with. Bass player Dale came in to try our amps and the O Bass and was blown away. In this interview he chats BMX accidents, Orange stacks and amp reliability.

I used to ride BMX with the guitarist and I actually broke my leg and I was six weeks off school. I ended up in a cast and my dad went out and bought me a bass and gave me a Black Sabbath album. So I listened to that and since then it’s been all that I have wanted to do, is play like Geezer Butler, the tones he gets and just the whole Black Sabbath thing is incredible.

I’m using the OBC810, that thing is a monster, it really lets loose, it pulls all the clarity and mids out, you get that bottom end that drives straight through you, its incredible. Playing the AD200 it just brings so much clarity to the sound and it has been something we have been able to work with Custom Shop 50 and the AD200 together, it is something we have been able to craft together. The tones they just work, you can’t describe it having a full valve bass amp is completely different to anything else. You get the feel when you try to drop down and play something a little quieter, you get the clarity. And when you want to go balls out, that is where the drive is.

Last week I was doing Sweden Rock and to fly into there and know you have that sound behind you, that tone doesn’t change, that is the way it is and it always will be. You get there and it is so simple, you don’t have to set it up, to change your tone is a turn of four or five knobs and that is all it will ever need to be. That is what got me into the amp, the simplicity, I don’t need to be able to EQ every stage of my sound. I just want to get there, crank it and know that sound is going to be there, balls to wall, all the way through. That is the most enjoyable part of owning an Orange to be honest. 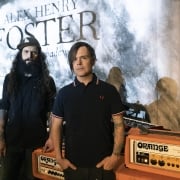 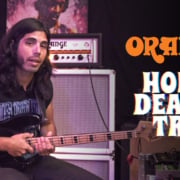 Ambassador Steve Bello: How A Metalhead Became an Orange Fanatic
Scroll to top