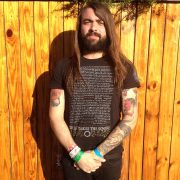 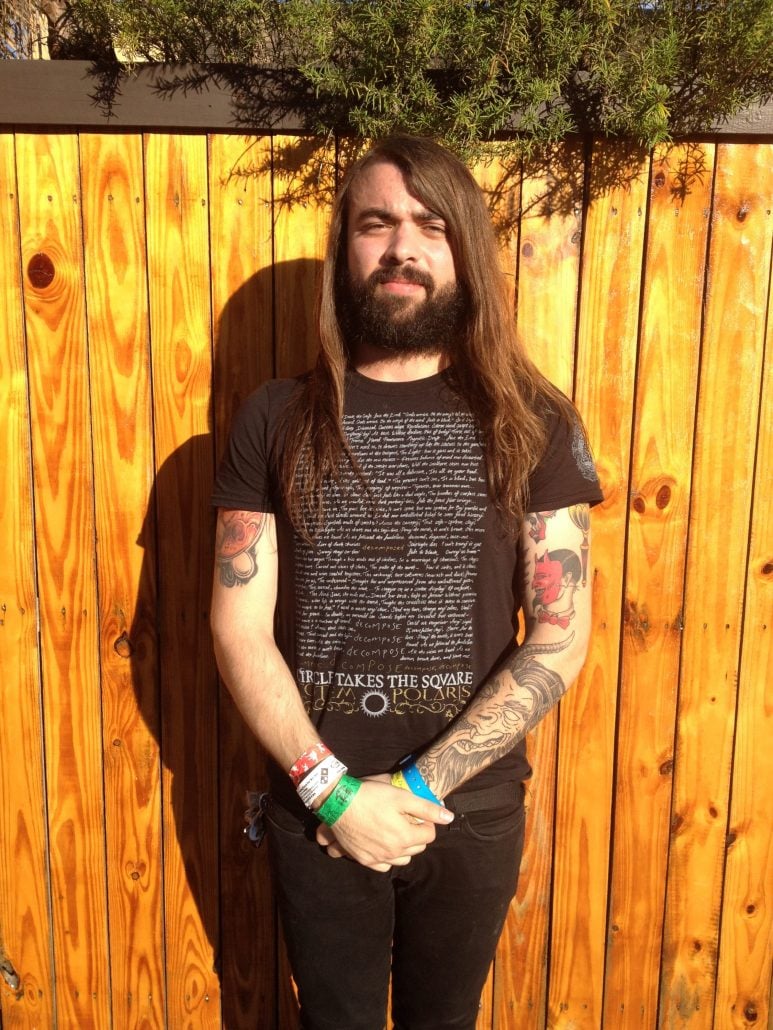 Chris Teti, guitarist for The World Is A Beautiful Place

Chris: My name is Chris and I play guitar and trumpet in The World Is A Beautiful Place & I Am No Longer Afraid To Die.

Orange: Quite a name, I won’t ask any questions about it because I’m sure you’re tired of it.

Chris: Yeah it’s a lot, I just make stuff up now even though I wasn’t in the band when it first came out.

Chris: The band was around for about a year or two before I joined so I want to say about four years. I joined about two and a half years ago.

Orange: You put out a lot of music in that time frame.

Chris: Yeah we have a couple EP’s, a split, a four way split, and a new LP finally.

Orange: And how has the response to Whenever, If Ever been going?

Chris: Oh it’s been really good. It felt so good to finally release it because we’ve been working on it for so long and the recording process took a while because we recorded at a couple different studios. We recorded at a studio in Massachusetts and I had recorded a bunch of stuff as well at the studio I work at. The response has been going really well, when the record leaked we played in Boston the next day and kids knew the words to all the new songs we played.

Orange: So it’s been a lot of fun playing the new stuff?

Chris: Yeah it’s really nice because we have been playing the previous songs a lot and when the record came out we could play everything we’d want.

Chris: I think my favorite is Heartbeat In The Brain because it ends kind of sludgy, and it might be my favorite song off the record actually. It’s really fun to play.

Orange: What do you take inspiration from personally?

Chris: I’d say when we recorded I was listening to a lot of Engine Down and Failure. I try to just make weird sounds, I’m not the greatest at writing the bare bones rhythm on things. I better at weird layers and weird leads. I’m better at like spacey stuff.

Orange: So when did the recording process start?

Chris: The recording started in June or July of 2012 and it ended about February 2013. So it was a long process, the tracking was spaced out. Most of the instrumentation within the first couple of weeks of that actually and we had demoed out and started writing songs a year before actually. We wrote more songs cut some, we cute a song right at the end of the recording process right before it was going to be mixed.

Orange: Do you ever play that song live?

Chris: Yes we do play it live, it’s mostly vocal driven, the instrumentation is pretty sparse. We do play is live occasionally, it’s hard sometimes because we have a loud crowd and it’s hard to translate.

Orange: How did you guys all meet?

Chris: Greg and I specifically went to high school together and played in bands since I was like 14. I grew up with his sister. Through playing in bands in Connecticut we all kind of met each other. Steve played in Greg and I’s old band My Heart To Joy, he played drums right at the end and it was just our bands playing together really.

Orange: Do you ever miss playing in My Heart To Joy?

Chris: Honestly not really. It was fun while it lasted and I’m much more happy now with this band.

Orange: Of course, you guys do an incredible job. I remember catching you guys at WonderRoot in Atlanta and the show basically sold out, people were pouring out of the venue and standing outside because they couldn’t get in.

Chris: That show was so awesome, that place was great.

Orange: So what equipment do you use?

Chris: Both Derek and I use the same type of head. I use to use a Fender Twin Reverb, then I used a Peavey VTM 120, and then on our US tour this Summer I bought a 5152 and have been using that into an Ampeg V4 cab. Just got a Gibson Les Paul double cutaway P-90’s and my pedal board is constantly changing, just different pitch shifters, delays, and reverbs. I literally forget what’s on there sometimes. I just got paid for a record I was working on so I’m just going to buy more pedals.

Orange: So who are some bands that played Fest you recommend people check out?

Chris: Definitely Weatherbox, Code Orange Kids they’re always insane, Fucking Invincible is awesome, Lovechild they used to be in a band called Cerce that we toured with, Laura Stevenson and the Cans, Sainthood Reps, Sleepytime Trio. I’m sure there’s way more, trying to narrow it to like six.

Orange: What’s been your favorite set so far?

Orange: So, you have any weird tour stories?

Chris: Alright, we were doing a late night drive last week from upstate New York to West Virginia and we were changing seats in the van and we found this weird public access radio station, I don’t think it was a college radio station, but they were playing like weird ambient spacey creepy stuff and we called it like “Hell radio” and it was great. It’s like driving through the woods in upstate New York to the scariest music I’ve ever heard. It was awesome though, and it made that drive so much better.

Orange: How was going out with Brand New?

Chris: That was awesome, they’re one of my favorite bands. Actually when we were writing the record I was listening to them a lot. It was awesome definitely the wildest tour I’ve ever done. The reception was really good too. I think all the dates sold out before we actually got on the tour so it was kind of up for grabs whether people knew you or not or you were going to be able to win them over. Everyone in Brand New was super nice to us.

Orange: You’re on the road a lot, have you had any time to write anything new?

Orange: So when did you first see an Orange Amplifier?

Chris: Definitely when I was younger, I actually use an Orange cab at the studio I work at all the time.

Orange: What’s the studio you work at?

Chris: Silver Bullet Studios. We’ve done like Hostage Calm, Make Do And Mend, The World Is…, Misery Signals, a band we’ve worked on recently called Life In Your Way they’re actually sponsored by Orange we use their cab.

Orange: What head do you use at your studio?

Chris: I have a bunch of heads. I have a Peavey VTM 120, Acoustic 150, Peavey 400 Bass, 5150 multiple versions of that, Fender Twin Reverb, I actually had an Orange head come in recently it was the Thunderverb 50, which is actually sick because I use to use a Fender Twin live with an over drive pedal and I actually like the Thunderverb 50 a lot because the cleans are really good and then the overdrive was as if I had gotten the best pedal ever with the Twin like one I was always searching for.

Orange: So there is a lot of you what is your bands tour diet on the road?

Chris: It ranges pretty hard because I’m a vegan and so is our keyboard and cello player. Greg is vegetarian and everyone else eats meat which is fine. We try to eat as healthy as we can we try to get fruits and vegetables but sometimes it definitely comes down to the Taco Bell late night add potatoes substitute meat. It’s pretty easy, at gas stations it’s a little grim I’m like well do I want Oreo’s or potato chips but I find something.

Orange: Well thank you for talking with me man!

Orange: Is there anything you’d like to add about where people should check you out or anything?

Chris: We have most of our stuff up for free online on our bandcamp or Topshelf Records bandcamp.