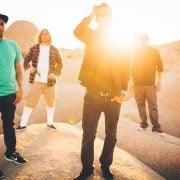 The main aim of this blog post is to update you on tracks that I’ve enjoyed  in the past two weeks. It’s all about getting music you haven’t heard before into your life and discovering new sounds.

We kick off with Deftones, who have released their first new track in over 4 years. This track is going to be the opener for the upcoming album Gore. Led by synths, it doesn’t take long for the guitars to come in and it’s back to their classic sound. It’s going to be great to see them on the road again over the Euro Festival season.

I Don’t Cares – Born For Me

Paul Westerberg and Juliana Hatfield make up the I Don’t Cares, who have just released their new album last month. Paul of ‘The Replacements’ fame has teamed up with Juliana to create an album full of quite cheery pop rock songs. ‘Born For Me’ is one of the great moments on the album and deserves to be heard.

One of Mogwai’s more ethereal moments, the song ‘Ether’ is the opening song from the band’s upcoming album, which is to be released later this year. The instrumental track, complete with horns, builds by adding swirling guitars and gets you ready for the rest of the album, I can’t wait to hear it.

Toronto band Dilly Dally play grunge music and are massive fans of Radiohead. They also do an amazing cover of Drake’s ‘Know Yourself’ which turns it into a scuzzy, sprawling epic. ‘Desire’ is just a great grunge song, it’s great to hear people playing scuzzy music.

From Finland, Hexvessel are made up of members of Grave Pleasures and play Psychedelic Forest Rock. This track is part of their latest album and is a piano based, Pink Floyd-esque song.