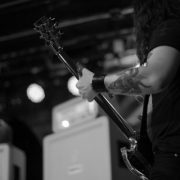 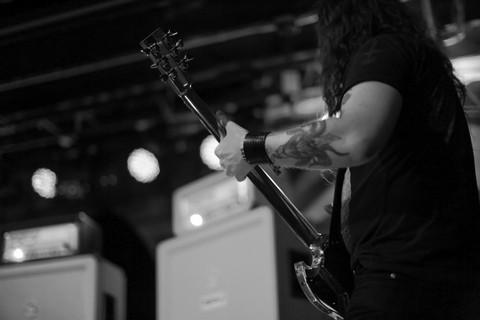 Stephen O’Malley is one of the reasons I got into loving guitar amplifiers. O’Malley has played in numerous bands such as KTL, Khanate, Burning Witch, Gravetemple and also performs as a solo artist. However, he is probably best known for his work in the band SUNN O))) (named after an old amplifier company). My first experience of SUNN O))) was sat in the front room at a friends house and he played me White One. I was instantly fascinated. A few years later I saw them perform. It was sonically crushing and the oppressive nature of a wall of amplifiers was the light bulb moment for me when it comes to what an amplifier really is and what to can do to you. I also realised what it means to have ‘tone’.

Stephen O’Malley’s thankfully plays more than one amplifier brand and we are lucky that he sometimes uses Orange. We asked him about what he likes about Orange and what Orange amps he’s used.

First off, your amplifier collection must be quite varied and large! What is it that you look for in amplifier?

I do have a lot of amplifiers, but not as many as a lot of people I know and of course have my dream quest amps I’m searching for. On tour recently I borrowed a Swedish friend’s old [OR] 120 and wow, that amp sounded great. Body, clarity, tone, power and character. Those are all elements I look for in a guitar amplifier and Orange has these characters. I prefer the higher Wattage amplifiers myself, and many are hard to find for backline in many areas. But Orange has a wide reach… this allows a great tone options while flying in to play and record in places like Mexico City, Rio, Sao Paulo, Tokyo, Melbourne, Seattle, Oslo, etc.

What Orange amplifier(s) and cabinet(s) are being used in your current live rig?

I am a devotee of SUNN O))) but the Orange 4×12 cabinets are my preferred commercial cabinet. I also like playing the Rockerverb 100 and 200 Watt amps here and the vintage 120s* of course. In my flat I have a great Orange Rockerverb 50 combo for writing, and for local recording appointments.

How do you like to set the amp up?

I actually prefer a clean amp sound with tons of transparency and headroom, fit with vintage preamp tubes which I can drive simply with the power of my Travis Bean guitar. I’m really into effects but they are the frosting on the clear/direct tone of the guitar, not the overall tone of the sound I like.

The current Orange amps you are working on, are the tubes stock or do you have a preferred brand? If so, which?

Actually I am well satisfied with the stock tubes, eventually I’ll probably drop in sole vintage pres but the tone is great already.

I just released an album called ÄÄNIPÄÄ “Through a pre-memory” on Editions Mego, which is primarily a collaboration with the with the great Finnish electronic guru Mika Vainio of PAN SONIC, and also features Alan Dubin from KHANATE and Gnaw. SUNN O))) is releasing a collaboration album Norwegian progressive band ULVER in February 2014.

We also finally started a website… we are a slow band in all aspects. Folks can find a lot of information about the band, as well as a selection of merch (vintage and modern) on the Southern Lord website. SUNN O))) has a bandcamp where you can preview and buy our entire catalogue to date. I also have a personal website/blog which details live action, gear, art, interests, etc. Thanks for listening!

Thanks to Stephen O’Malley for his contribution to the blog.


Read another great interview with Stephen O’Malley at Brooklyn Vegan