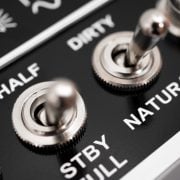 So other than the look, what’s the difference between them?

The Rocker 15 Terror has the classic Orange sound with fat mids and it’s got a gain control that allows you to clean that channel up if you want to. The Brent Hinds Terror, is more about Ade Emsley’s (our Technical Director) take on the hot rodded 70’s and 80’s amps that we all know and love, which is exactly what Brent Hinds wanted. It gives you a more aggressive upper mid-range and a gain control that brings a distortion right in from the get-go.

Both amps have a single knob natural channel which harks back to our Rocker 30 amplifiers of the early 2000s which a lot of people are still using today. Feedback on this channel was that people wanted it to be brightened up a little which is exactly what’s been done on the Rocker 15. However, the Brent Hinds is closer to the original Rocker 30.

We’ve made our own video going through some of the differences between both amplifier heads (see above). We also have have audio samples on the amps product pages which help you hear the difference between them. If you’re still wanting more, there’s a few comparison video’s appearing on on YouTube from various channels. Here’s a selection below:

Photos from NAMM 2018
Scroll to top