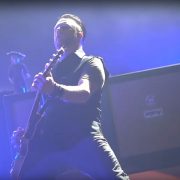 Hey whats up, I’m Troy McLawhorn i’m the guitarist for Evanescence, I’m here in the U.K.  at the Hammersmith Apollo and I play Orange Amps.

I saw Orange amps in music stores when I was a kid, its hard to say though the exact first time I saw one, probably in a photo of Jimmy Page or someone when he was playing one on stage.  I was like what are these stupid symbols on the front, what do they mean! How do you control them! But they looked really cool, they looked totally different from most amps you saw back then. Everything was black and everybody was trying to look like 80’s metal but Orange definitely stands out.

I think the first time I played an Orange was probably in the studio, when you’re in the studio you try anything that is around for different textures and stuff. As a matter of fact, I think in Atlanta some friends of mine owned a studio and they had Orange, that was probably the first time I got to try one. The reason I really liked Orange is I’m always looking for something a little different from whatever everybody else is playing at that moment. The fragile high end of some amps, its something you wrestle with and you have to have all these other things to make it sound good. I really like that Orange has got a really nice, smooth high end to it, I was always really attracted to that.

I don’t change my rig in the studio unless i’m asked to but the way I run it live, I like the tone of it. I use a cable, I don’t use wireless and thats part of it because you have to EQ the amp because you are losing some high end through the cable. I also have a buffer that boosts the signal back into the amp, so I try to run exactly like I do live because to me that is my tone.

I didn’t even really try a bunch of amps, a friend of mine suggested the Rockerverbs and I checked into it. I went to the website and saw bands that are kind of heavy with that type of guitar sound which was what I needed to play in this band, I saw Jim Root and people like that were playing them. So I got one and it sounded great, so I got another one as a backup.

I got to say, legends have played Orange and it feels really good to reach a point in my career where to be associated with such a great company and all the artists it represents. Its pretty damn cool, you know Orange has taken really good care of me, I’ve not got that type of treatment from anybody, so thank you!