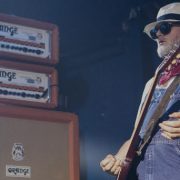 This is Rune Rebellion from Turbonegro at Desertfest, London.

My dad was in a band in the 70’s, like a rock band, well he’s a Jazz musician but in the 70’s you couldn’t make any money playing Jazz so he had to! So he had like a Deep Purple/Tom Jones cover band and I was like 7 and I got to come along to soundcheck, help him rig the gear. There was a guitar player who had just bought a new Orange rig, wow amazing, he plugged in and I was like Wow! this was my first true rock n roll experience.

This is the exact same guitar player that rumour says they were playing a wedding and he ended up in bed with the bride, thats rock n roll!

First time I played regularly was like 10 years ago, since then I have been using it all the time, its become my, the love of my life. For the studio I mostly use the 50 Watt and also when I do club shows but for festivals there is the 100 one, to step it up a notch.

Obviously Orange has become the mainstream amp for rock n roll these days, you guys are doing a really good job of reinventing the brand and the sound, so ye it works for me and obviously for a lot of other guys as well.