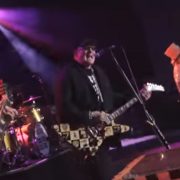 Tuk Smith – Rick thanks for meeting.

Rick Nielsen – Happy to be here.

Tuk – We are going to talk about some good shit. In the early days, you guys did 300 shows a year plus, you’ve never quit touring. You tour now more than any other band, what is your secret?

Rick – You got to like what you are doing and people have got to hire you, if we weren’t hired then I don’t know if we would be out quite as much. But about eight years ago we said maybe we shouldn’t tour so much, so we should raise our price and that didn’t stop anything, so we should have raised our prices ten years ago!

Tuk – I’ve heard you have a really special Orange amp? It’s an early one?

Rick – That one right there, right in the middle, I think it is the first one ever made. Basically I bought it from Orange music, in London, I bought it from Cliff Cooper who started Orange.

Tuk – What year was this?

Rick –  It was somewhere between 1968 and 1970, because I bought my Mellotron, my first Mellotron from Cliff Cooper, it was used one over in London and I had it shipped over by boat. It was on the first album of Fuse in 1969, we recorded in 1968 so that would have been in.

Tuk – So you’re a self proclaimed hoarder?

Rick – Ye! So this is number one and the guys at Orange told me they made four of them and they haven’t even seen one, so that’s the very first one, very rare. So I’ve had it for forty or something years. Except for the emblem being bust, its perfect.

Tuk – Do you ever track in the studio with Orange?

Rick – I track in the studio with it yes, its got a punch, its got great punch to it. Then Orange was kind enough to build me another one and they made a chequer board for me. Its a little different configuration, looks a bit different. But then about a month ago I was in Seattle, went guitar and amp shopping with Mike McCready from Pearl Jam and I walk in this store, they were all looking at this and that. Then I go BOOM! I point over and that was down on the floor, that is a direct copy of this same one I already have, so I have got two of the four.

Tuk – Have you ever thrown a pick into an orifice, a mouth or an eye ball and was there a lawsuit?

Rick – A lot of cleavage, that is where it is usually drawn.

Tuk – Tell me about the cameo in the Fat Boys movie, because that was fucking wild.

Rick – See they wanted a really crappy actor and they got it. I can’t act, I can react, I’m a pretty good reactor! But as far as acting…

Tuk – I think your rat tail sold it though, you had a nice one.

Tuk – Well if you need somebody cute, to play rhythm guitar Rick, so you don’t have to do all the duties, I’m right here buddy.

Rick – Well why don’t you play with us tonight?

Tuk -Well I didn’t know you were serious Rick but that is awesome!